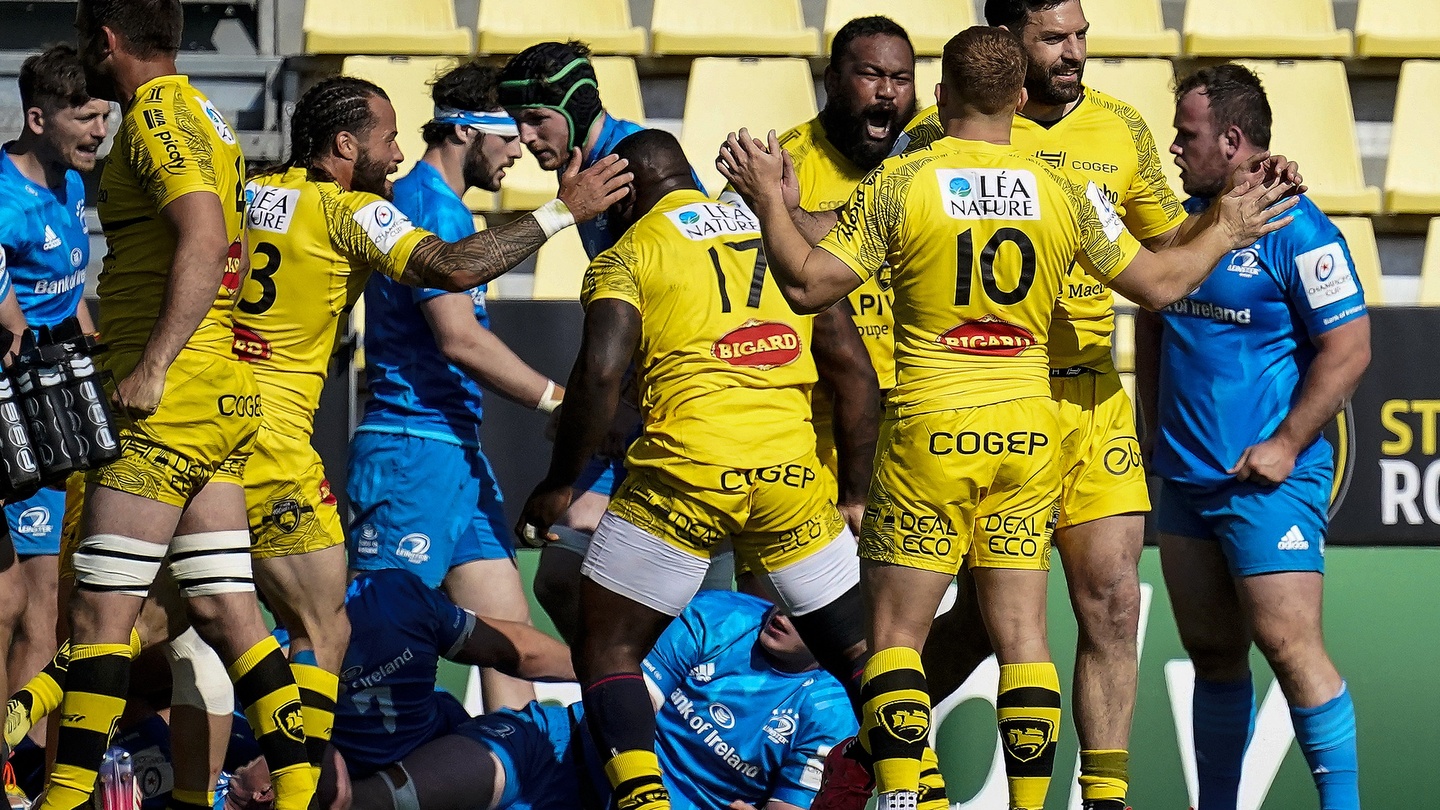 La Rochelle Keep Ball Alive, sure, but there's a lot more depth to them than just an acronym.

You don’t have to be reading my work for long to get that I have a bit of an obsession with size, power and collision winning. I just realised I could be talking about anything from sumo wrestling to monster trucks to NFL when I say that but the hard reality of our game is that the team who wins most of the collisions usually wins the game. I’ve heard and read all the points made about playing like Japan but using three games across two World Cups against three teams on the slide (and with some generous home town refereeing in two of those three games) isn’t a basis for proposing a successful game model – it’s a prayer that physics will stop working.

Lots of guys in my mentions remember Japan playing with width, tempo and ✨offloads✨ with crystal clarity after every example of the physics of this game but the same people never seem to remember them getting pumped back 50m in a maul against the Springboks in the World Cup quarter final on the way to a dominant loss.

This is a natural reaction, though. When you lose in what seems like an inevitable way, one of the most consistent things you see in the aftermath is a reflex that says “we don’t want our game to be like this”. I had a correspondent who wrote to me after the match and said;

“I don’t want rugby to be about whoever is the biggest and strongest winning all the time. Where is the room for passing, a bit of magic or guile?”

I’ll write here what I wrote back to him. The game has always been won by the bigger, stronger team when everything else is relatively equal. When the bigger team has a cardio problem – increasingly rare in 2021 at the top level – a smaller team can outburn them in different segments of the game. When the bigger team has a core weakness in their kicking mechanics, a smaller team can look to exploit that with a smart, constant kicking game. When you have an overwhelming skill advantage, a smaller team can beat a bigger team but the level of handling skill and cohesion required by all 23 players has to be significantly greater than the power differential to play out over 80 minutes and, even then, it is increasingly rare that such a skill differential can (a) even be realistically coached or (b) be anymore valuable than size and power when you consider the wider game plan implications it would require to implement successfully.

Leinster found this out on Sunday when they lost to La Rochelle for the very same reason that they usually win games.

When Leinster beat you and beat you well, it’s because you lose most of your collisions against them on both sides of the ball and can’t find a way to play around that reality over the course of 80 minutes, be it through the boot or otherwise.

La Rochelle’s game, on the other hand, was tailored to make the most of their expected collision dominance while maximising the effectiveness of their core power forwards for as long as possible with smart role division and other energy conserving tactics.

In the lineout, for example, Leinster had 11 successful takes on their own throw in part because La Rochelle didn’t counter-launch once. It seems like a small thing when you think about it, but it’s a smart tweak to a game plan that aims to keep guys like Atonio and Skelton on the field for as long as possible. Every counter-launch on an opponent’s throw eats up energy for lifters and jumpers, not just in the act of lifting and jumping but when you’re tracking, shuttling and staying crouched in launch positions. So taking that energy expenditure out of the game leaves space to invest elsewhere.

If we look at the output of Atonio, for example, he only had 10 direct on-ball involvements – five carries and five tackles. He lifted a fair bit on La Rochelle’s throw and mainly helped collisions to be won at the breakdown and as a secondary carrier in combination with someone like Aldritt or Skelton.

Defensively, La Rochelle loaded up a lot of impact defence duties onto Vito, Liebenberg and Wardi which allowed Bourgarit, Alldritt and Skelton to play more balanced roles but, mainly, allowed them to focus on impact ball carrying when La Rochelle were in position. Those last six words are crucial because they build into La Rochelle’s kicking strategy for this game.

La Rochelle kick quite a bit but how they kick is really important. Just looking at the raw numbers, you see La Rochelle with 23 kicks compared to Leinster’s 21 but the point of difference is in the length of the kicks. La Rochelle kicked an average of six metres longer per kick than Leinster and used kicking more proactively.

Even from their restarts, you could see a direct strategy to target Leinster’s deep left backfield to force McGrath into exiting.

They also had no issue in taking kick chase pressure options to the flank nice and early to challenge Leinster where they have shown to be less than elite – their fielding and back field positioning. Sure, Leinster really used the sun on Leyds to great effect in the first half but La Rochelle’s kicking strategy looked a little deeper, to me.

You can see the roots of La Rochelle’s energy conservation here too – they kicked away decent field position in Leinster’s 50-22 to pressure the wings and backfield cover.

La Rochelle kept targeting the left backfield on their restarts. Keep an eye on Skeleton here too – he was always on the non-target side so he wasn’t under pressure to make up the defensive line immediately. All this conserves his energy. La Rochelle would have been aware of Leinster’s desire to “move their pack around” because that’s one of the things you do, or try to do, when you have a power differential.

Even then, who looks like they are expending more energy on the below sequence?

When it comes to kicking tendencies, elements of this 22 sequence seems unusually panicky from a Leinster perspective, even if we accept that they were looking to stretch La Rochelle’s cardio and find Skelton in the middle to wider channel.

Even then, how is Skelton playing 80 minutes? He isn’t counter-jumping, he only jumped in the lineout once or twice and was mainly a lifter/mauler when he wasn’t standing in midfield as a ball carrier, he isn’t expected to cover massive amounts of ground defensively and he didn’t move outside of the middle of the field offensively for the entire game.

When you have a dominant ball carrier like Skelton (and Aldritt) you want to make sure they are in position to pressure the opposition physically and La Rochelle’s kicking played into that too.

Watch the below sequence.

This was far from the only example. La Rochelle kicked long to limit Leinster’s use of Byrne or Lowe to exit long. Leinster’s box kicking under pressure has been a constant issue for them – Munster have tried to target McGrath and Gibson-Park in a similar way over the last two seasons to mixed success tactically – but La Rochelle had the collision dominance and a strict breakdown referee to hurt Leinster consistently when they forced them back into their own territory, be it off the restart or through their own kicking game during phase play.

Leinster never really kicked proactively during the game, as if they wanted to maximise every phase play opportunity to build phases and “move La Rochelle around”. When La Rochelle spotted opportunities, they had no issue kicking proactively.

When I watched the game back, I was surprised to see Leinster only ever kicking to exit long through Lowe with this crossfield kick on penalty advantage and Byrne kicking through on a transition being the exceptions.

Offensively, La Rochelle showed some of the same kind of layer separation that we’ve seen a lot of French teams use.

Racing 92, another team coached by O’Gara, use a similar depth to their attacking layers where the backs are recessed quite a bit behind the line of the forwards.

Here are a few examples;

This kind of depth from the gainline works because the passage of the ball happens well ahead of the effective range of Leinster’s defence and the threat of the forward pod creates lateral space for La Rochelle to attack.

This combination of effective forward carrying threats combined with deep runners not easily blitzed or tracked by Leinster’s defensive line means that La Rochelle always seemed to be operating just outside Leinster’s reach.

The physical dominance of Skelton, Aldritt and others certainly helped but it was La Rochelle’s smart kicking, restart strategy, and powerful ball carrying when they worked their way inside Leinster’s 10m line.