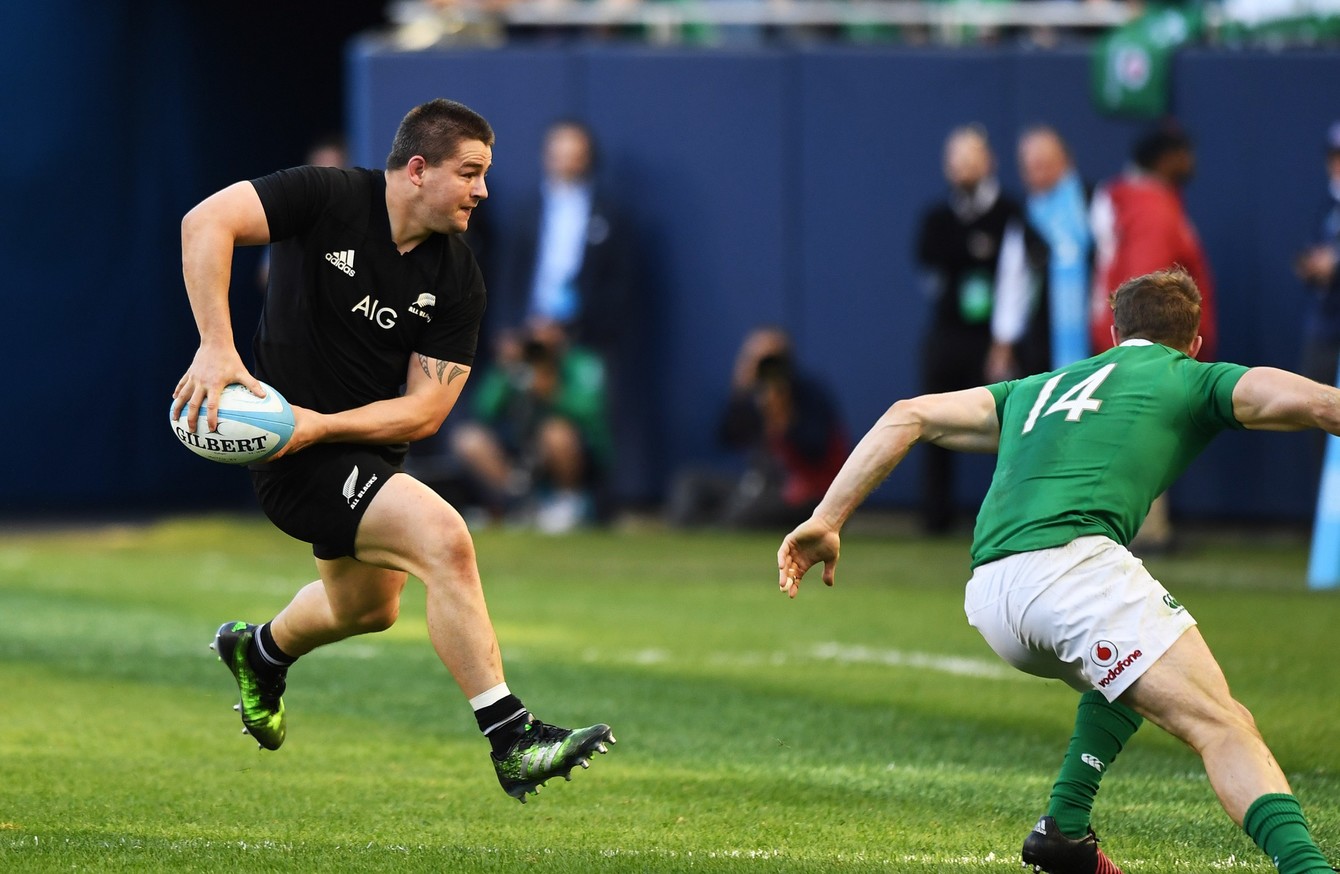 A spicy one, to set the tone.

I love designing phase play schemes off the lineout, I love putting maul builds together, I love designing jump patterns – it’s just fun to me. When I’m looking for inspiration (i.e outright theft) the Mitre10 Cup in New Zealand is always a great resource for imaginative plays and if you watch enough of it, you’ll see the different schemes that so many top coaches in the Northern Hemisphere have taken from the same competition.

Joe Schmidt, when asked about the short-side switch that put Jacob Stockdale away for his try against the All Blacks cited the Mitre10 Cup and Super Rugby as being a huge source of inspiration for him on that scheme and others.

“I’m always on the look-out. I watch the Mitre 10 Cup and they’ve always got a couple of good ones. There was a great one recently that the Highlanders used and I said to the coaches, ‘Maybe we can do this’.”

And why wouldn’t he? Watching Mitre10 Cup on New Zealand TV shows so many imaginative and unique lineout plays that often create real linebreaks and try-scoring opportunities. They are well worth stealing. Uh, I mean, taking inspiration from.

My current fascination is in creating the gold standard – the first phase line break – but these are really hard to generate. When constructing lineout plays, it’s a mistake to assume that the jump and catch are only a means of getting the ball from the 15m channel to the midfield where all the fancy stuff happens. The lineout itself is often the best place to create the linebreak.

So, over the course of this series, I’ll help you fill out your lineout playbook with some schemes that you can add to your school team, your club or whatever.

Four-man lineouts are a favourite of mine because of the options they give you in midfield. In that regard, expect to see an awful lot more of them because when it comes to manipulating opposition defences there are few schemes better.

Let’s get into it.

When and Where To Use

Four-man lineouts allow you to stack the midfield with ball carrying threats and almost “pre-build” a series of screens and carrying pods from a standing start, which is a relative rarity. In this scheme, my ball handlers are the #15 and the #10 with two big carrying midfielders alongside my entire back-row and my blindside wing hiding behind the scrumhalf as we set up. 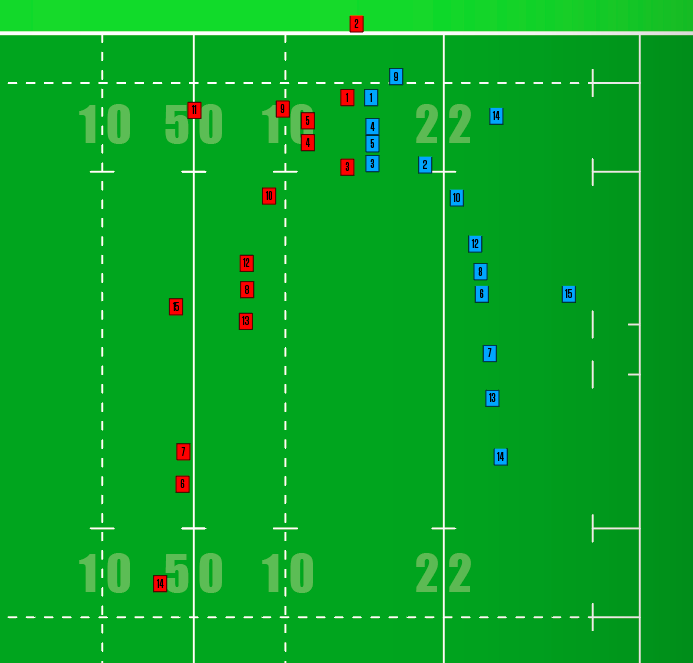 You want to align all of your best ball carriers off the #10 and screen your second playmaker behind them. I like to put my remaining forwards in a second pod aligning off the #15 with your right-winger holding width just outside the 15m line.

These are the areas we want to influence with our first look. 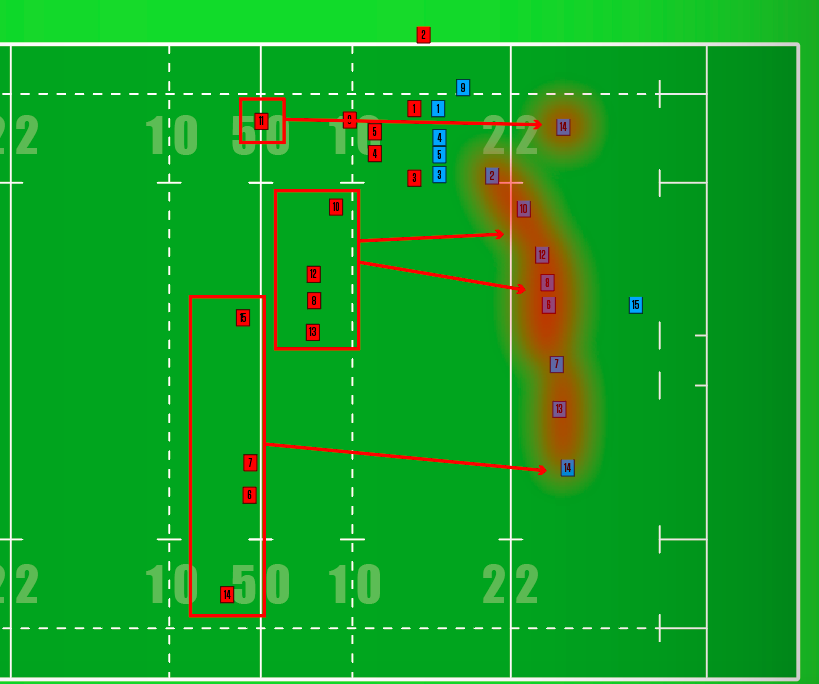 I’ll come back to this in a minute, but we’ll go to the lineout itself which is quite simple. The loosehead will mark the hooker with “banana 1” as the call for this.

Red #4 and #5 are late arriving to the lineout so we get an idea of where the opposition are lining up. This is a five-count throwing sequence that begins when the two locks start to walk towards the lineout. When the hooker sees this, they will start to count in seconds with the idea being that they throw at the end of “five”. All of the other forwards will sync up to this count as best as possible.

(Tom note: I’ve found that literally thinking “one second, two second, three second” is the best way to get an accurate read on the count for these no-call lineouts. When you’re drilling this call, you should have the players counting as they go to get the cadence right.)

When the two locks reach the line, the sprint to the front of the lineout with #4 and #1 lifting #5 on the count of “five-second”.

It’s important that #1 is facing the hooker when the walk-up starts (he should make an effort to look like he’s ready to turn so his opposite prop and scrumhalf get a read on him) and turns on the count of “three-second” as #5 and #4 advance towards the front for the launch.

The hooker will throw a quick dart ball to Two Position.

At the top of the jump, #5 throws the ball down to #9 who will advance at pace. Now we can get to the outside movements. 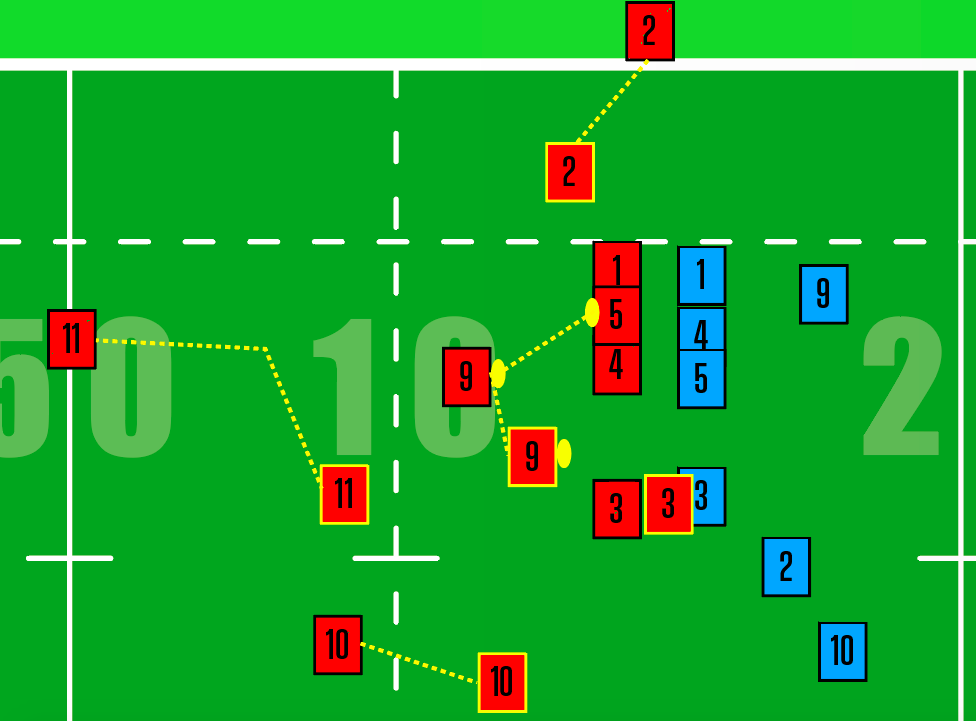 If we look outside we want to see this picture. 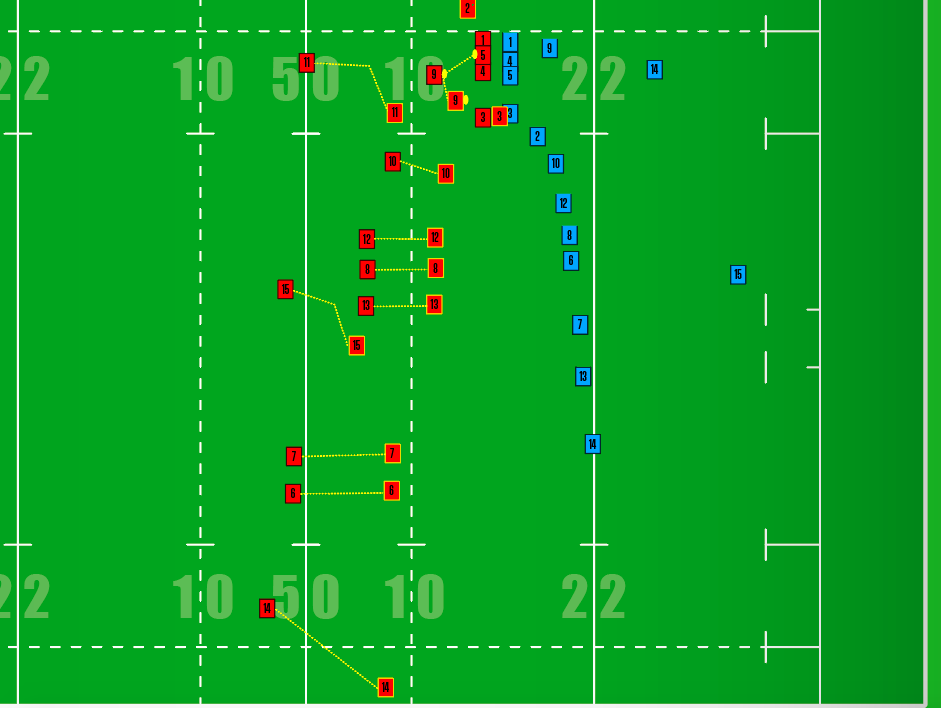 We want our midfield pod of three moving aggressively with the #10 animating for the ball. This is where our #9 can make a decision. The idea here is that we always try to score a try with every lineout outside of our 22 so if he sees space inside our #3, go for it.

For me, if there’s nothing obvious on I’d want a big crash ball carry from our midfield pod with a quick recycle to hit the #15 with #7/#6/#14 on the next phase. We want the opposition to focus on where we drew them on this occasion.

We want to get the opposition (on-field and behind the laptops) primarily focusing on our #11’s route when they have time to think about it.

We want them focusing on the details we’ve gone to great pains to show them;

If this leads to a try, great. If not, we keep it for later in the game in the second half. Why? We want the opposition coaches and analysts to pay attention to the unusual actions they saw on this scheme and the individual components we’ve highlighted above.

To add a little bit more to this, if you don’t score a try on this set-piece try to have your #10 remonstrate with #11 on the next break in play in such a way that the opposition notices it. “Cut harder”, “Get to the space quicker”, etc.

We want the detail-orientated people in the opposition to notice the small details we’re leaving for them.

“They really like the #11 for that four-man lineout” is the concept we’re trying to sell here.

Now for the Banana Split.

If the opportunity arises in the second half to have a lineout in a similar position, lineup exactly the same pre-throw. This is the second part of our Two Look Lineout scheme where we have keyed the opposition to expect one thing but deliver something different.

The loosehead will mark the hooker with “banana 2” to differentiate the call. This call is quite different, so the hooker must be completely sure of the call before we start.

This time, when the locks walk into the line, they will run to the tail of the lineout with #3 as the lifter. Everything should look like a launch – #3 in a deep lifting position, #4 gesturing to the hooker while shuttling back, #5 hunching with him as if he’s on a lifting route. This is a slow launch throw and the opposition will fancy getting a hand to it. 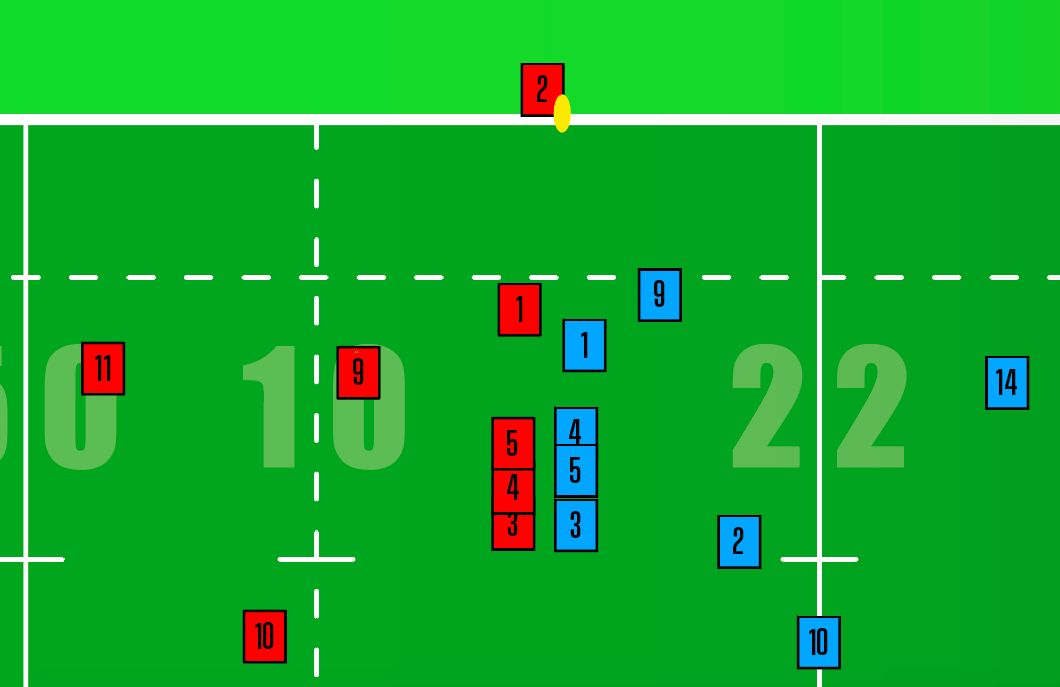 This time we want the hooker throwing the ball short to Red #1 on the count of “four-second” while the launch pod is about to jump at the tail. Red #11 will run the same route as before with the other players outside #10 moving as if ready to carry. We expect this will key Blue #14 to step a few paces to his left. 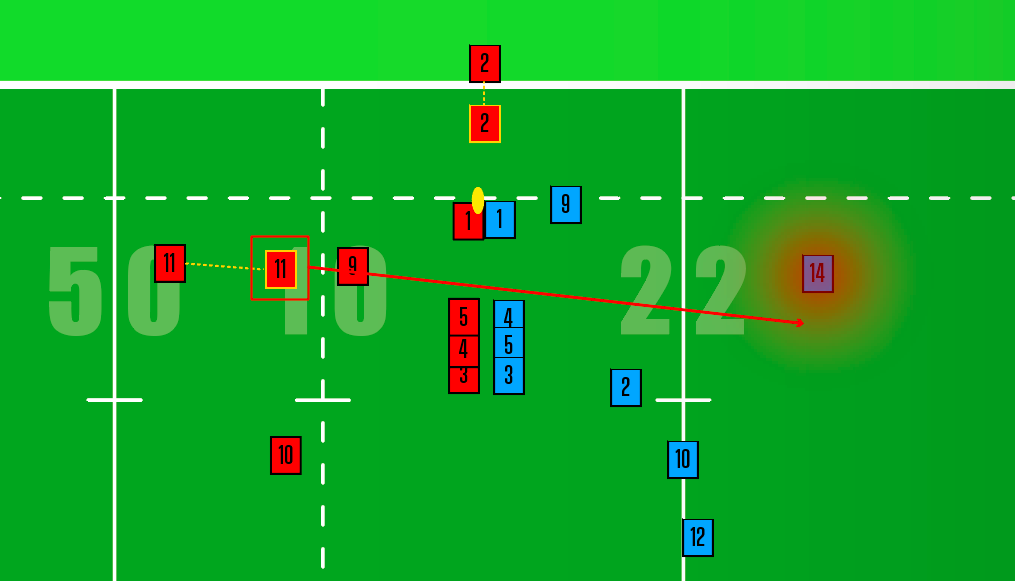 When the ball goes to Red #1, Blue #1’s natural reaction will be to try to tackle him. Ideally, he’d be doing this after moving towards the tail in support of where he thinks the break is going. Our hooker will step off the line to interest the opposition #9 and get him to stay on the 5m or move towards our #1 expecting a 1-2 pass with the hooker.

#11’s route and cut will disguise what we really want on this play; for #1 to swivel and pop the ball to #9 on the burst through the gap in the lineout. 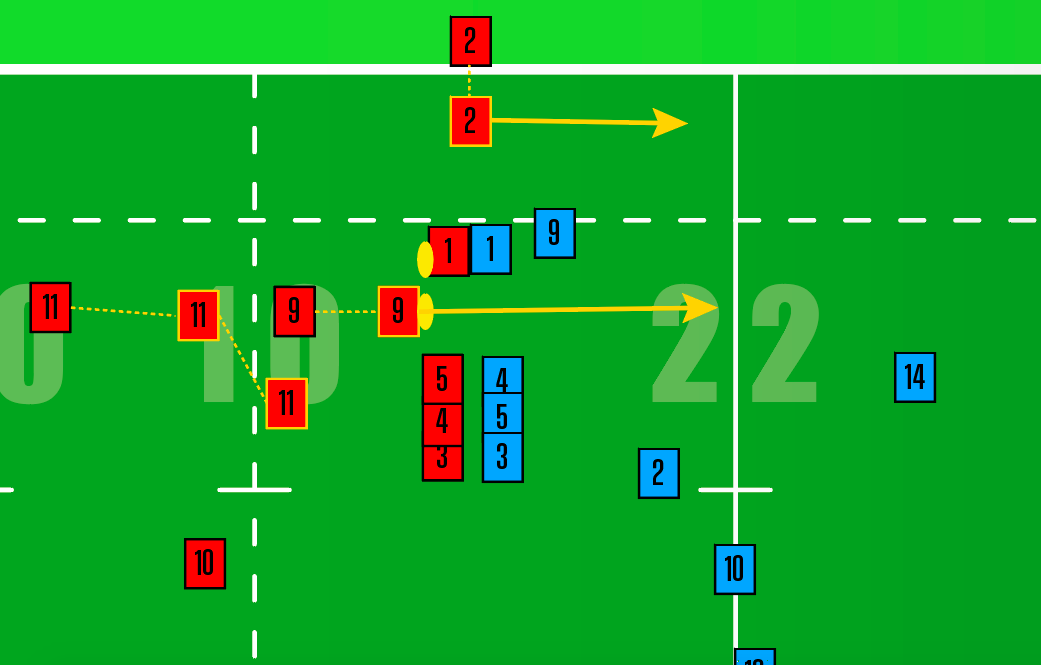 Our previous lineout will key the opponent into guarding the break by #11 at the tail and that will give us the few paces of lateral space we need to make this break. Your #9 will want to be very quick and an elusive runner. They will have #2 running a support line along the touchline if Blue #14 doesn’t step off his line but if you have a #9 who’s a good stepper, then they’ll have the space to make a play one on one with only the covering #15 to look out for as they head towards the line.

This is the Banana Split.