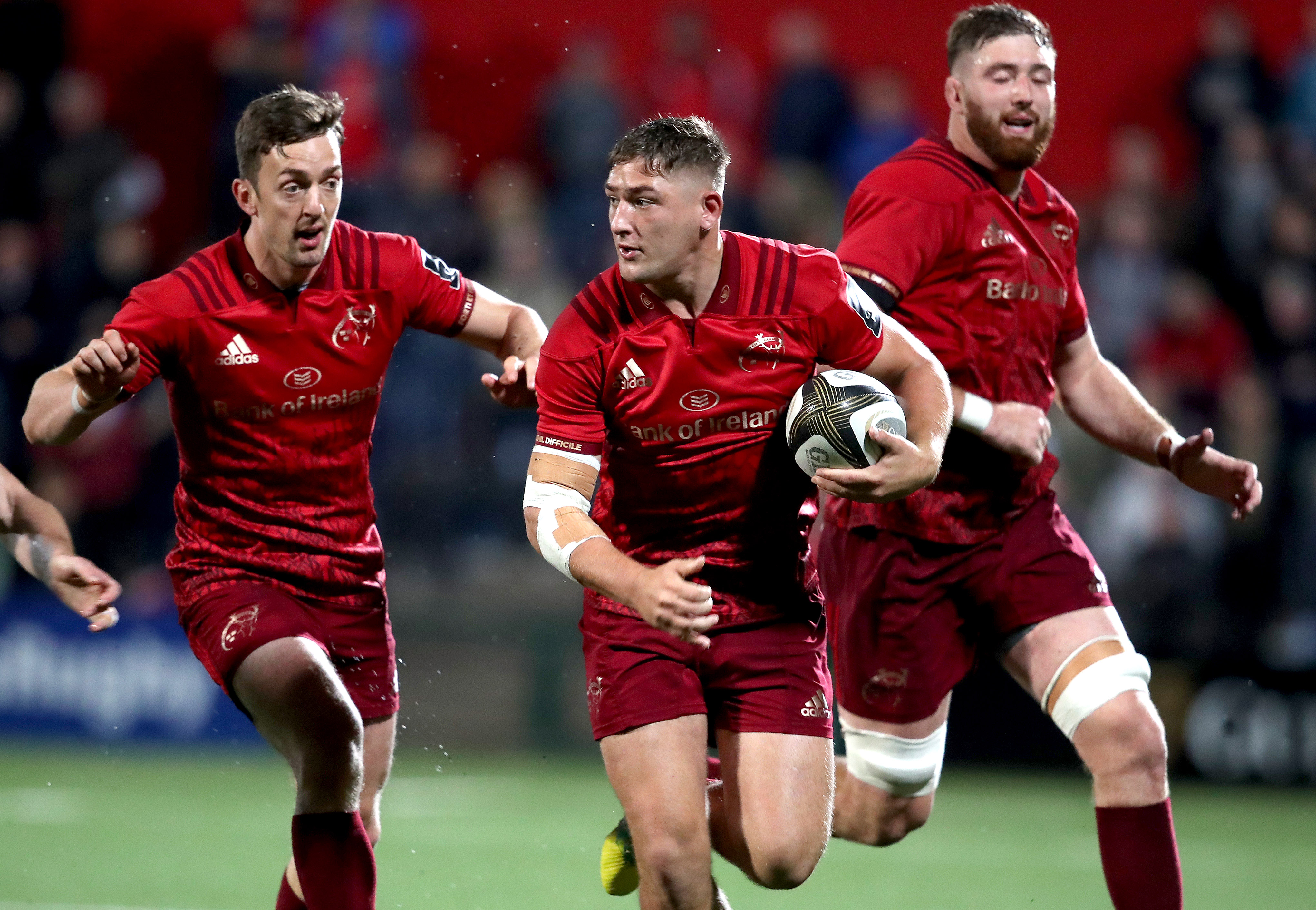 Flat to the Transition

I’ve been banging on about attack in transition a lot over the last few months.

If you talk to any coach about it, they’ll tell you the same thing; that hitting teams in transition (or on turnover ball) is the best type of ball to attack with if you want to make a lot of ground quickly. When you catch teams transitioning from an attacking shape into a defensive one, you can catch favourable alignments, a tonne of space and usable momentum. Get a good enough transition with well-executed running lines, handling and decision making and you’ll score a try more often than not – so creating the circumstances where you can force a transition, rather than waiting for the opposition to give you one, is a skill that is in a lot of demand in 2018.

Let’s have a look at this scenario.

Blue team have hit on the far touchline through their blindside winger, secured the ball, and are now going to try an expansive little move to hit the ball up in the middle of the field through their #8. 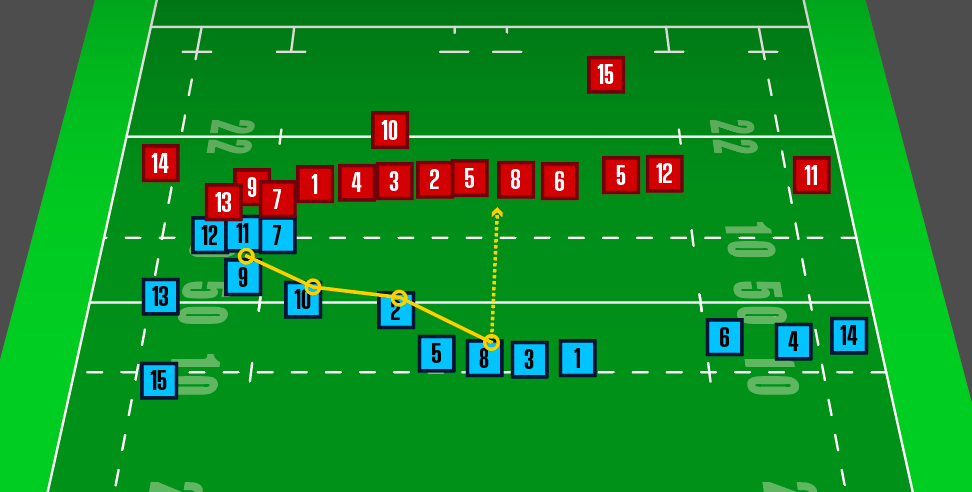 Once #8 hits that up, blue team will have playable options on either side of the field once they retain possession as, with three supporting forwards, they surely will bar a handling error.

But what happens if they get turned over at the ruck by red?

Now their good attacking scenario is an extremely vulnerable defensive one. With a small bit of width – 9 > 4 > 10 – red team have a look at elusive runners attacking heavy forwards in space with no cover and supporting forwards of their own to work with.

This is an attack in transition.

Unlike a kick transition, where you have two or three runners attacking space where the opposition are running to, a breakdown transition like this gives you immediate access to great angles of attack, bad opposition alignments (heavy forwards in open space) and no covering defenders. If you have the hands – and intention – to go for it, there’s no better way to attack as long as you have the personnel to play that way.

Last season, we had two elite jackals in our starting XV when it came to A1 games – Peter O’Mahony and James Cronin. We had other guys who were more than solid on the floor, like Stander, but aside from bringing in a very inexperienced Conor Oliver, that was it. Our main jackaling weapon – Chris Cloete – was injured in February and out for the season as a result. This affected a lot of the way that we wanted to play in defence and, as a result, on breakdown transition. We just didn’t generate enough opportunities to be effective.

We played a lot on kick transition – and will continue to do so – but the addition of Tadhg Beirne and the return to fitness of Chris Cloete add the powerful practical and psychological weapon of breakdown transitions to Munster’s attacking work.

Let’s have a look at a few examples;

This is a long one, but it shows some key aspects of what I’m talking about.

When Beard breaks for the Ospreys off the maul, look at what he’s running into. 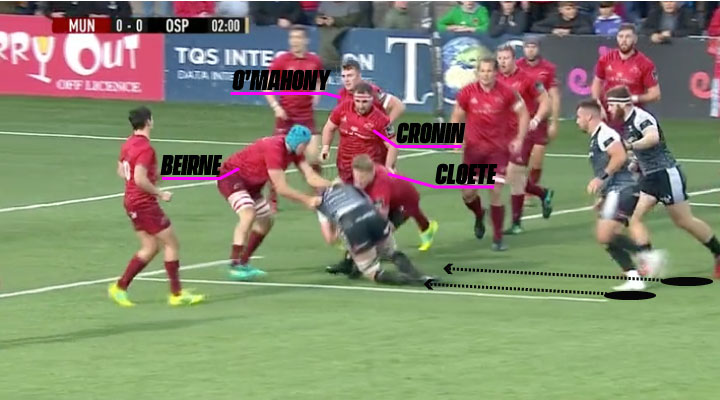 Cloete is attacking the ball, Beirne is in position to get his hands on the ball once he hits the deck while Cronin and O’Mahony come around the corner. There are two Ospreys forwards looking to come in as ruck support but they’re already under the pump to get to this one in time.

As soon as Cloete makes the rip, Cronin feeds O’Mahony, who sends the ball wide to Goggin. When Goggin takes the ball, the Ospreys are already in a bit of defensive strife, even on Munster’s 5m line. 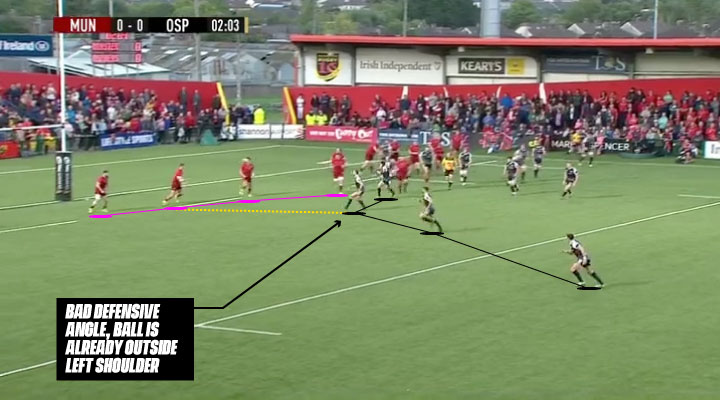 Because of the transition so close to the gain line, Allen has already given up an outside shoulder angle to Goggin while having most of the field left to defend. That was a good attacking position for Allen but a terrible defensive one, and Munster’s quick hands have now opened up the entire pitch for a counter attack.

Goggin kicks the ball into space on this occasion – not the worst option, given Ospreys alignment – but we had other possible options too. 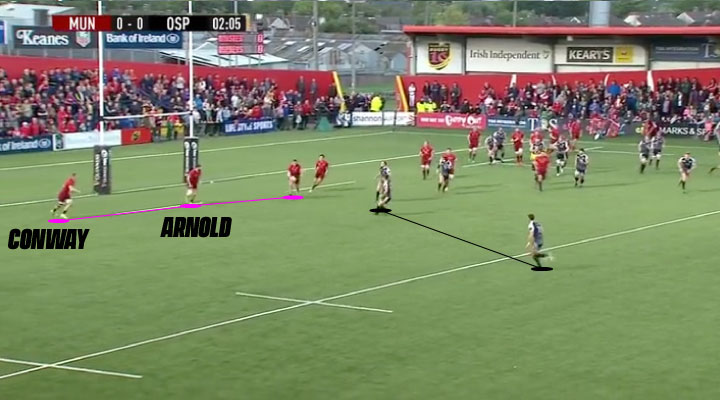 Arnold’s angle on Allen probably puts him clear onto Hook, where he can give Conway a one on one with Morgan for the line. It’s high risk, for sure, but we scored one in broadly similar circumstances last season.

Either way, Goggin’s kick couldn’t really go wrong and it moved the defensive line back into their half. When our defensive line reset – aided by good work on the floor by Conway and Arnold – look at the picture for the Ospreys. 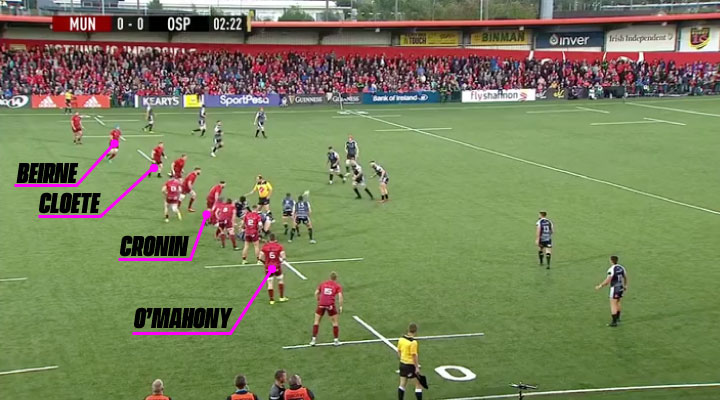 Beirne and Cloete standing at C/D on the openside, Cronin standing by the fringe and O’Mahony patrolling the blindside. They would kick the ball back to Munster after they just managed to recycle this ensuing ruck and this exact alignment would work provide something even better later in the half.

Munster’s threat on ruck ball forced 22 kicks out of the Ospreys, despite them having less than 39% possession over the entire game.

It’s important to realise that breakdown transitions are, in some ways, less susceptible to time delays than kick transitions. When you’re running back a kick turnover, beating the opponents reset is particularly important because they can isolate you in the tackle if you don’t isolate them with your running.

Once you turnover a ruck, the opponents’ alignment is pretty much frozen in place until you play the ball from the ruck.

Let’s have a look at an example;

After Cloete steals the ball from the ruck, he feeds Botha and then cycles away to the tramline to act as a wide attacker. I’d like this ruck to move a little quicker from a Munster POV but Williams was covering the backfield after the Ospreys lineout and Archer was probably correct to lock this one up rather than risk a pass.

Look at what happens after the ball goes back to our stacked short side.

Only a forward pass right at the end prevents Cloete from going away down the touchline for a serious linebreak.

Look at the picture Beirne had off Carbery’s pass – two front row forwards and a flanker covered by a scrumhalf, exactly the same picture that was there after the initial turnover. 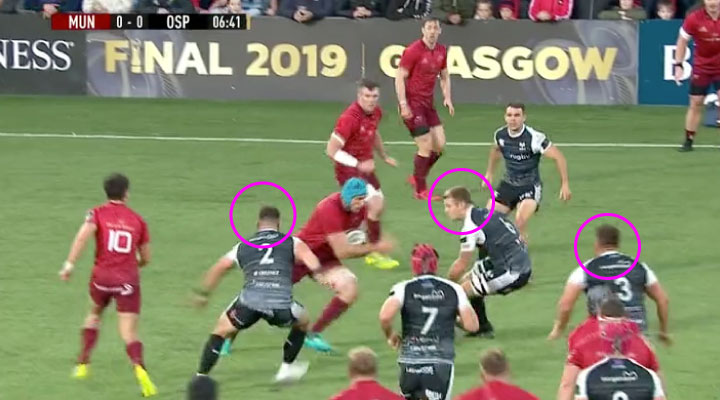 A guy like Beirne has the athleticism, confidence and handling ability to make this kind of break work for Munster, and who better in support than O’Mahony and Cloete?

The breakdown transition locked the hooker, tighthead and blindside flanker into a dangerous amount of defendable space on the short side. With the likes of Carbery, Beirne, O’Mahony, Cloete and others, we have the personnel to create these transition events and then exploit them. Up the speed of the initial ruck recycle in this instance, and you’re looking a more favourable outcome from a Munster POV.

If your defensive breakdown work is effective enough, you can actively condition the opposition into giving you the kind of ball you want just by the way you align in defence. The Ospreys like to play with width through Davies but if you can make any wide ruck a threat, you can force them to kickaway ball through the need to exit or “escape” the suffocating dread of your jackals.

Let’s go back and watch Joey Carbery’s try on a kick transition straight from the restart;

Give this kind of ball to Carbery and he’ll slice you up. He made this look easy but it was anything but. His double hand grip on the ball right before he beat the first man sold the pass option to Sweetnam enough to sit down both defenders and give Carbery the space he needed to slide through the gap with Cloete shepherding him all the way.

But how did he get that kick away from Davies in the first place? Let’s go back a little further.

Davies goes for a low percentage kick over the top rather than risk the hit up through Baldwin. Why? He wanted to get Morgan – the pacey sevens specialist playing on the wing for the Ospreys – running onto a kick beyond Munster’s defensive line. Why not risk the hit up and recycle? 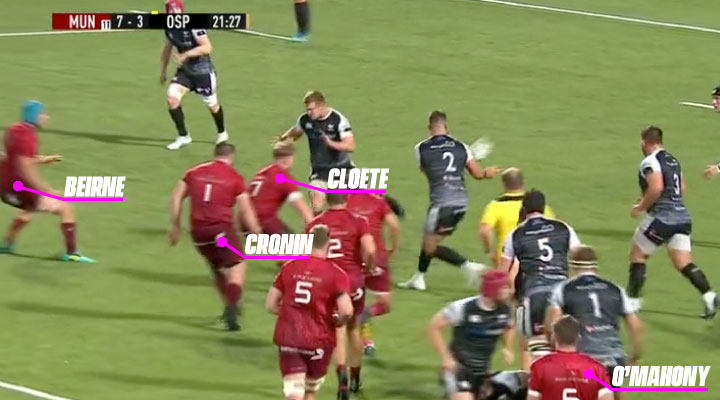 Beirne and Cloete at C/D, Cronin coming hard off the inside, with O’Mahony guarding the blindside.

With four jackals in the starting pack, Munster have the capability to actively manipulate the opposition’s behaviour with the ball in hand.

Against the likes of Exeter, Castres, Gloucester and even Leinster, that ability to threaten ruck possession all through the defensive line will be a valuable asset.