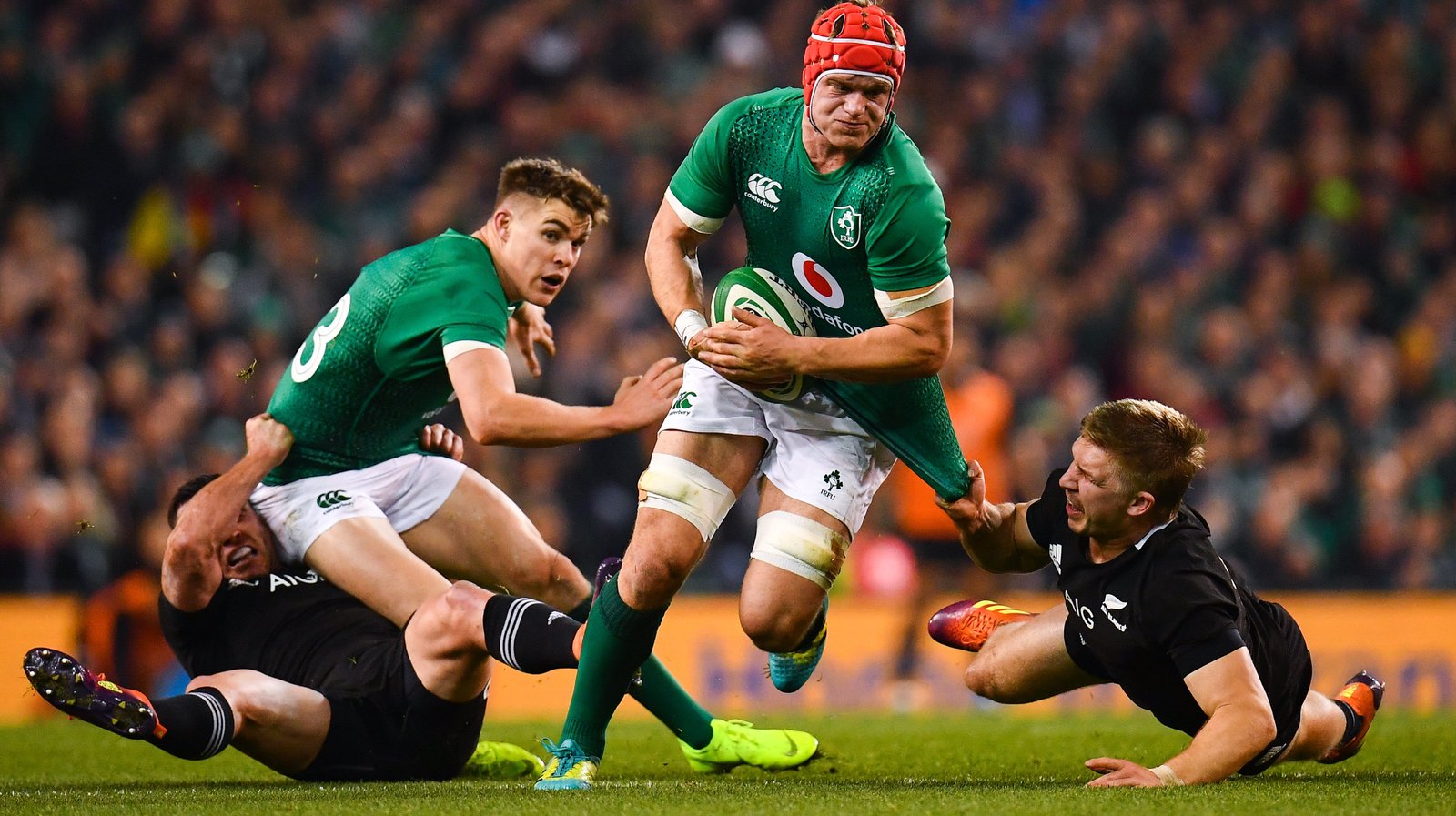 Five Minutes From The Seven

Josh Van Der Flier wasn’t going to take a backwards step against the All Blacks on Saturday.

That shouldn’t be a surprise, of course. He’s a class operator that would probably start at #7 for most other elite countries in World Rugby and the vast majority of clubs in the Heineken Cup. Let’s also not forget that he came on against the All Blacks in Chicago and had an absolute belter too so when it comes to Josh Van Der Flier, nothing should surprise us. He, like all of the Irish starting pack in this game, played out of his skin and everything good about his performance on both sides of the ball could be seen in the frenetic, intense opening five minutes of last Saturday’s heavyweight showdown in the Aviva.

Let’s have a look at how it went down.

When we look at any openside at the top end of the test game, you can’t judge them by big turnover steals on the ground. Too many people see “7” (or “6” if you’re South African) on the back and assume that the player in question isn’t performing just because they haven’t won two or three straight arm penalties at the breakdown. Not all opensides have the same role, even in the same team. Wales, for example, used Sam Warburton and Justin Tipuric – both opensides – in very different openside roles to a lot of success and Ireland use all three front-line opensides (Van Der Flier, Leavy and O’Brien) in a very similar way. I went into the differences in this article here, which is a good background to this article so far as ball carrying and defensive roles go.

Schmidt went for Leavy from the start against the All Blacks and if we discard the possibility of any selection jiggery–pokery from Schmidt, we can presume it’s because he wanted five heavy ball carriers with the necessity for Toner to start after the lineout malfunctions in calling and execution against Argentina. That meant Leavy starting and Van Der Flier finishing.

When Leavy was forced to withdraw due to a neck injury, that brought in Van Der Flier (with Murphy on the bench) and with it, a change in Ireland’s structure and ball carrying rotation. We can see who carried what in Ireland’s system by looking at the ball carrying stats. Stander carried the most with 22, Ryan followed with 17, then Furlong with 12 and the rest was made up by O’Mahony (9), Van Der Flier (8), Healy (7), Best (6) and Toner (3).

In Van Der Flier’s case, almost all of his ball carrying happened in the seam between the Strike and Run Zones, as I’ve defined for shorthand use in the graphic below on a typical openside play.

He was often used as a wide attacker on shortened lineout plays – like the below – and was used in exactly the area of the field where he would be most effective by Schmidt, as you’d expect. His speed, and timing onto the ball were perfectly suited for stretching the All Blacks edge defence on these kinds of set plays and on phase possession.

But it was his defensive work that was most apparent in the opening exchanges here.

It’s not too reductive a statement to conclude that an openside like Van Der Flier is judged on how long he can stay active on both sides of the ball. In attack, you want him staying alive on the play up until he has to link the play, hit the gain line with possession or secure a ruck. In defence, it’s defined by only making tackles you need to make and extracting every second you can from the opposition’s recycle while looking for an opportune time to jackal.

This was Van Der Flier’s role in the opening defensive set. Most of the time, a good openside playing Van Der Flier’s “lighter” openside role – as opposed to the heavy role played by O’Brien and Leavy – is defined by their positioning in the wider areas of the field, their patience and their timing.

Let’s have a look at his very first actions.

Ireland took the New Zealand kick off and immediately set up to box kick possession back closer to the New Zealand half of the field. Look at Van Der Flier (red scrum cap, obviously) as he chases the kick right next to the exit point and contests on the second bounce before realigning to “C” after Marmion enters the defensive line post kick.

This is Ireland’s defensive system realigning as best as it can on a potential kick transition with the most mobile flankers taking up positions at the edges of the Irish line.

Van Der Flier takes the short side and O’Mahony realigns further out on the openside line just inside Ringrose and Aki, but outside Sexton and Toner.

Healy is a slight deviation in the system here in that he’s outside Van Der Flier and defending touchline space, but it’s the kind of thing that can happen after a bouncing ball kick chase.

This is where Van Der Flier does most of his work, especially against a side like the All Blacks. Watch his defensive action as the “D” defender when Smith tries to get direct width off this ruck.

Van Der Flier doesn’t sit down on the attacking line, stays alive on the feet so Healy can’t get isolated and attacked at the edge by a pop to McKenzie, who drifts into the picture at 00:39. Van Der Flier has to ensure that he takes the contact here because if the carrier hits Healy, it would create a dangerous fold point for the Irish defence in the wide channel – something the All Blacks are skilled at exploiting.

Look at the defensive reset those small actions allow. 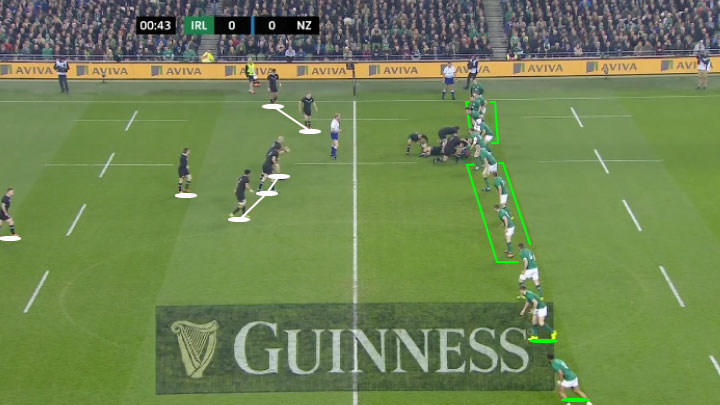 That’s a formidable defensive line. New Zealand would carry the ball up through that three-man pod to a very small gain and kick the ball away on the next phase.

Once Ireland took that kick, we transitioned into a few attacking phases. Van Der Flier was right where you’d expect him to be – in the second phase pod aligned right in the Strike Zone.

When it becomes clear that Ireland aren’t going to go through the phases, we look to exit beyond halfway. Van Der Flier’s role on these box kicks isn’t as a wider line setter, it’s as a close range chaser, just like he did on the first box kick. You can see Sexton informing Van Der Flier of the play as he walks past. Van Der Flier leaves the pod to take up a chase position behind Marmion.

When he runs after the kick he doesn’t chase the ball, he runs to put pressure on where the ball might go a phase later regardless of who takes it. If the ball spills and gets claimed by Stockdale, he’s a pass option. If the All Blacks take it clean, he’s in position to hit the runner as he comes across. If the All Blacks take the ball but Ireland get hands-on the ball carrier and create a ruck situation, he’s in prime position to defend the line from “C”. 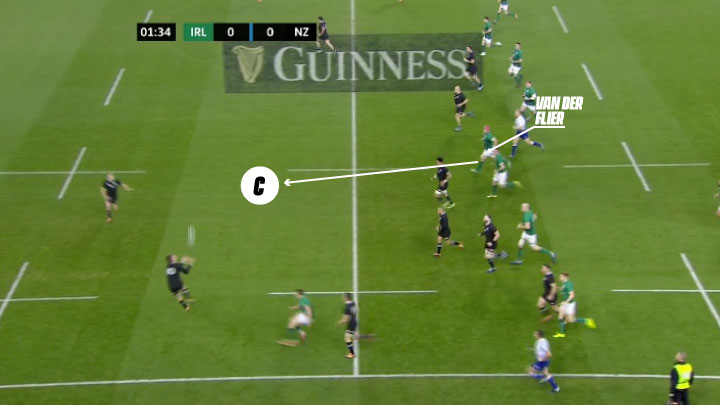 Once the ruck resets, Van Der Flier is there to make an excellent shot on Whitelock that keeps the pressure on New Zealand in their half of the field.

Notice how he swings to the All Black side of the tackle, and how that gives O’Mahony a look at a potential jackal? That draws four All Blacks to the ruck – Ireland lost only two – so, once again, the All Blacks are forced to kick the ball away in the face of Ireland’s defensive reset because they have no options. 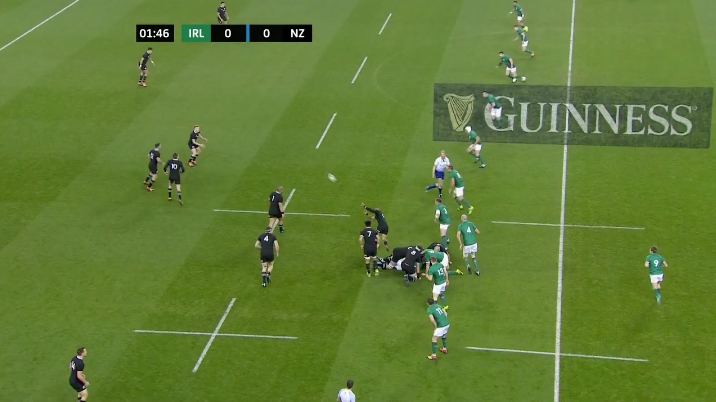 Less than two minutes in and Ireland already have two big wins on phase defence.

This kick worked out much better for the All Blacks as Barrett was able to probe a shallow kick to the corners behind Earls but just in front of Kearney that he had to slide into touch with it. This was a superb attacking position for the All Blacks and a good way for them to get a bit of front foot possession after losing the last two phase battles.

The resulting lineout would see Van Der Flier at the tail of the Irish defensive line. His positioning here is exactly where he needed to be to cover all breakaway options off the lineout.

New Zealand went for a maul feint and two-man breakaway – something highlighted before the game on these pages – but Ireland were ready for it. Healy stayed lovely and active in the pocket alongside the maul while Van Der Flier tracked the line of his opposite number, Ardie Savea.

When the pass came to Crotty, Van Der Flier was able to get his hands on again, stick the tackle and get a second look at disrupting the ball straight afterwards with a great bit of quick thinking once the ball squirted out behind Smith.

Van Der Flier got to his feet and returned to the kind of position you’d want from your openside in this kind of 5m scenario – close to the point of the ruck without stepping on it.

He had a look at making a jackal attempt a few seconds later but had the brains to release that he wasn’t going to make it. What did he do?

He stepped off and back into the defensive line rather than risk getting taken out of the next phase. This kind of decision making is vital for the openside.

As the All Blacks began to move infield towards the posts with their carries, Van Der Flier would need to man the other end of the defensive line. You can see him tracking behind in the second layer here;

He puts pressure on Goodhue in Phase 6 and makes a good double tackle with Healy on Phase 7 – again, look at how his work after the contact on Phase 7 draws two All Black cleaners off their feet for the phase after.

New Zealand went wider still on the following phase but got stopped up well by the Irish defence with Bundee Aki making an excellent spoil on their last wide ruck. Van Der Flier, as one of Ireland’s wide defenders, would automatically return to the “C” position off this wide ruck.

He’d immediately have to make another tackle. Watch how he refuses to get taken out of the next phase by untangling himself from the attempts of Black #1 to bind him to the ruck. He’s able to pillar up at the next ruck as a result.

When Smith hits Read – who had to reset late behind the Goodhue ruck – he gets nailed by Ryan, who drives him into the lurking Van Der Flier and Stander. Ryan’s sweeping tackle behind Read stalls Whitelock’s support line and Stander and Van Der Flier can brace each other to win a crucial turnover under their own posts.

Stander’s position prevents Tuinukuafe from clearing Van Der Flier and Van Der Flier’s positioning and hands on the ball allows Stander to pincer the breakdown and paint a dominant picture to the referee.

Van Der Flier’s work rate, intelligence, physicality and openside instincts on phase play were a crucial part of Ireland’s defence in the opening five minutes and throughout the game.

In the battle for Ireland’s #7 shirt in Japan, Van Der Flier just made a defining statement against the World Champions.