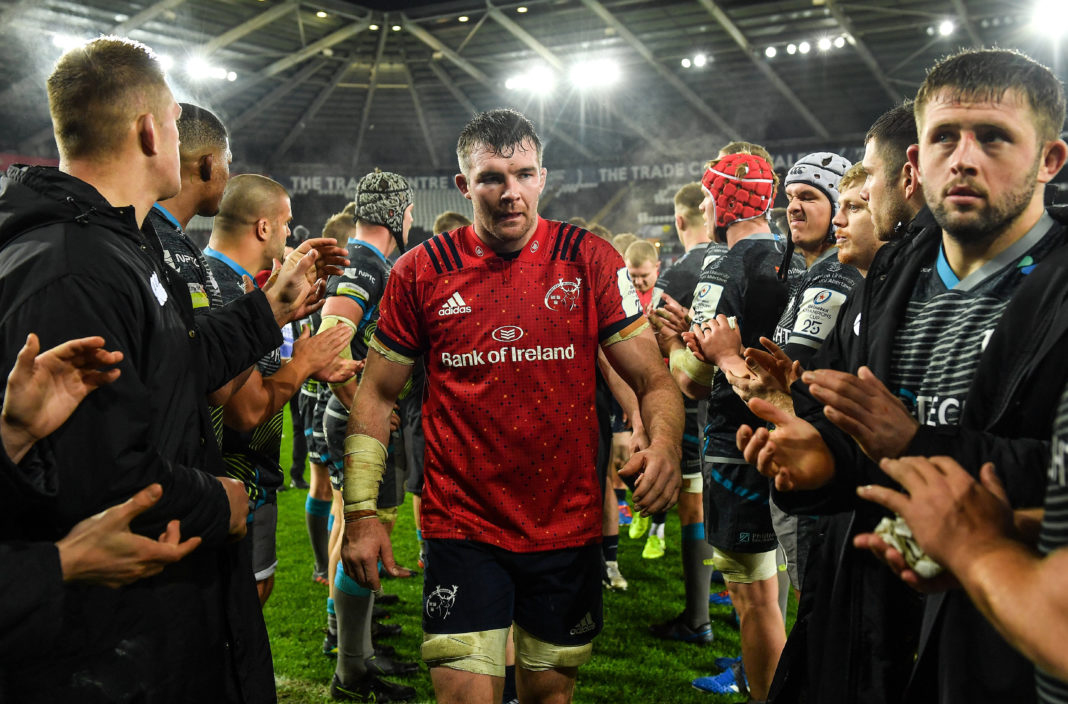 16 November 2019; Peter OíMahony of Munster leads his side from the field following their victory during the Heineken Champions Cup Pool 4 Round 1 match between Ospreys and Munster at Liberty Stadium in Swansea, Wales. Photo by Seb Daly/Sportsfile

“Don’t get too wrapped up in shape,” the coach said. “It’s a means to an end, not a means in and of itself.”

There’s a real temptation to get overly wrapped up in 2-4-2s, 1-3-3-1s and the more contemporary variants but you have to think of any attacking shape as a means to constantly provide attacking options and new pictures to manipulate the defence from ruck to ruck.

If you get too wrapped up on just the shape, rather than the detail players in the shape are using, then you can end up with false positives.

If you look at last season, for example, you’ll see us using broadly similar shapes ruck to ruck that we’re using now.

This is a fairly typical example from last season.

Let’s play it out;

This is a set-up to come across the field and pinch Exeter at the edge but it’s killed by slow ball at the ruck (6 seconds!) and a little bit of confusion once the ball swings beyond Carbery. The big takeaway from this sequence – and a lot of our sequences against big teams last season – was how slow our progression across the field is when we weren’t generating quick ball initially on the first strike off the ruck.

In big games against big, heavy packs our “starter pod” getting shut down often lead to an ever decreasing likelihood of generating a break further out the field.

Maybe we were always going to kick off this phase – after all, it’s a follow on from the previous GIF where we were already losing ground – but the slow ball off #9 guaranteed it.

This year, we’re tweaking a few bits and pieces on what we’re doing.

Here’s an almost identical sequence to the first GIF shown above.

You might think that there’s a big difference between running into the Ospreys and, say, Exeter or Racing, but this is Dan Lydiate – one of the best heavy stoppers going – guarding this starter ruck. The key to generating a positive scenario on this play is fluidity in our next phase structures and communication from the pod around our lead carrier.

First, let’s look at our rough forward shape at the first ruck. 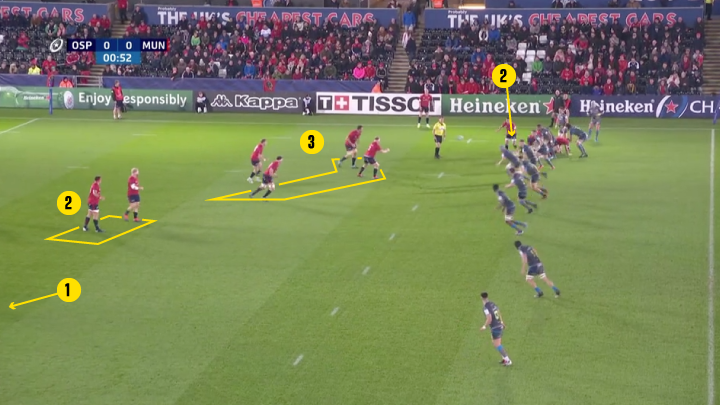 There are two forwards involved in the previous ruck, three forwards playing off #9, two lurking in midfield and one “lone wolf” on the flank. We have used this shape on big openside phases consistently throughout the season and at times during last season.

The key is communication and pace.

The Pod of Three has to be built on effective communication from all of the participants. The back lurking in the pocket has the best view of everything and will be watching out the field to look for workable space that he might exploit – he might call for a pass back if he sees something in the moment.

The two “wings” either side of our lead carrier have to keep their bodies square – maybe even turned slightly inward – to keep the defenders isolated. If they see space, they need to call for it and the lead carrier needs to have the skill set to pass it inside or outside as required.

The width between Holland, Kleyn and Ryan is a good indicator of what we’re trying to do. 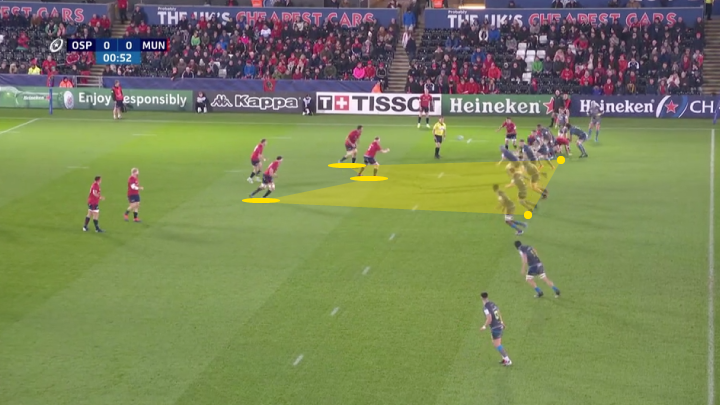 They are projecting a lot of space on the defenders close to the ruck and, with enough work during the game – and, indeed, the season – to sell viable passing options you can create more one on one or one on one defender/one secondary collisions in this area of the field. When you can get those kinds of collisions, you create faster rucks because the opposition can’t flop their heavy defenders all over the ball as you get with slower one on two collisions.

When the ball comes back from this ruck, you can see our Next Phase shape gives us five options to work with; 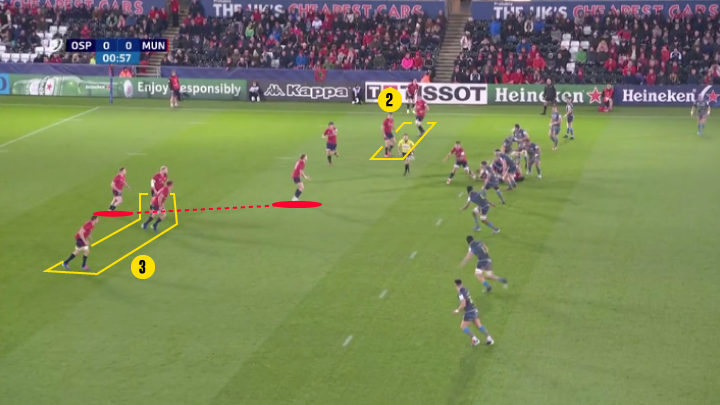 Haley is the link man between the new Pod of Three – the Wide Pod of Two has reset back to the wing – he can either carry the ball himself, link up with Scannell to go wider, or hit any of Loughman, Stander or O’Donnell. There are five options in total. Haley chooses to go himself on this instance but the options for further progression of the ball were all there.

Here’s a look at the same phase progression but with a different option from the link man.

You can see the same fluidic transition between 2-3-2-1 on the big openside phase that then reverts to a Pod of Three off the link man.

The greater the pace on the ball from the original pod of three – and there could even be a break here going on what we’ve seen earlier in the season – the more the pace and breaking ability of the link man plays into our ability to hurt teams on this second phase.

When the ball comes back on this phase – with a penalty advantage – you can see another Pod of Three has formed.

Kleyn tips the ball onto Loughman here as Holland and Scannell reset around the corner to give us another structure to work with on the next phase but the ref blows it up for Lydiate hanging on the wrong side on the back of the previous infringement.

You won’t always have the exact numbers you want in this structure – players get caught in rucks, go down injured, get lost on the structure – but that doesn’t mean you don’t use options.

On the below example, we pass back out of the Pod of Three and go straight to the midfield two without a ruck.

Stander calls for the ball at the edge and is unlucky not to get a clean break after shrugging off the first tackler.

When we choose to keep the Midfield Two and Lone Wolf off the first carry, rather than coalesce into another Pod of Three, you get options like this.

The Midfield Two act as a screen for Farrell before running on to act as an offload option for O’Donnell, who has space to attack off the pass.

It’s not about the forward structure as it stands on a piece of paper, it’s about how these structures morph and transform as the defensive picture changes. These are the Radiating Phase Options that I’ve spoken about before. Multiple phases, multiple fluidic changes, multiple options for every halfback and link man from ruck to ruck.

We’ll need all of these options and more against Racing this weekend.