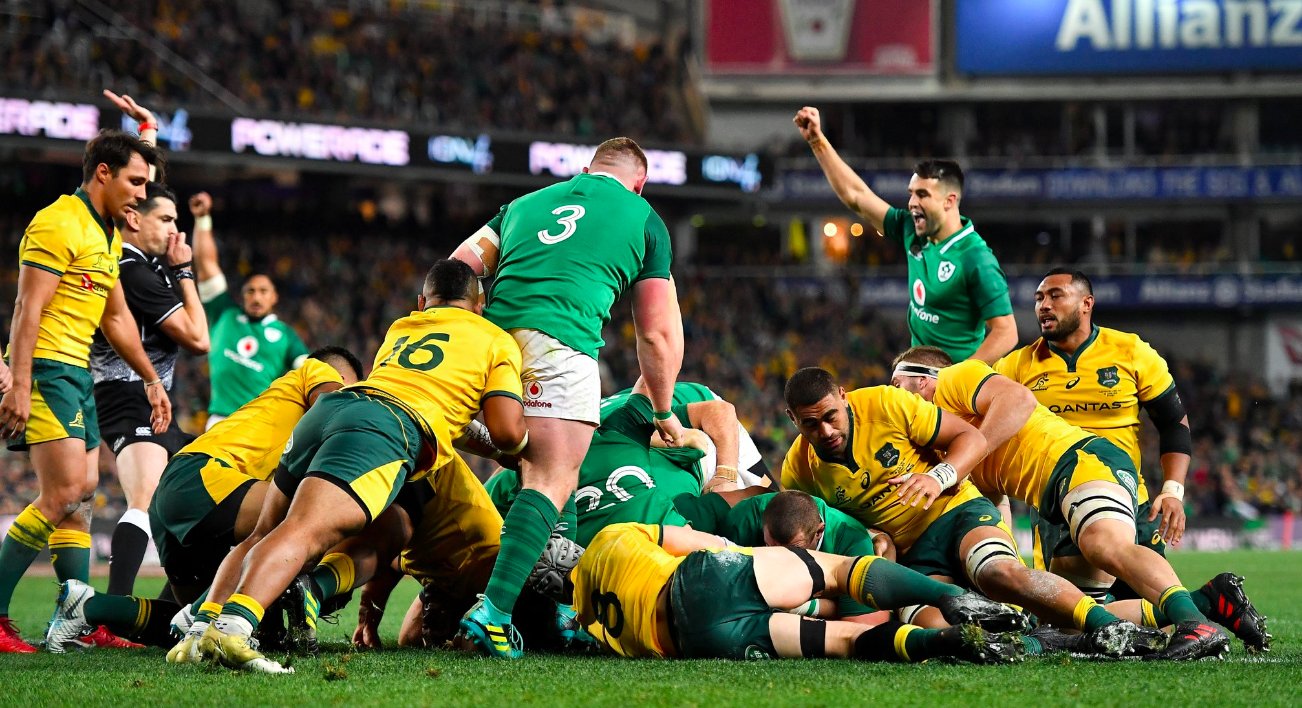 A lot has been made of Ireland’s relative bluntness with possession over the course of the victorious Summer Tour to Australia.

It certainly seems true, just from a cursory re-watch of the games, but is there a statistical difference? We can go some way to assessing this by looking at Ireland’s entries into the 22. Examining a team’s controlled entries into the 22 – a statistic pioneered by Simon Gleave, who is really worth a Twitter follow – is a good metric to examine that team’s ability to convert opportunities into points.

According to Simon Gleave’s Scoreboard Journalism, Ireland managed 3.82 points per 22 entry during their Grand Slam winning Six Nations’ campaign, which was the #1 ranked attack in the competition.

I completed a comprehensive examination of Ireland’s 22 entries against Australia over all three tests and found that we generated 1.5 points per 22 entry, a statistical reduction of 2.32 points per entry. But does that tell the whole story?

Let’s have a look at the detail of our entries. You can sort all the individual columns.

I’ve put an asterisk (*) next to incidences where I feel Ireland might have a few questions for the officials with regards to the decision made.

A few things stick out to me.

The number of Australian penalties given away in the 22 was pretty extreme – 9 in total, which represents 26% of all our possession endpoints in that area of the field. When you count penalties given away outside of the 22, 34 of our total points scored were generated from situations – either from the tee or on penalty lineouts.

We were quite good at turning those lineout situations into points too, and that’s borne out by a 63% conversion rate from lineouts kicked into the Australian 22.

Ireland will point to some of the refereeing decisions – especially in the first test – as a mitigating circumstance in some of the lost 22 possessions.

An “any reason I can’t award the try” question here would have probably lead to an Irish try but “try: yes or no” put the pressure on the TV angles. It was disallowed.

This incident late in the game was decisive too;

Jack McGrath saw yellow for an identical incident (in almost the exact same spot) in the second test and while there’s no way to know what Ireland would have done if we’d kicked this to make it a six-point game, it would certainly make that last minute try we had disallowed a lot more contentious.

There were a few other bits in the other tests but overall the difference in points conversion between this series and the Six Nations is pretty significant.

The first thing that we should acknowledge is that Australia are a particularly bad matchup for Ireland based on the way that we play the game. We play with a lot of phase possession – With Pocock and Hooper, Australia have two heavy jackaling opensides that can realistically challenge on 30/40 rucks per game and while they weren’t always successful, they played a big role in Ireland running on an average of 94.5% ruck completion over the three games while having the lions share of possession on average (55% to 45% over the series).

Ireland’s best day at the ruck was the second test – 95.4% completion rate – and it’s no surprise to see that selection as being closest to what I would describe as our first choice XV from a ball carrying perspective but overall three tests, much of our work with the ball in hand was frontloaded.

Strangely enough, all but two of our 22 entries happened inside 55 minutes, which generally coincides with Australia’s bench transition in the forwards. That doesn’t necessarily mean anything but it would stand to reason that Australia’s 6/2 bench split would impact possession and momentum over the third and fourth quarter. That seemed to play out in the last quarter of the last two tests in particular.

The biggest issue for me during the three games was the quality of the last component to a particular sequence.

Here’s an underrated chance from the first test;

Carbery’s zinger flat pass to Herring creates an opportunity for Henshaw to come around the corner on a 9th phase set play but the pass wasn’t there at the last moment. This was a more low percentage example, but it was a sample of some of the work we did once the phase count racked up.

On this series, Ireland only scored twice (two penalties) when the phase count went over 9 inside the 22. We scored 29 points when we had 5 phases or less in the 22.

What does this mean?

It means that the more phases we used in the 22, the greater the likelihood of a turnover became, especially with Pocock and Hooper on the pitch. Of our eight 22 entries that had 8 phases or higher, 50% were turned over by Hooper or Pocock directly.

When we struck with accuracy off the setpiece, we were way more effective at generating space and point scoring opportunities.

This one ruck special off a lineout in the second test produced massive gains, took Australia’s breakdown threat out of the initial going and created a penalty on the 6th phase.

In the third test, we had the lowest amount of 22 entries of the tour, which stacks up with the first time we lost the possession count (47%) and the ruck count (83) compared to the other two tests. This was probably our poorest day of all three tests and featured a few sub-optimal options on those 8+ phase plays (of which we had 3).

We lost possession twice with this edge play to Sexton/Toner off a close decoy screen featuring O’Mahony and McGrath/ Scannell.

The key part of the final test was the number of penalties that Ireland managed to generate of our 22 entries. 57% of all our entries in this game forced an Australian infringement; two of those lead directly to 6 points and two of them lead to the situation that produced our try in that game.

So has Ireland’s attack degraded since the Six Nations? From a statistical standpoint, you’d have to say that it has but those raw numbers can be misleading.

The Six Nations tally includes three relatively high scoring home games (against Scotland, Italy and Wales) which will have inflated our conversion numbers from that tour. Just based on the last season, I’d rate Australia as being the best side we’ve played. A Wallaby side with Beale, Pocock, Hooper, Foley and Folau in it is a side that will trouble most top tier sides, but especially Ireland. They attacked our phase play and Folau’s aerial ability congested our normal kicking outlet.

There’s no doubting that we could have taken better options in the 22 at times – and I’ll get to that in an article coming this weekend – but I’m not sure if the idea that our attack has gotten “blunt” isn’t more to do with a bad stylistic matchup with the Wallabies and the individual context of each game in this tour.