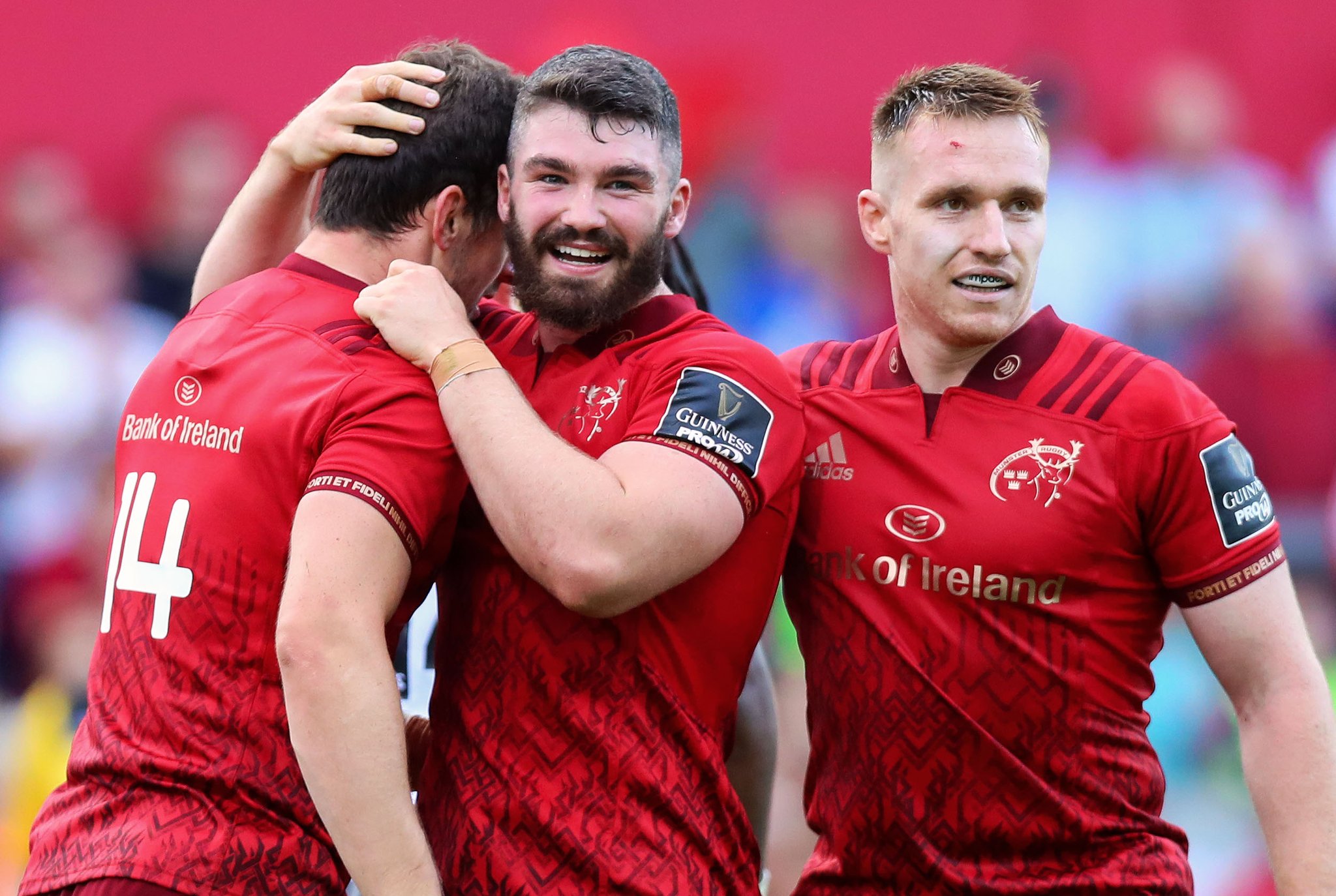 When you consider issues that lead to semi-final defeat at the end of last season, Munster’s attacking fluency, or lack thereof, would probably be chief amongst them.

A lot of that came down to key personnel being absent, of course, and the requisite game plan adjustments that came from those absences, but that didn’t change the need for Munster’s attacking work to evolve beyond where it was. The game at the upper echelons of the Heineken Cup and Guinness PRO14 demands a level of attacking structure and ruthlessness that Munster didn’t quite show often enough last season, so this preseason would be a crucial opportunity to hone our work here. The initial rounds of the new season are as good a place as any to see what Munster have been working on over the preseason.

As I wrote in the Wally Ratings, a 38-0 victory over the Cheetahs doesn’t really indicate that Munster are going to crush all before them this season but there were a few interesting bits that I thought were worth looking at in more detail.

One thing that stood out to me was our use of Billy Holland and others as “heavy pivots” – basically, a forward acting as a first receiver. Having a forward that can operate in this role regularly and accurately, while maintaining their ball carrying threat, can really free up your creative backs to attack disrupted space close to the ruck or widen their angle to threaten the opposition’s edge defence.

The pass back from the second row forward – imagine a Billy Holland or Tadhg Beirne – allows the 10 and 12 to stretch our attacking line and get possession to the edge where Munster have, on the evidence of the weekend, been stacking up to two backrows and supporting back three players.

This is the use of screens and corners that I described earlier in the summer.

Holland makes his presence clear to Cronin and Holland swings a pass around the corner for Hanrahan to attack the disrupted space generated by the screen.

The Cheetahs doubled up on Holland’s line, and that allowed Hanrahan to challenge the “C” defender with Kilcoyne’s frame to run around. 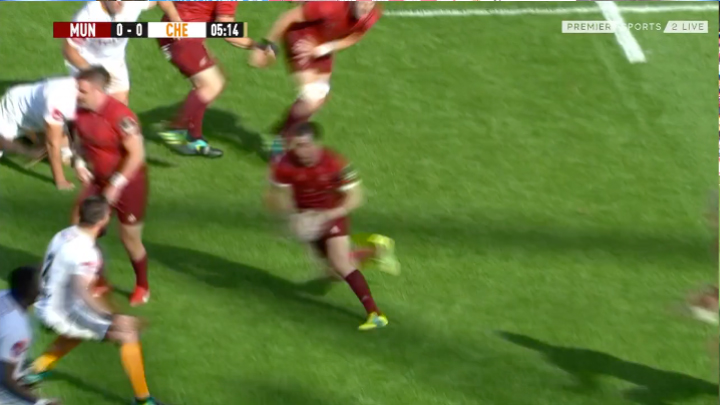 Kleyn, Botha and Kilcoyne locked up Hanrahan at the ruck and that allowed Munster to strike back on the blindside, where we had Sweetnam lined up at first receiver. 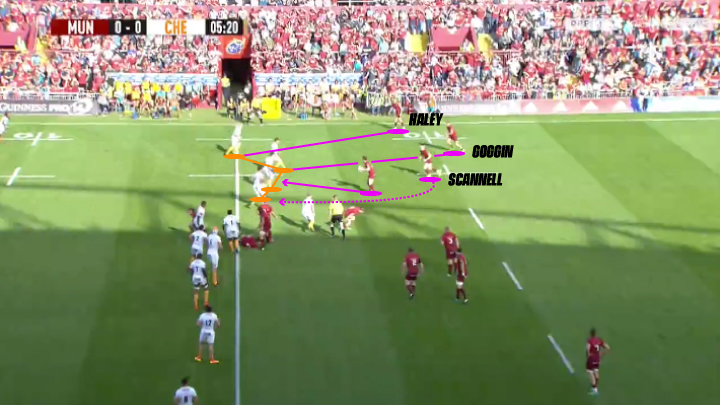 With Haley and Goggin holding the outside edge defenders, that gave Sweetnam the opportunity to attach the inside defenders with Scannell running an unders line. It works beautifully.

Look at the way that Sweetnam’s carry of the ball in two hands sells the outside pass to the second defender;

That gives Sweetnam the gap he needs to target the “C” defender again and get a relatively straightforward across the body offload to Scannell, who’s powering through the space outside the ruck.

Have a look at it in full speed.

Scannell even manages to get the ball off the floor to Cronin to add value to the carry into disrupted defensive space before Goggin and Kilcoyne finish off the job.

On the next phase, we’ve got a structure in place again, with the width being the crucial component – a wide, midfield screen with Scannell tucked behind Botha, Ryan and Sherry. 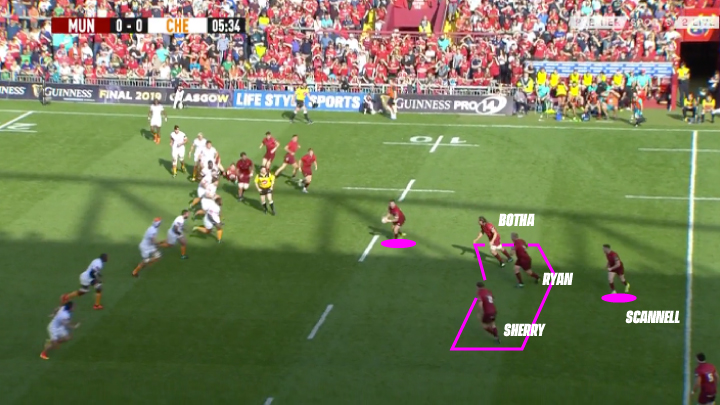 This is a good shape, and the speed of the construction after the break – especially Scannell’s reset after his initial carry – puts us in a good spot. Hanrahan hits Sherry on the outside of the screen for a midfield hit up.

It’s a fairly average carry from Sherry in truth, but he gets the ball back for our next phase of attack with Mike Haley tracking across to keep our tempo up. I received a few messages from people highlighting this as an example of Munster “resorting to one out runners” but show me any top side in the world that doesn’t hit a ball like this every now and then. Some people seem to have an idea that unless everything is going wide you aren’t playing attacking rugby but a platform ruck like this – albeit I’d have preferred a bit more dominance from Sherry – is perfect for forcing a defensive decision from the opposition.

Watch Scannell directing the wide forwards to keep their depth in the strike layer as we go to the next option;

Hanrahan hits Kleyn – who was motoring around behind the point of the ruck – on the inside ball and got a good strike onto the gain line. We ended up kicking the ball away on the next phase and almost giving up a transition to the Cheetahs, but just about got away with it.

Personally, I think hitting the ball onto the edge might have been the better play here given the numbers we had, and I think Flannery referenced this moment on comms later in the half as one that should have gone wide. 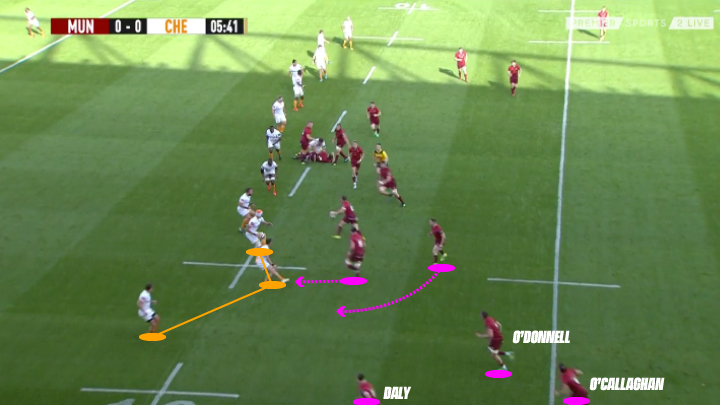 A jagged short side blitz with Holland as a decoy corner for Scannell to run off with three players on the outside? We’d be looking to hit that option if we could run this again, even if the option to Kleyn wasn’t a bad option in and of itself.

This build off Sherry’s carry was something we used quite a bit initially, and it produced some encouraging results, even if the initial carry didn’t always look like it.

Kilcoyne loses the gainline on this setup – three phases after a scrum – to a good hit from Mahoje but O’Callaghan and Ryan were able to tailor their support lines to secure the ruck.

When the ball resets, we’ve already built our next phase and I’m not sure if this was the plan all along or an off the cuff build on the back of the lost gain line, but it was really impressive. 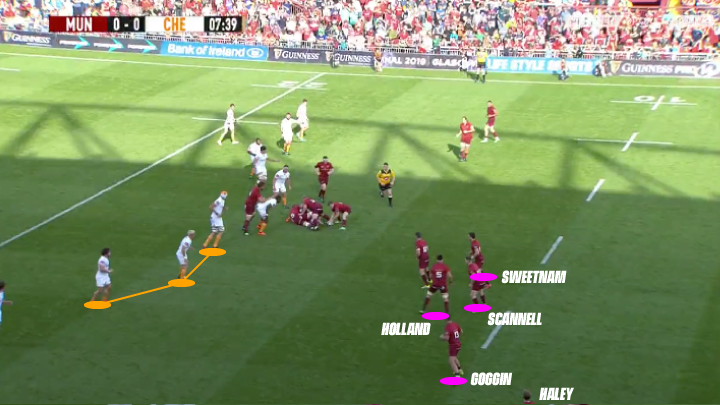 Hanrahan has Holland, Scannell, Goggin and Haley to choose from in a narrow punch formation with the opposition 10 defending outside a slow moving tight five forward in the “B” position. Sweetnam is hiding right behind Hanrahan as a breaking option that can attack either side.

We used Goggin as disrupting decoy runner to overload the Cheetahs defence, scrag defenders away from the gainline … 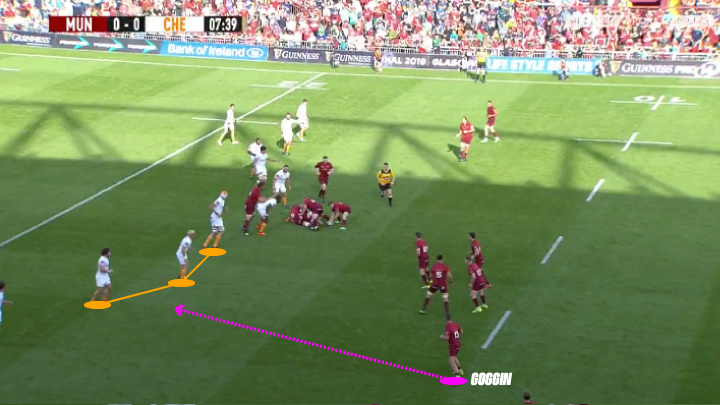 … and this action left Sweetnam and Scannell with space to attack from the second layer.

Let’s look at how it played out.

The offload didn’t quite work out but look at the way that Scannell arced around Goggin’s disrupting line to go right for where the space was. Sweetnam was attacking from behind Hanrahan and this play was designed to get that pass around the corner if we couldn’t get the clean break. 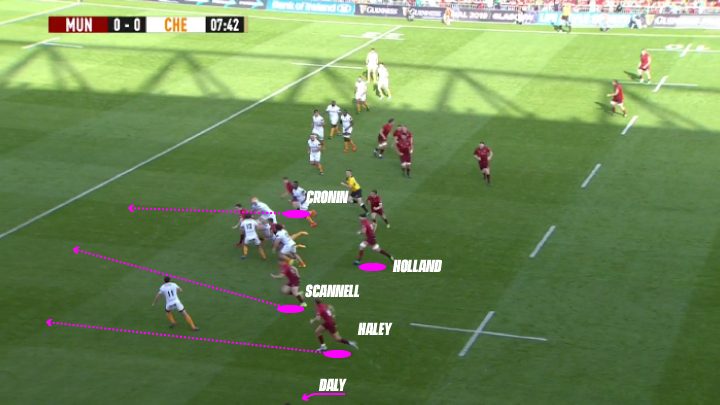 If this ball goes to Scannell’s hands – and it almost did – he’d have Haley and Daly on his outside shoulder with Neil Cronin breaking on his inside shoulder with Billy Holland floating behind as ruck support if required.

That’s really good stuff and targeted at the Cheetah’s “C” defender which would have been a weakness of theirs pre-game.

Our working in structuring big openside plays looked to have improved too, and it was founded on forward handling.

Look at John Ryan in this position; 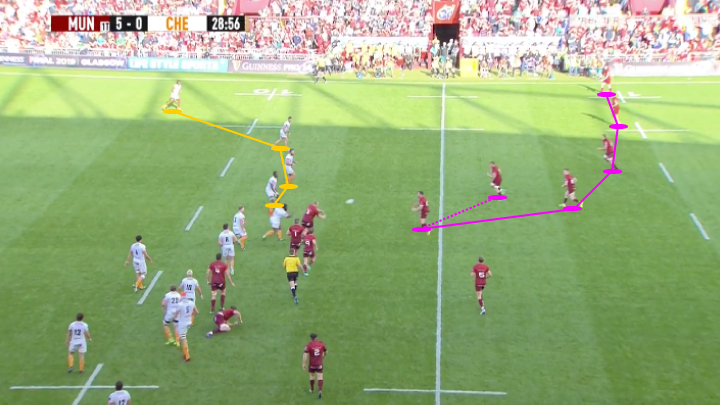 He takes the ball right to the gainline and fires a perfect pass back to Hanrahan, who has O’Donnell as a decoy and Scannell as a wide passing option. We get this ball to Botha on the edge and make a superb break up the wing that could have been a try all on its own.

Ryan took out Nche, O’Donnell held up the C/D defender and that left Scannell to find the isolated man on the edge of the defence. 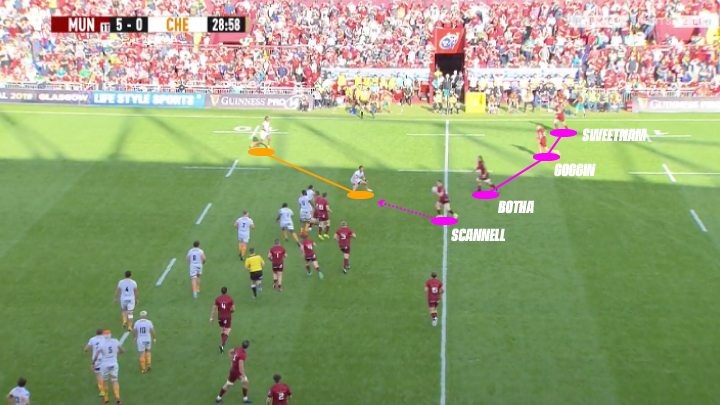 These isolations are the end result of a well-executed wide platform play like this.

Let’s see how the break goes;

Botha’s pace here is outstanding and actually takes a bit of our support on the outside out. He does well not to get scragged and isolated – Goggin and O’Donnell clean him out well. After the reset, we create a multi-option structure again. 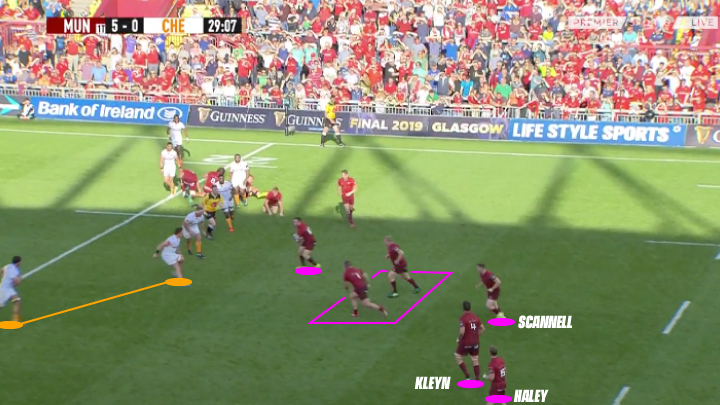 Kilcoyne and Ryan are in a screen, with Scannell tucked behind. Hanrahan has two options here and this is what you want for your 10 – the opportunity to make a play, make a decision and make something happen.

JJ can spread this back to Scannell and take the Cheetahs on in midfield with Kleyn hitting it up, or see if we can get Haley into space. Or he can hit Kilcoyne and go for that big gap outside the “C” defender that he can see.

This is what you want off a break like that – multiple options.

Kilcoyne’s carry was quite good and the only criticism I’d have of it is that we didn’t get a scrumhalf – doesn’t have to be Cronin – in to get this ball away. Kilcoyne had to play the ball off the floor which disrupted the flow completely but even then, we didn’t break structure.

Look at the way JJ brings Kleyn in off a tip on pass and how Kleyn looks for an offload to Sherry going through at the space outside the tackle.

This was always likely on this play but we didn’t panic and immediately latch on for a basic reset carry. Cronin was right in position this time, and when we moved the ball we had immediate options.

Hanrahan passed to Scannell, who arcs outside a Holland decoy run to bring Daly and O’Callaghan into the game with a decent carry.

From there, a Sherry tip on pass to Ryan, who makes a superb carry up the middle before we return to structure again;

Look at the Holland and Scannell decoy option again; 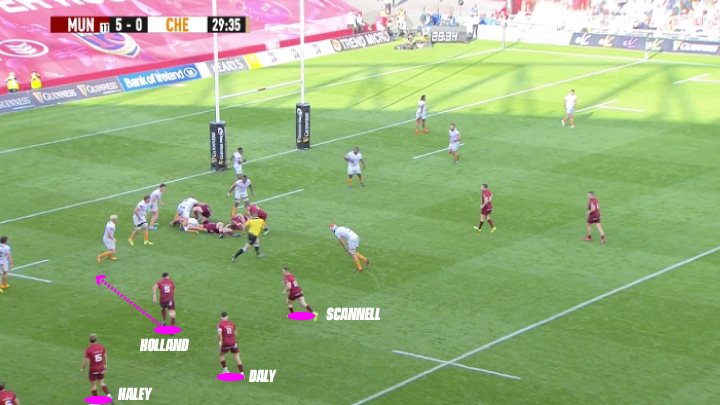 That created a corner for us to work with, with Haley and O’Callaghan as possible wide finishers. That didn’t happen but we did set up solid territory on the 5m line, from which we would score a few phases later.

Ideally, I think I’d have liked O’Callaghan to be standing where Haley was to prevent the Cheetahs from crowding us out towards the touchline – his carrying presence would have left us a crack to go after in the 5m, in my opinion.

What did we see here?

We saw good patience here. We saw a constant rejigging of shape on multiple phases. We saw a range of forward passing. We saw a constant use of decoy runners, attacking structures and different pass options in the second layer. All in all, that’s pretty good for this time of year. We’ll see how we go as the early rounds progress but our work in the early part of this game while it was still in the balance show a progression in our attacking intent over the summer, and that’s before we get to our work on transition and off of setpiece.

It’ll be worth your while keeping track of these things as we head towards the early season InterPro rounds.