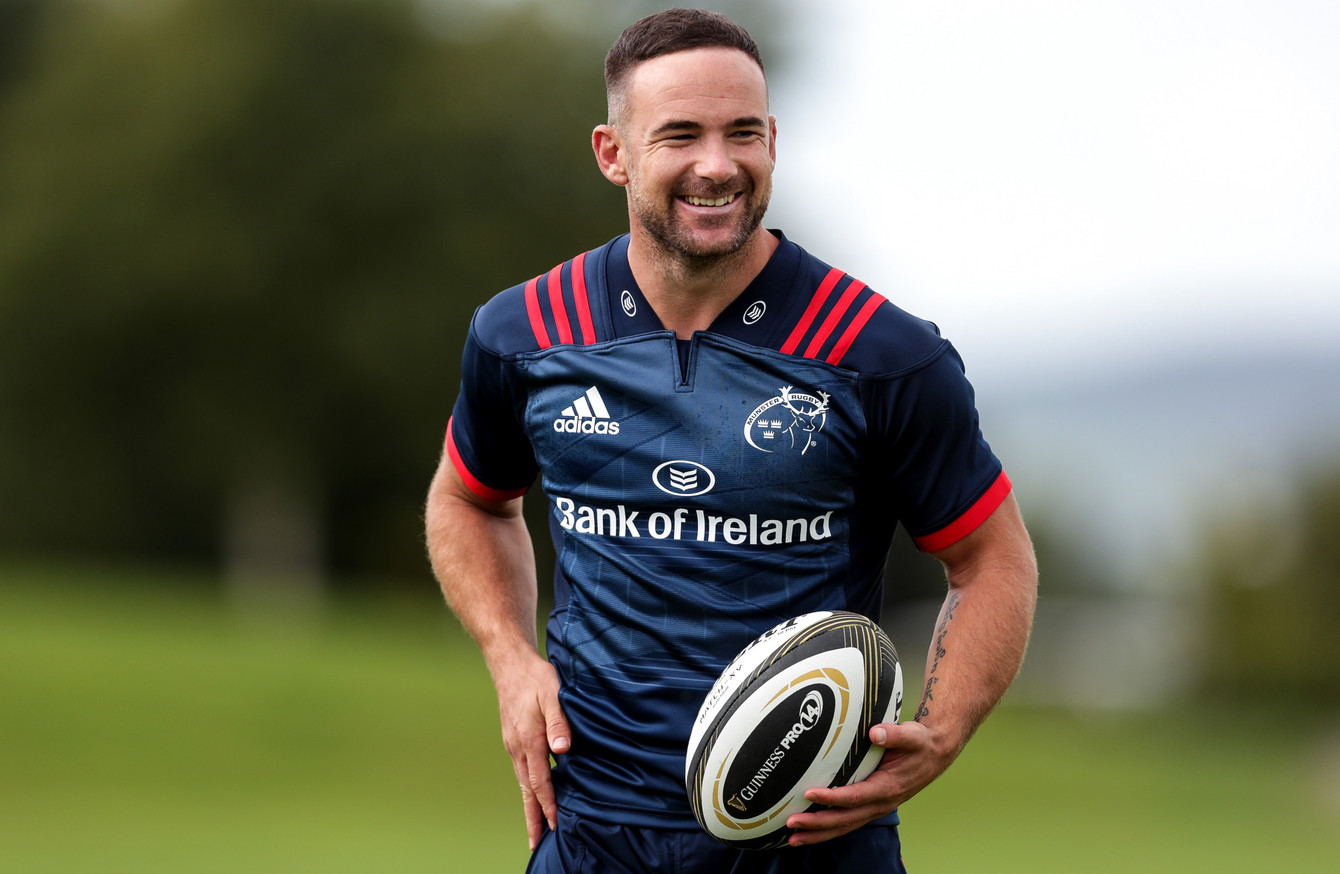 “Work smart, not hard. But work bloody hard too.”

That’s what my old coach, Bill, down in New Zealand used to tell the young nines coming up through the underage levels. As a former scrumhalf himself – he had the mouthy attitude and chip on his shoulder that’s a basic requirement of the position – Bill knew that on a good day, your scrumhalf will touch the ball more than any other player so if they’re having a bad day, you’re all having a bad day. The influence of the #10 is something entirely of itself when we look at overall attacking structure but the scrumhalf is almost always the one who’s going to be feeding the ball to him or her. You can have the best #10 in the world but if the scrumhalf “feeding” them possession isn’t up to snuff, they’ll look ordinary and nothing will work.

If the #10 is the brain of the team, your #9 is the heart – they set the rhythm of your team, they pump ball around the field and if they stop working properly you’re fucked.

With the work that a scrumhalf does – a good day will see them interact with the ball 100 plus times – they’ll need to work hard to ensure they are literally getting where they need to be when they need to be there. Cardiovascular performance is a big indicator of a good scrumhalf because the more “shook” you are ruck to ruck when operating at tempo, the more likely your are to make a handling error or passing error. When a scrumhalf is making errors at the ruck – taking too long, making bad passes or bad decisions – what they’re actually doing is slowing you down. Those errors spread through the attack like a virus that targets your time and in today’s game, you need every second of a headstart that you can get.

Scrumhalves, at their core, have to manage time.

The biggest criticism I have of most scrumhalves is that some of them are actually working too hard. One of my biggest bugbears is when I see a scrumhalf running farther than he needs to, especially when they have one of the most cardio-intensive positions on the pitch and the position most affected by a lack of cardio.

All the best scrumhalves – and I mean all of them – make sure they only run as far as they have to.

Have a look at these two examples from Friday night’s game against the Southern Kings.

The first is Neil Cronin triggering a strike play off a maul.

Now there were a few things wrong with this move – I think Goggin overran his line and forced Bleyendall to carry, while I also think that Cloete’s pinch line off Scannell is a little flat. Cronin ends up having to clean out the ruck as Goggin was in an overrun position and had to readjust. Watch the GIF back again and only watch Cronin’s line. 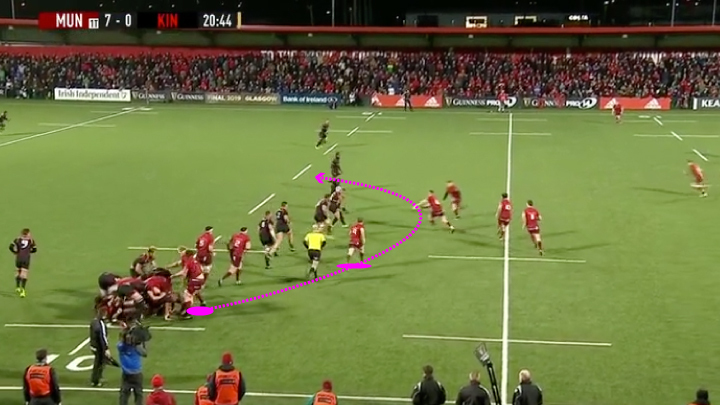 Now, maybe he’s arcing around in support but he’s covering way more ground than he needs to. Think of it as the difference between running in a straight line and running in an arc. The endpoint of this attack was around 25m away from the start of the play. If Cronin ran in a perfect arc, he’d have travelled 39m at support line pace. He actually ran further than that because his line was more pronounced. It doesn’t sound that much but, after a while, those metres add up. Everyone, no matter who they are, only has so many kilometres to run and when you arrive at a ruck late or with your body straining so much you blow the pass, you’ll want those extra metres back – believe me.

This is the support line to the ruck and the one thing to know here is that the shortest distance between two points is a straight line. Any time you’re doing any different, you’re running more than you need to.

Go back to that GIF and watch Cronin as he approaches the ruck. In the seconds before he realises he has to clean, he doesn’t look at his potential targets once. That’s something that happens Cronin every other ruck. All good scrumhalves shave time off their ruck by “looking and running”. Essentially, when you’re going to a ruck you pick your targets before arriving so that you have a pass in mind before you put your hands on the ball. That won’t always play out like that, but you see all good scrumhalves scanning the field as they approach the ruck, not when they arrive. If your alignment is good, you’re generating quick ball as long as the presentation doesn’t spoil it. If the alignment outside you is slow then, sure, you can reset.

These two things were a constant in Cronin’s play in the first half and it’s typical of a guy who’s adjusting to a higher level of rugby and wanting to make the best impression he can. You can see that’s something he’s trying to work on.

Look at the phases below.

Phase 1: Decent pass but the line to the ruck is a little “fat” and it adds time to the next phase. He is “looking and running” though, so that’s good.

Phase 2: Good flat pass at a good pace and his angle of approach to the next ruck is right where it needs to be. There’s no “look and run”. The tempo at the next ruck is poor though – not all his fault as the presentation wasn’t great – and we lose time on the next phase.

Phase 3: Line to the ruck is a little fat but he’s looking and running before reaching it and knows his target before getting hands on the ball.

Compare that to Alby Mathewson, a highly experienced former All Black.

Mathewson follows his pass in a straight line, tracking the carry along the line of the defence with the knowledge of the call prior to the throw giving him a rough idea of where he’s going.

He’s not wasting any steps here and, right before the ruck, you can see him assessing the defensive situation on the reverse side of the ruck. When the play breaks, we see Mathewson’s smart work again.

Watch him here – again, Red #21. Once he sees Wycherley popping that ball back to Bleyendaal, Mathewson’s off on his bike.

He’s doing two things here – running towards the break to act as a support player but also to get a head start on any ruck that evolves down the flank. 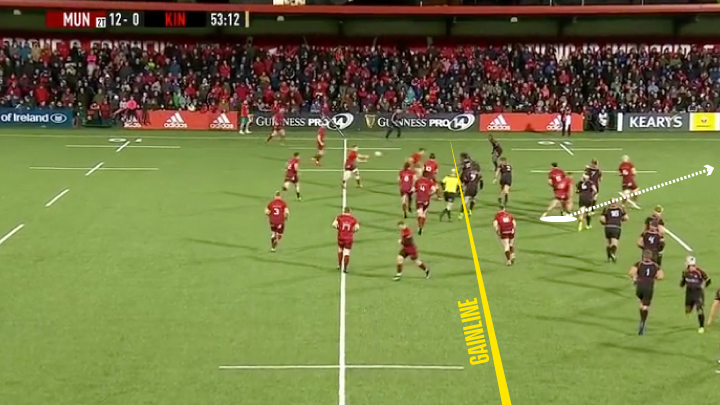 Mathewson is running ahead of the play so he doesn’t have to catch up with it. A lot of that comes from experience, which Mathewson has in spades. Essentially, if you see 4000 breaks down the flanks you get a sixth sense for where you need to be and what you need to do. If you know the script, why not skip ahead?

When the ruck develops after the break, Mathewson is right where he needs to be. Watch his work here;

Black #13 slows Mathewson’s route to the ruck but the former All Black’s positioning is such that it doesn’t matter all that much. He has time to work with. Once he gets his hands on the ball, Mathewson takes #2 on a walk before setting Bleyendaal away to execute a 4 on 2 overload.

Look at what he does after – he’s straight off on a hard support line and could have easily scored a try himself after he doubled up on Conway’s kick. That wasn’t just on that break – Mathewson’s always looking to “cut corners”.

Look at him angling on a possible break here. Little things like this are the difference between a promising scrumhalf – and Cronin is a good scrumhalf who’s got potential to be very good – making his way in his first season at pro-level and a capped All Black who’s been a pro for close to 20 years.