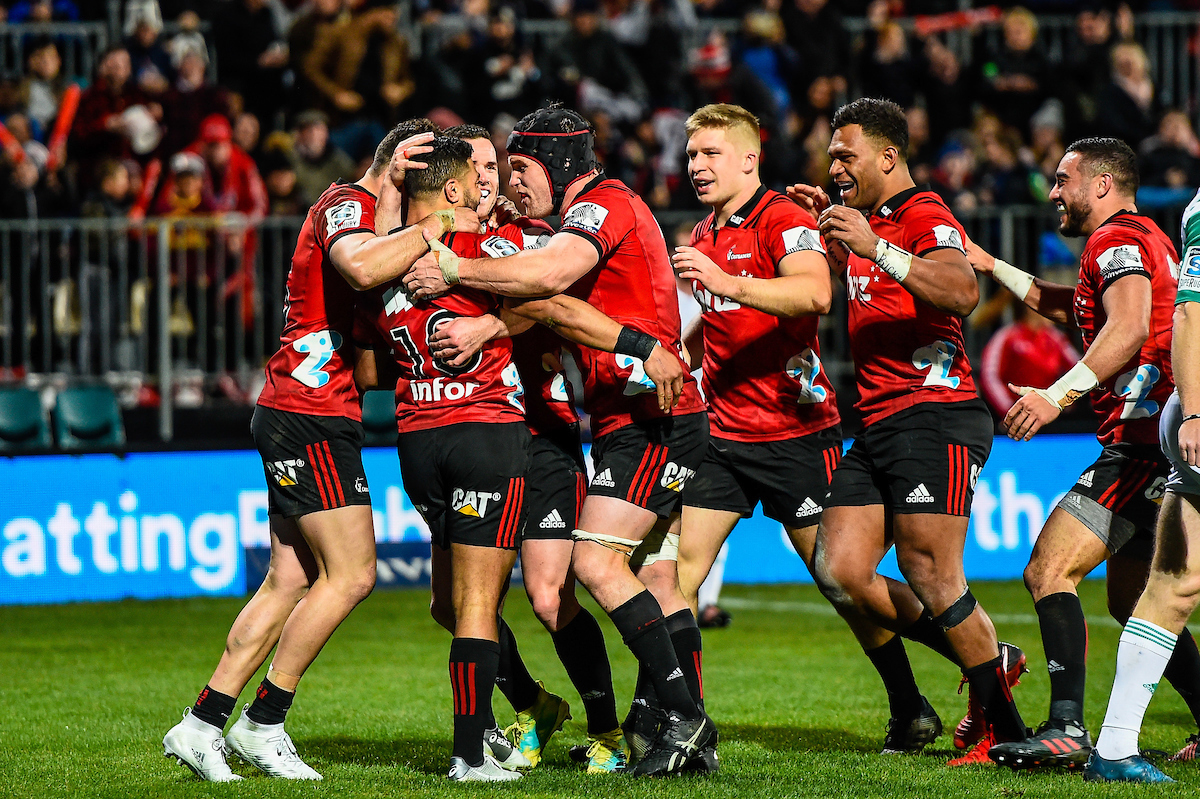 The Crusaders are the reddest of red hot favourites to retain their Super Rugby title over the course of the next few weeks.

They move into the playoff spots against the Sharks as the top seed in the competition, with only two losses all season and 17 points more than their nearest rivals – the Lions – in second place. They haven’t lost a game in four months and have made some excellent opposition look decidedly average along the way. I’ve been paying close attention to what the ‘Saders have been doing for quite a while (they’re the only side I’ve seen play live more than Munster) but that focus has increased as of late, for obvious reasons.

Ronan O’Gara coaching at the Crusaders? If you’ve ever lived in NZ, you’ll know what a buzz it is to see a fellow Irishman involved at such a level.

I could spend the rest of the week highlighting the things they do that make them so good – and I might just do that – but the one thing I’ve been consistently impressed with is the quality of their feints, screens and play design. Like all high-quality sides, the Crusaders are incredibly intelligent in the way they construct their attacking plays while retaining a solid base to fall back on if and when they have to reset.

Their work on multiphase is of huge interest to me, especially given the way that Munster’s multiphase possessions began to look towards the end of last season and the incoming arrival of Joey Carbery – a player who I feel maps quite closely to the Crusader’s first five Richie Mo’unga.

Have a look at this sequence of possession, starting at the 5th phase after this set piece break;

On the 6th, 7th and 8th phase, the Crusaders use narrow three-man carrying screens to shift position across the pitch. Every phase gives the Highlanders a different threat to deal with. 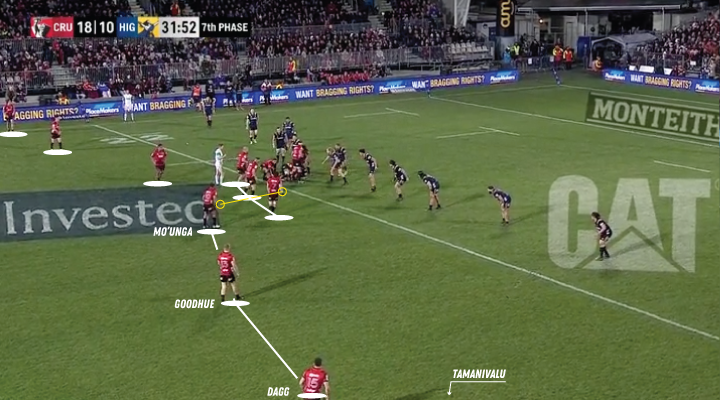 On this phase, the Highlanders have a legitimate blindside threat to deal with, a tight one out carry (with tip-on options between the three carriers) that’s almost guaranteed to retain possession and a live option of a pullback pass to Mo’unga in the second layer with Goodhue, Dagg and Tamanivalu offering openside attacking width.

All the way along, Mo’unga tucks in behind a tight screen of forwards to give that pass back option off the narrow carry. The screen might coalesce at the last minute but it’s a planned structure used by the Crusaders to give them multiple screens and attacking options on every phase.

Even on this initial recovery phase, there are multiple options. 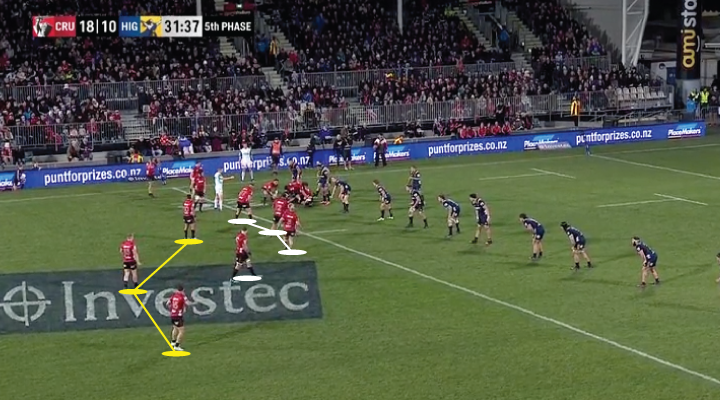 If this ball gets pulled back, the Crusaders have Read to use as a wider carrying option, passing option or as a screen for Goodhue and Mo’unga.

When the possession comes to the end of the forward numbers, the Crusader backs alter their alignment and look to attack the fraying Highlander edge defence populated by forwards in open space. 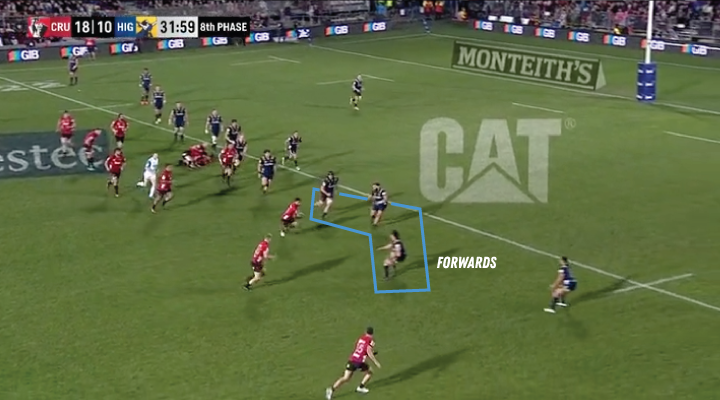 This gives the agile, pacey Mo’unga space to attack with, you guessed it, multiple options to use. 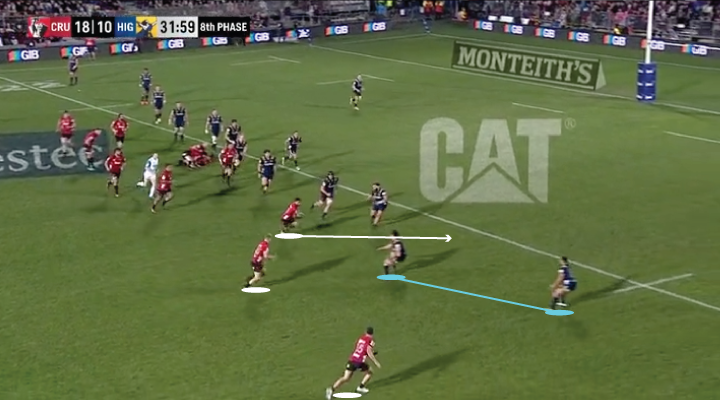 He can go himself, he can kick through, he can pass to the outside shoulder, or he can take the man and try to offload (as he went for). It didn’t work on this occasion but it is a superb example of how the Crusaders use their multiphase possessions constructively to create opportunities instead of hoping for one.

This kind of reliable multiphase possession with multiple options is a hallmark of how the Crusaders play these days.

That isn’t to say that they’ve abandoned the 2-4-2 structure – far from it. 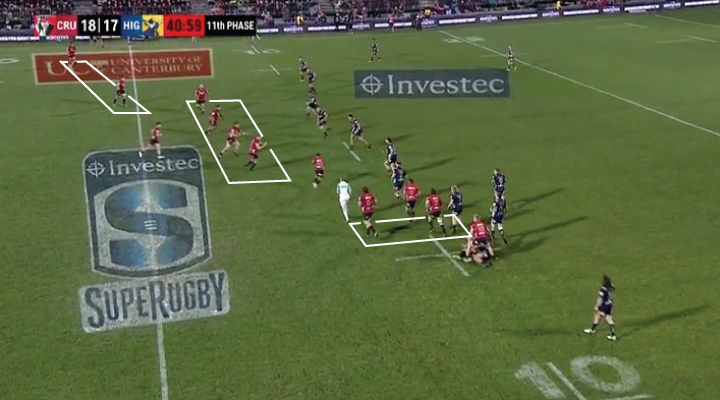 When the Crusaders adopt this kind of structure, you’ll see Mo’unga take a more “unprotected” position away from the cover of a screen.

You can see Mo’unga alternating between screen cover and isolated possession here and it’s a good example of the Crusader’s flexibility and ease of playing off 9 and 10. When the opportunity arrives for Mo’unga to attack the break, he does so with lethal pace, stepping and offloading.

Everything after that initial Mo’unga break is just elite level offloading and running angles but it can’t happen without the Crusader’s excellent feinting work.

Look at the pod of four forwards in midfield; 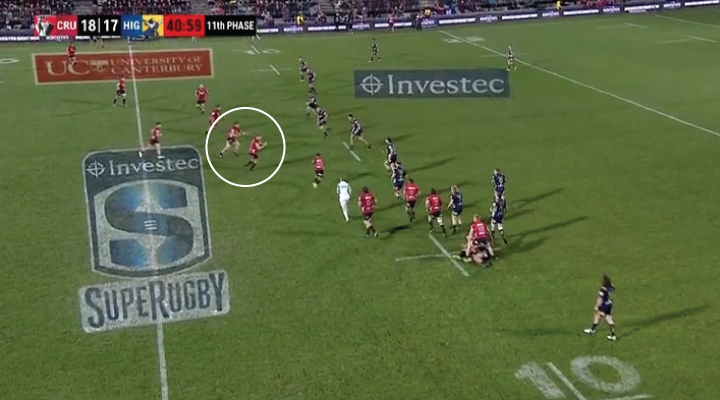 Two of them are actively showing for the ball and looking like viable carrying threats. This creates the space for Mo’unga to attack. Rudimentary stuff, you’d think, but you’d be surprised how many professionals don’t do this small bit of work to sell the decoy/option. Essentially, always look like you’re getting the ball, even if you’re not.

When you sell the opposition defence on one thing – the carry – it leaves them open for an attack elsewhere. Look how focused the Highlanders were on the midfield carry; 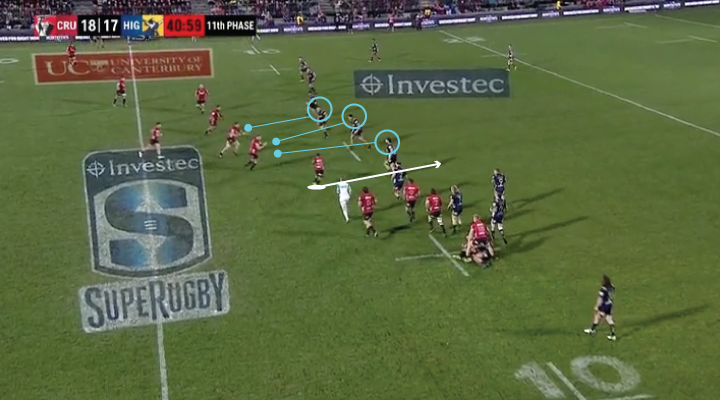 That gives Mo’unga the space that he needs to set the sequence leading to the try into motion but it’s the switching between different states – playing off 9, hiding behind a heavy screen and using a strike/stitching option at first receiver – that makes the Crusaders tick.

Here he attacks the line in a similar way to above;

When the ball comes back it hits Whitelock and Read in the wide areas (two of the 2-4-2 structure) and the Crusaders can attack on the openside. A few phases later, Mo’unga attacks from behind an advanced screen.

This is where the Crusaders take their screen to the next level by actively hampering the defences track across. 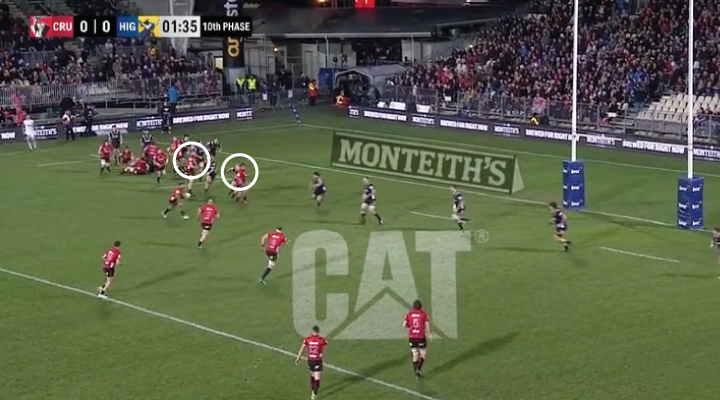 The screen players let their lazy running lines continue into the Highlander track across and that gives Mo’unga the kind of angles and isolations that he likes to work with. 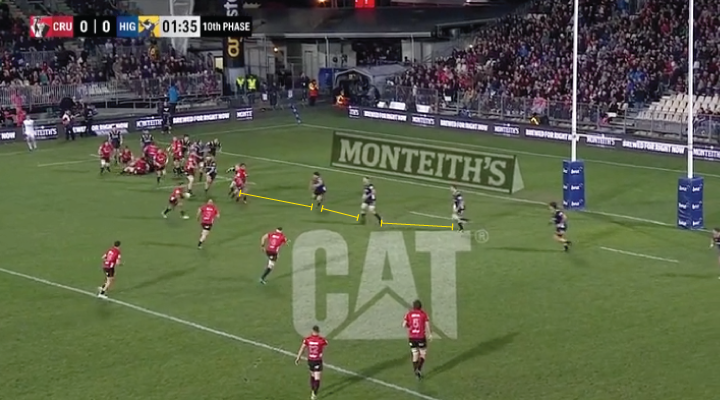 He didn’t get a linebreak on this occasion but this kind of strike from first receiver keeps the defence in a constant state of decision making on plays like this. Will Mo’unga carry close in from behind the screen, hit Franks or pull the ball back again?

Three phases later, he attacks from behind the screen again;

These layers of screening and feinting are extremely difficult to defend against on multiphase possession and despite the time on the clock – the above samples are at the beginning and end of the first half – the Crusaders are adept at stretching a defence to its breaking point.

The Crusader’s deceptive work isn’t limited to open play and, if anything, their set-piece work is better. Their work off the lineout, in particular, is as good as there is in the game today.

The initial maul feint, the screen by 6 and 3 to unsight the inside defenders, the run by the winger to stick them and then the arcing loop run by the hooker off the shovel pass from Todd.

That opens up the offload on either side of the isolated defender but the primary option is the pass back inside to the winger with Crotty adding a finishing option from outside of Mo’unga.

Yes, the offloading is great, but it’s all set up by the position and accuracy of the lineout scheme and the multiple decoy points within it;

You can see the angle of Crotty’s run from outside Mo’unga here and how the switch angle they run on each other creates the space to finish the move.

The Crusaders would score a phase or two later with men to spare;

It all came from the initial line break, all done through the power of the Crusaders use of feinting and subversion.

They’re a joy to watch.