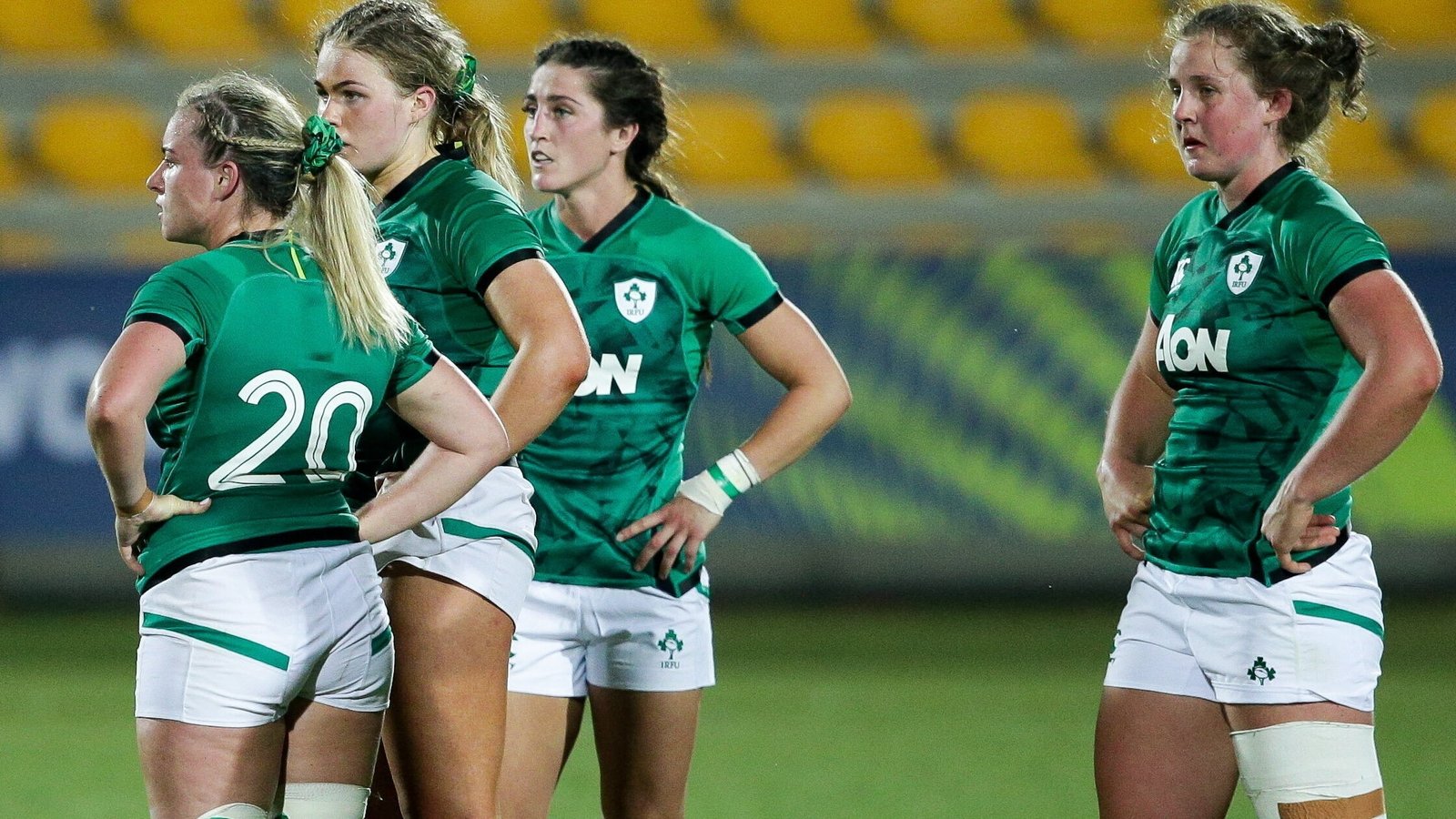 Ireland's loss to Spain was built on multiple errors in a sequence.

When you see the headline of Ireland losing to Spain, your immediate reaction could be one of “SPAIN???” and, if your only point of reference is the Men’s game, you’d be right.

In the Women’s game, Spain are ranked 9th in the world. Ireland are ranked 8th. So for Ireland to lose narrowly to this Spanish side isn’t a shock, even if Ireland could and should have been expected to win. So how did it happen?

Lots of reasons. There was some poor discipline around the breakdown, some handling errors and enough of both to visibly knock the confidence out of the team as the game progressed. Ireland didn’t set out to play badly, obviously, and this game seemed like one of those ones where enough errors compounded in a sequence at key times to leak momentum and energy like a slow burst on a tyre.

The key area of concern – and the one with the most scope for improvement – was the set-piece.

Ireland’s scrum and lineout were very, very poor and if that trend continues against Italy, we’ll lose that game too. Offensively speaking, we were pretty good and Beibheinn Parson’s outstanding try came from the back of a solid lineout launch. 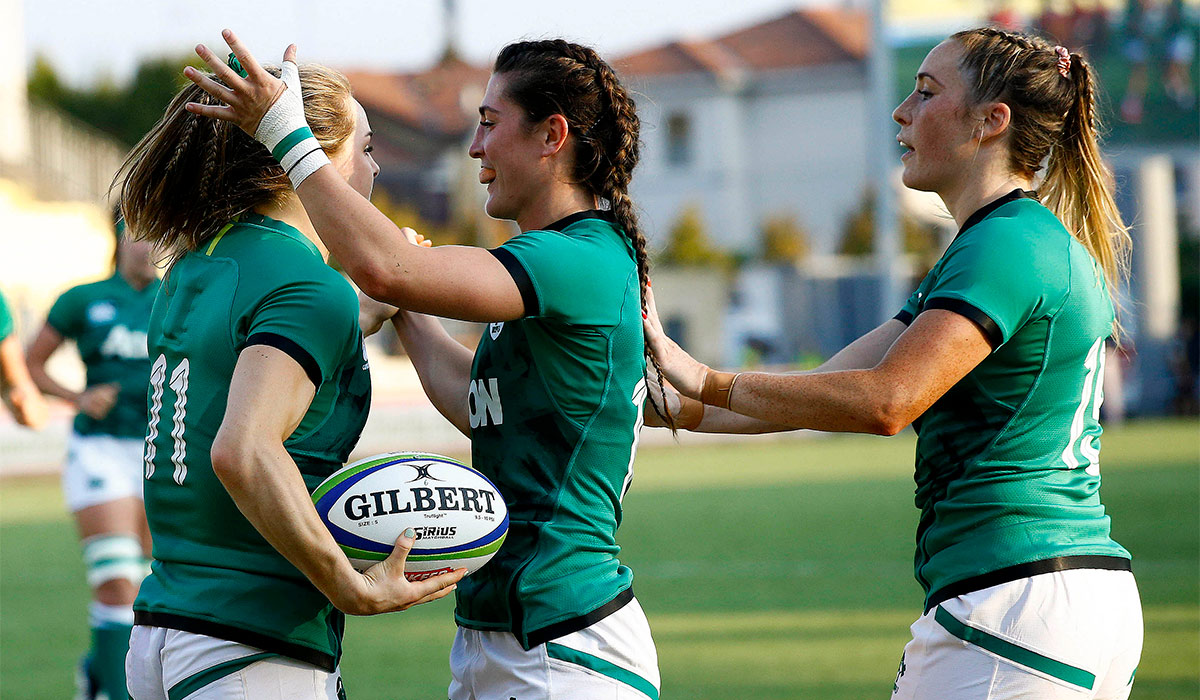 The lineout is an important part of the modern game but in the women’s game, its importance is supercharged. As we saw in the interprovincial series just gone, being able to secure your own lineout possession while disrupting the opposition’s put in is a key step to heavily limiting the opposition’s ability to attack you effectively.

So, if you reliably nail your own lineout possession, you will be in a statistically superior position relative to the average when it comes to launching your phase play.

When Ireland launched off our lineout successfully, we produced our only score of the game within the first 10 minutes.

This is a very well-executed play that got our most dangerous attacker, Beibhinn Parsons, onto the ball in an area where she is legitimately deadly. The won lineout allowed Ireland to break in a good position and begin to manipulate the opposition defence in a way that could produce relatively predictable outcomes.

This was not the norm during the game from an Irish perspective, however.

Yes, Spain are throwing one or two counter-launch pods in the air here – which is always a good tactic when you’ve got the kind of rangy, relatively light forwards that Spain do – but our own work on a lot of these lineouts isn’t at the level it should be, either from a schematic, throwing or lifting perspective. 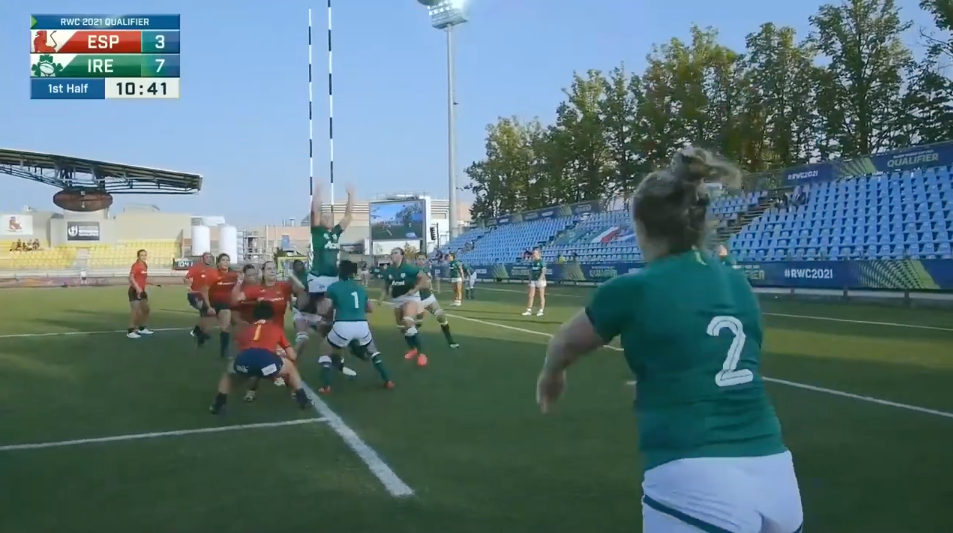 This one around the 10-minute mark on our own 5m line was concerning, even early on, because of these fundamental issues.  One consistent issue, for me, was that despite winning the race into the air on most of these throws, our lift quality gave Spain an “in”. 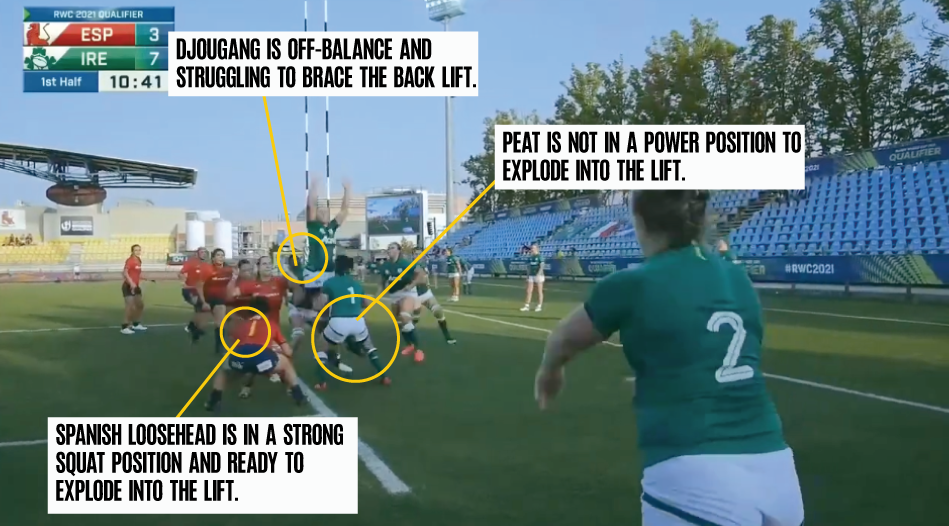 As a result, our jumper Brittany Hogan, is always tilting off to the side, which means that Peat’s front lift gets slower and weaker as Hogan goes higher and further “off line”. 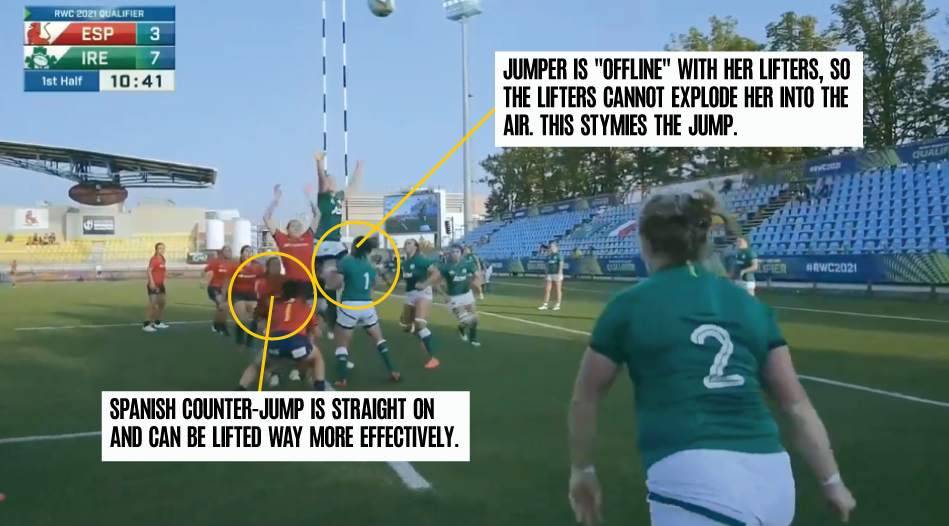 Spain, on the other hand, are in a much stronger position. The loosehead is squat and low so she can explode up with the jumper so, despite losing the race into the air, the counter jumper is level with the Irish jumper when the ball comes in.

This wasn’t an isolated issue. Lift quality is a hugely important factor in a successful lineout. All too often we weren’t low enough to start – even taking into account that we were moving as part of a scheme – so as a result, our speed in the air slowed after the jumper left the ground. 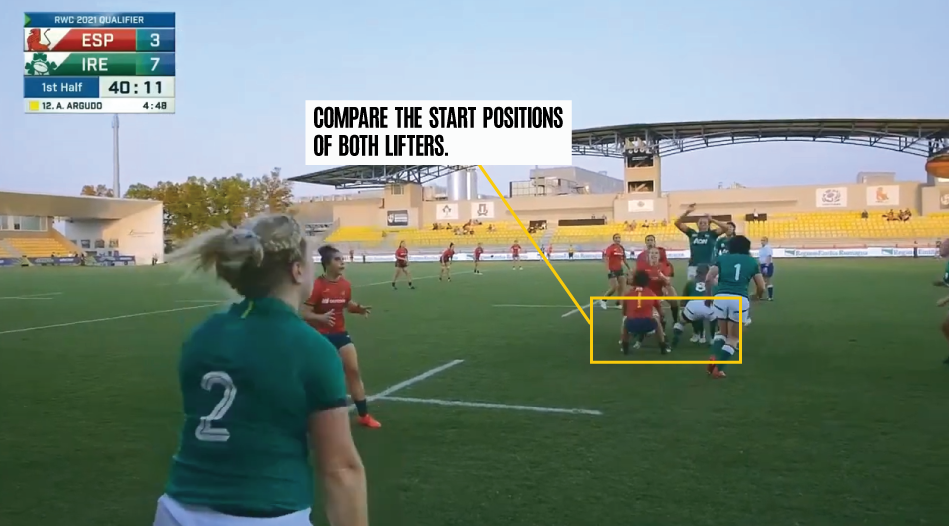 Even here, I felt Fryday’s jump was a little static – which increases the load on Hogan – but Spain, once again, are in a better position to succeed because of these basics. Yes, again, it’s easier when you’re lifting from a static position at the front compared to a moving scheme but we’re calling the lineout – we need to be better.

Without a stable lineout platform, we struggled to maintain any kind of consistent position in the Spanish half. We were far from perfect on the lineouts we completed successfully for a variety of different reasons, from poor offensive decision making to handling errors at pace.

All of these little errors aren’t killers on their own but each one takes a toll as the game progresses, which can knock confidence throughout the team to the point where even getting a simple lineout launch becomes a massive deal. That kind of emotional toll can cost you games and I really do believe that our lineout errors, in particular, were a massive factor in this game getting away from us.

If we can get our ball down, maul – we were quite good in this facet of the game – we have the weapons to hurt teams when we can force them to make decisions post-collision loss.

This try was struck off for a knock-on in the ruck but everything up to that is exactly what this Irish team will look to improve on against Italy on Sunday.

If they can, we can get a result that will keep our World Cup hopes alive. If we can’t, and if we are inconsistent at the lineout once again, make no mistake – we can and will lose this game against Italy.

It’s high stakes stuff, but we’ll learn a lot about this group one way or the other.