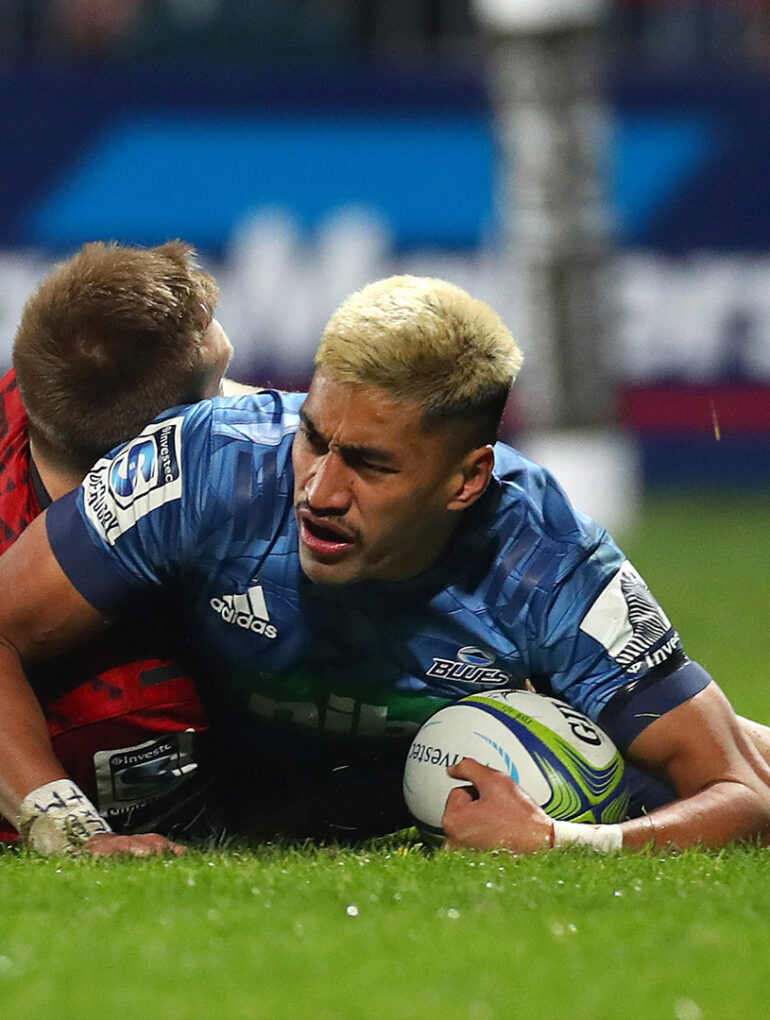 What has the evolution of Ioane from centre, to wing, back to centre shown us?

By Tom Savage8 min read
Rieko Ioane is a very good rugby player. I mean, you know this, and you don’t need me to tell you, but when you look at his last 12 months, you could be forgiven for assuming that Rieko Ioane has been the victim of a catastrophic drop off in form.

He went from breaking onto the test scene as a 19-year-old, to starting against the Lions, to ousting Ardie Savea from a regular slot as the All Blacks starting blindside winger to being nominated for World Player of the Year and Breakout Player of the Year in 2017. Not many players do that. He went onto be the leading try-scorer in the 2018 Rugby Championship and looked like one of those players that were set to have a big World Cup in 2019. And then it all just seemed to stall for him.

Ioane had one poor game in a loss to Australia, missed the next game through injury and then found himself behind George Bridge and Sevu Reece as New Zealand went towards the World Cup. He never got his place back in a meaningful way. He only started one pool game at the tournament and the Bronze final; the tournament just seemed to pass Ioane by.

Was this the product of one bad game against Australia? I wouldn’t think so. Ioane still had a remarkable try-scoring record. He has 24 tries in 29 test appearances for the All Blacks. He has 45 tries in 65 appearances for Auckland and the Blues in Super Rugby. I think Ioane’s 2019 wasn’t down to what he could do, but rather what he couldn’t cover for.

As the All Blacks doubled down on their dual flyhalf strategy – Mo’unga at #10 and Barrett at #15 after McKenzie’s season-ending injury – it put pressure on their backfield composition. Sevu Reece gave the All Blacks a badly needed physical presence outside Goodhue on the right-wing on both sides of the ball. Reece seemed to be considered a more impactful defender – especially when compared with some of Ioane’s earlier slips in 2019 – and looked a more direct, more explosive runner with the ball in hand.

With Barrett taking up a lot of handling and playmaking responsibilities in the All Blacks attacking schemes, Hansen needed a player to act as an auxiliary fullback positionally while still offering a potent try-scoring threat and advanced kicking; in this regard, George Bridge fitted the bill perfectly as a younger, more athletic replacement for Ben Smith.

It’s not that Ioane wasn’t a physical, steppy, explosive carrier of the ball or a competent positional defender, it’s just that when it came to Reece and Bridge, they offered a little more of those qualities specifically next to Barrett than what Ioane did.

Was his disappointing World Cup experience the agitating factor to make a move back to the #13 jersey?

Perhaps. Ioane first came to prominence as an outside centre and, despite playing as a winger for most of the last few seasons, the Blues seem committed to giving him a shot at nailing down the #13 jersey long-term. Prior to Super Rugby Aotearoa in January, Blues’ assistant Dan Halangahu spoke about Rieko’s transition to Stuff.

“He’s more than happy to play wherever we need him because he’s the kind of guy who wants to do what’s best for the Blues.

“But that transition to midfield is something he is excited about. The All Blacks want to see that too. Everyone wants to see what Rieko can do in midfield.

The emphasis on what the All Blacks want to see is mine, but it is an interesting note.

“We’re committed to giving Rieko a good crack at centre.

“It will be up to him whether he becomes the starting centre. Nobody is assured of any position, so he understands that. He made it clear he’ll do whatever is best for the team.

“But I’ve seen him play centre and he’s pretty outstanding there as well.”

When you consider Ioane’s strengths as displayed at the very highest level as a winger, there’s a lot that transfers over to an elite attacking centre. From a defensive POV, I think Ioane is functional as a midfield defender. That is to say, far from a poor defender but I’d be hesitant to describe him as a lockdown edge defender in the same way that I would for Lukhanyo Am.

The decisive Crusaders’ try at the weekend was a bit of a headless moment for Ioane, in my opinion. Have a look at the clip below;

For me, I think Ioane has to bounce away from this contact point rather than getting entangled in the breakdown. I get the opportunity to jackal, but the balance of power at this ruck is always with the Crusaders and, with the ruck won, there’s a massive slow lane on the edge of the Blues defence. Tuungafasi takes up Ioane’s position at the edge and the break happens outside him when Telea is left with no option but to press up.

I think Ioane needs to read this ruck better. I’d like him ID the contact area – momentum stalled on the tackle, adequate cover sliding across to cover the break, lots of Crusaders ruck support to make a jackal high-risk – and push off Goodhue to stay as the first defender inside Telea.

This space that develops between Telea and the contact point is filled by Tuungafasi – the worst option in this case – as the flanker Papili’i swarms the ruck. 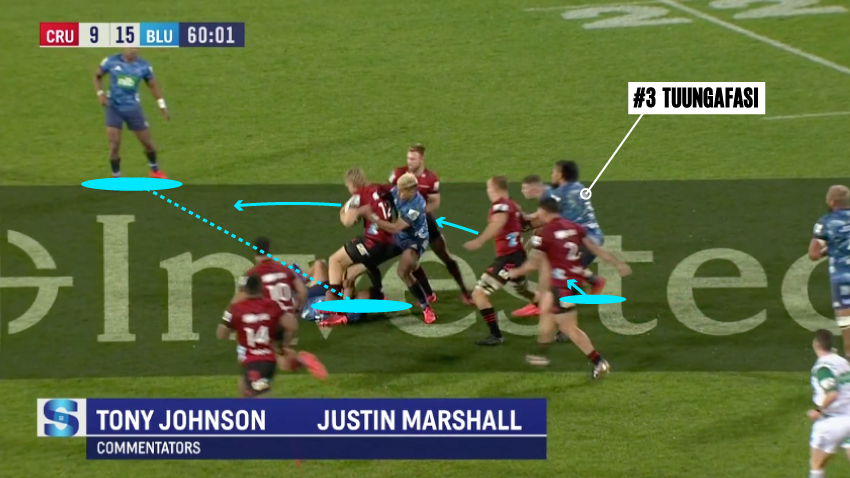 Ideally, I’d want Ioane to take that position instead. Push down on Goodhue, hold in the narrow space until Tuungafasi clears the ruck and then shuttle wide to cover the overlap. 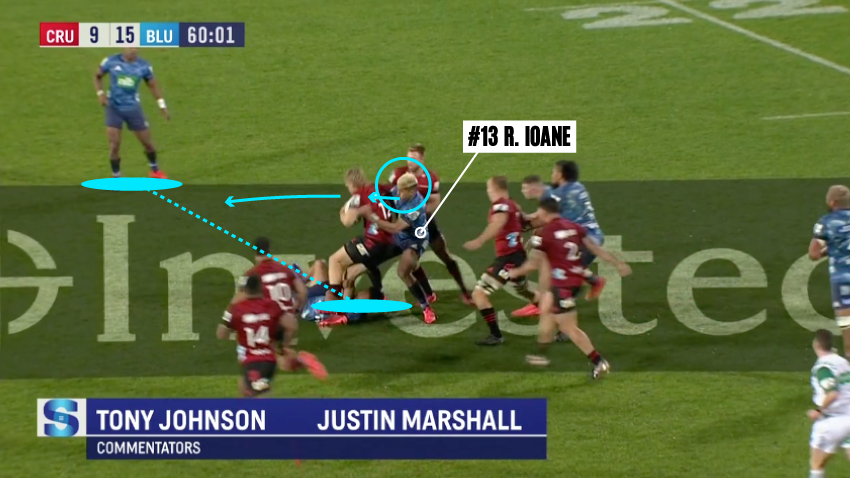 Ultimately, I would argue that if you pick Ioane at #13 right now, you’re not doing it because he’s going to lock down the edge of the line for you in phase play or off the set-piece. He’s not a bad defender by any means but he’s not elite at that end of the game quite yet. I would also posit that a lot of the defensive decision making load has been split between the winger and the edge defender on modern defensive schemes.

Long story short, you pick Ioane at #13 because of what he brings in an offensive capacity. In this area of the game, he is a world-class talent.

If you’re Leon McDonald, the best picture you want for Rieko Ioane is for him to be running onto the ball at the edge of the opposition’s defensive line after two passes and with options either side. What is Ioane good at? He’s a devastating transition attacker, he picks unreal attacking support lines, he’s a good passer of the ball with a creative eye, he can offload and, most importantly of all, he scores tries.

Even before he moved back to the centre, Ioane could be seen running centre-like lines on surge plays or wide-wide action for New Zealand and the Blues so moving him to #13 was a no-brainer. Ioane isn’t really the type of midfielder that you’d want slamming into traffic to set a platform so the best way to maximise his skill set is to play a fair bit off #10 and beyond so you can involve him where he can run onto the ball from deep.

This is a good example early on in the game.

From #9 Christie, through #10 Black, through #15 Barrett to #13 Ioane hitting the line from deep with an angle to work with. This is almost the perfect spot for Ioane. He’s got the size, agility, elusiveness and burst power to challenge even the best defenders in this kind of space.

When the Blues win the ball back from the Crusaders, you can see Ioane pull way back to elongate the space between the Crusaders’ centre – Ennor – and himself.

This gives him space to accelerate, time to pick his line and give him the most amount of options to work with as the ball comes across the field to him. He picks a decent pass to Papili’i and secures the ruck afterwards but this is a good illustration of where the Blues want him.

To facilitate their dual playmakers and Ioane, the Blues play with a morphing 2-3-2-1 that can often shift over to a 1-3-2-2 depending on where there ruck is. You see the Blues going for a 3-2-1 openside shape quite a bit and I think that alignment maximises the flow of the ball to Ioane where he’s most dangerous.

You can see it roughly on the above clip but the shape is a little skewed because of the nature of how the Blues won possession in this instance.

There are a few Blues forwards in the ruck but you can make out the rough principle. 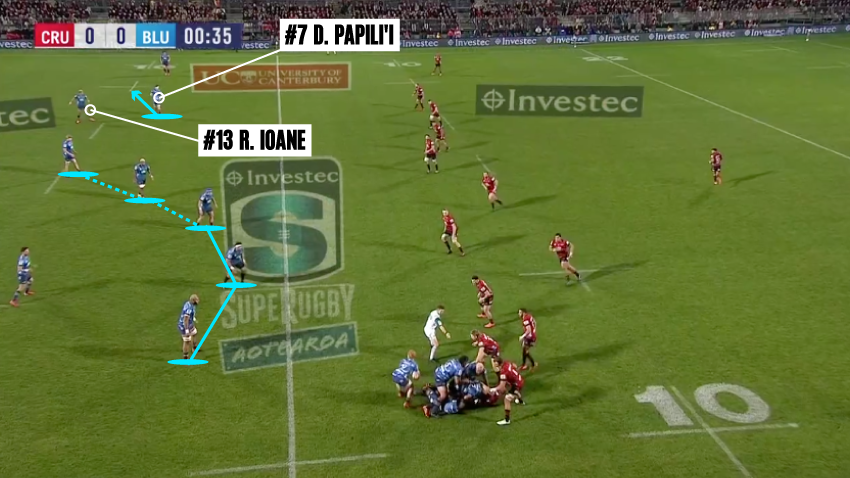 You can get a much clearer look at this shape from earlier in Super Rugby Aotearoa against the Highlanders. 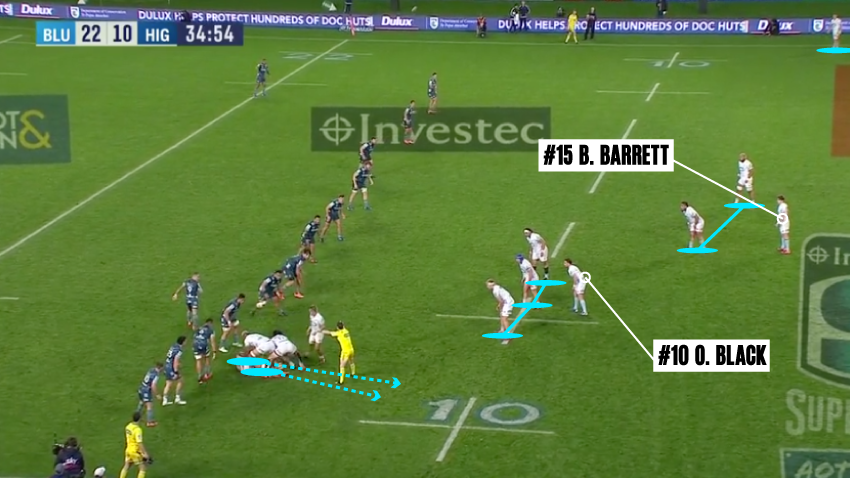 This gives the Blues a lot of narrow options but allows them to stretch out the play beyond Barrett with Ioane a key strike running option. You can see it in action up until the Blues lose the collision in the below example;

A 2-3-2-1 shape gives you a lot of central ball-carrying with a clear release to a line of backs + one forward attacking a surge if the pod of 3-2 can commit defenders and “spring the trap”.

As the play swung around to the midfield two-pod, you can see why having a runner like Ioane closer to the second playmaker is so dangerous. If this pass went to Barrett and the further out, you can see the ideal space that Ioane was occupying. 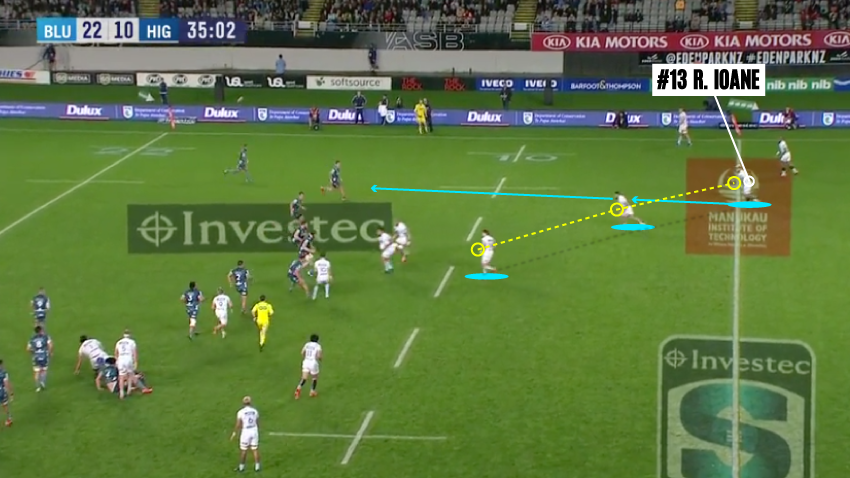 Ioane has looked consistently dangerous for the Blues in these positions and they have the shape and playmakers to consistently get him on the ball in these situations. He’s effective as a ball carrier, an off-ball threat and as a passer right on the edge of the attacking line.

His pop pass to Barrett for the kick through in the examples I’ve shown above is a really good example of his versatility in this position. He’s not just a winger player one step in, he’s got the skillset and appreciation of space to bring others into the game in those wide attacking positions.

On kick transition, he’s got the wheels and support line intelligence to be a devastating attacking weapon but this was already a known quality in Ioane’s game.

He knows exactly where to be to maximise this wide opportunity, as you’d expect for someone who was a starting All Black winger up until the last few months of 2019. The defensive part of his game and perhaps his close in ball carrying will be a work-on for him but Ioane looks too good a player for the All Blacks to miss out on at just 23 years of age.

Will Jordan’s emergence as a top-class back three player will put more pressure on that All Black selection but Ioane might well be an option going forward at #13 with Goodhue at #12 as the All Blacks re-build post World Cup.