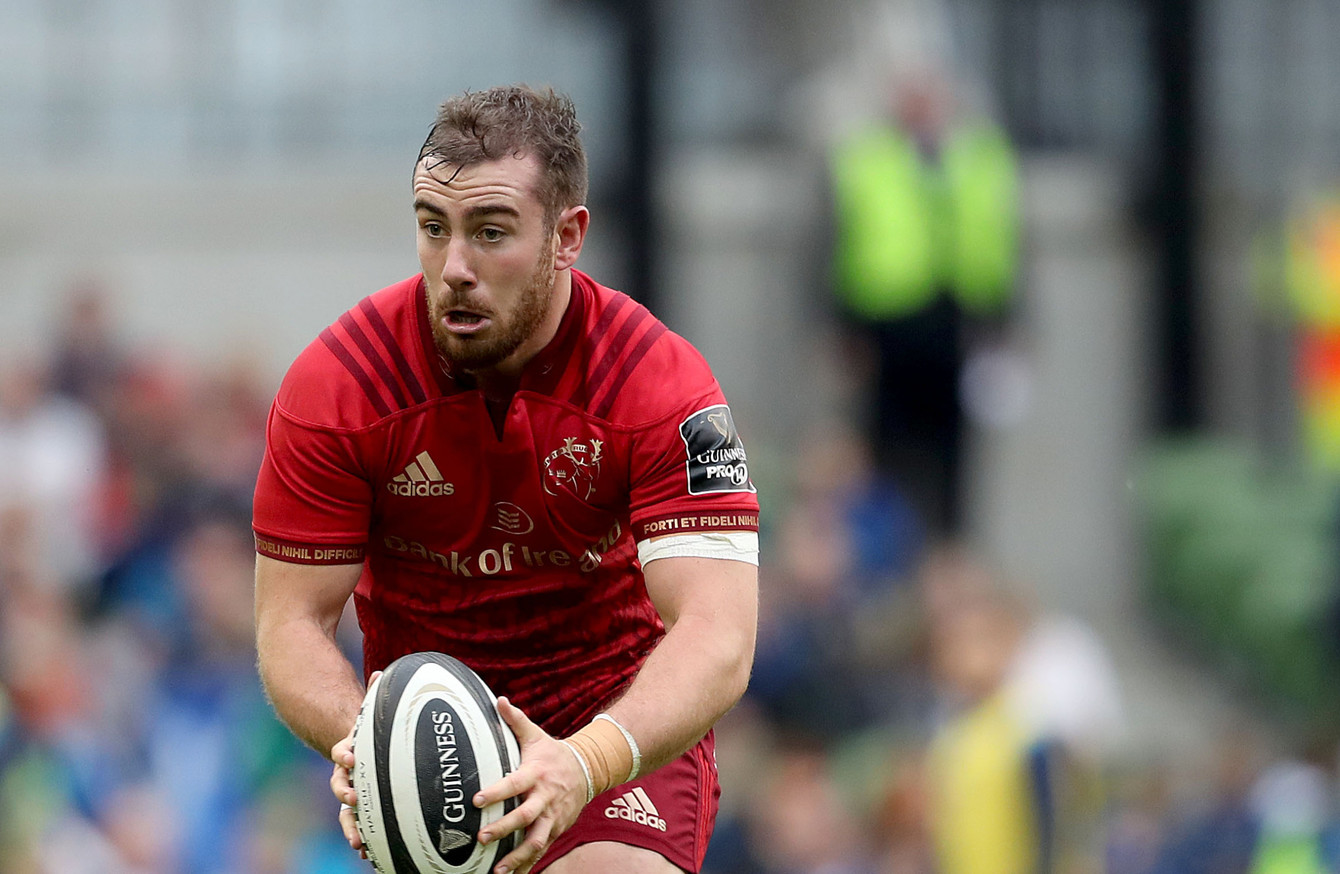 The big question awaiting Munster this weekend is whether or not our attack can crack Leinster’s defensive system.

Depending on who you ask, Munster are either developing an attacking game or are failing miserably to do so – usually the result of the weekend’s game dictates that narrative. As I’ve said again and again, building a rugby attack is usually a multi-season job depending on personnel and other game plan requirements.

I receive an email every other month stating how Joe Schmidt didn’t need multiple seasons to work Leinster into an attacking juggernaut but, as I copy and paste to them in reply, Joe Schmidt inherited a squad that had won the Heineken Cup two season’s prior and had multiple Lions, future Lions and test level animals in his squad with a dominating, elite-level flyhalf in Johnny Sexton who was coming into his prime years.

Not every coach has that kind of weaponry at his disposal on day one. Munster had attack patterns devised for this season – remember most of this work is planned in the summer and then tweaked as the season goes on – and a coach change mid-season can only do so much. You’ll see a small few tweaks here and there but nothing massive. That’s certainly true of Munster since the turn of the new year.

Munster’s patterns are evolving as much as they can evolve mid-season.

We saw some of this development at different points in the season but with Leinster on the horizon, I thought it might be best to focus on the last game – Edinburgh.

I’ve been through Munster’s kicking choices in that game – here and here – but there was some illustration of what Munster are looking to do from an attacking perspective with the ball in hand, too.

Let’s have a look.

Munster don’t really play with a strict forward formation but if I was to pin them to one, it would probably be 1-3-3-1. You can get an impression of it – the two pods of three in particular – on this sequence here;

This kind of structure isn’t rigidly stuck to, but I include it here as a rough guide to how Munster align in attack. In this example, there’s no wide “1” to release the ball to as the forward involved is on the other side of the pitch post-ruck, but you get an idea of Munster’s intention to have at least one forward attacking down the tramlines if at all possible. This “1” spot is where you’ll often see Chris Cloete, for example, but Munster have been making an effort to get CJ Stander into that position over the last few weeks as well using his passing ability to move the focus off his carrying lane – he had 6 passes against Edinburgh.

Most of Munster’s best effective work is done in constructing screen and pass options on big openside plays.

Have a look at this set up here;

Munster have 4 options on this play. A straight carry with two ruck support forwards already in situ, a pop pass from one forward to another to add an angle to the carry, a forward swivelling the ball around for Hanrahan or Murray finding Hanrahan directly from the ruck.

The key players here are Hanrahan and Scannell, as they have the passing range to give Munster a long range, no-ruck option on this play with Holland and Marshall acting as additional screen and support players.

We go for the tip-on option this time, but our wide play structure is still in place, and we’d use it for the next phase with the two forwards moving into the screen position thereafter.

The play breaks down due to Mata reading the screen but you can see Munster’s intention here – get the ball to Zebo and then Stander, who’s in a wide position that we haven’t really seen from him in the last few years. 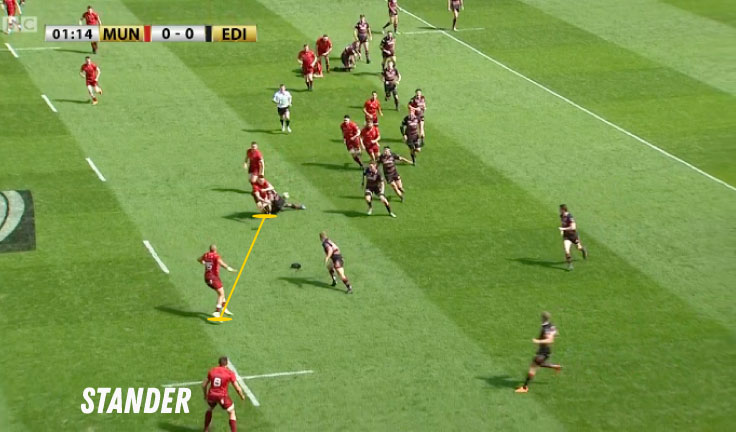 You can see how this plays out if Scannell gets a clean look at this pass – Zebo takes the ball, beats the blitzing man and then gets the ball to Stander with only outside backs to run at. That’s the ideal matchup for a guy with Stander’s power and pace, especially when we’ve seen how effective CJ can be when he’s got a bit of space to work with.

When people talk about upping the skill levels of tight five forwards, they’re really talking about the ability of forwards to spread possession effectively while also using the threat of their power as a means to “stick” defenders in place. Munster use this principle quite a bit when attacking a big openside. 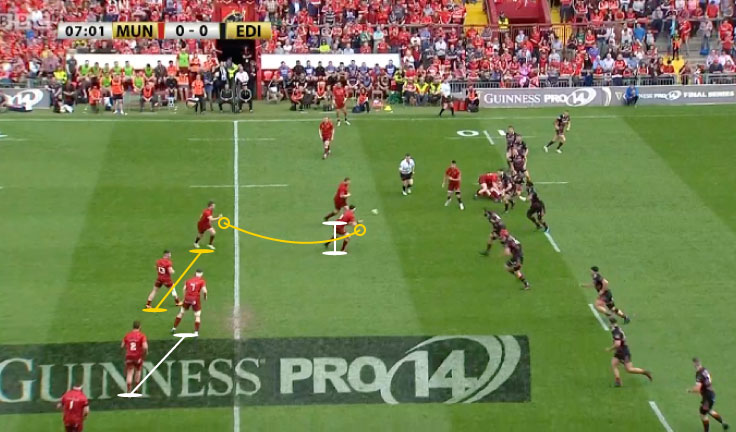 You can see the flyhalf options here. Holland takes the ball on the outside of the pod and can either carry up the middle or pop it out the back to Hanrahan, who can spread the ball wide or kick.

Now, Holland has to check his run in this instance and carry, but you can see the idea behind this structure and, when the ball comes back, the structure is still in place.

Hanrahan takes the kicking option on this subsequent phase – he noted Edinburgh’s wide numbers – but there was a structure to work with if he wanted. 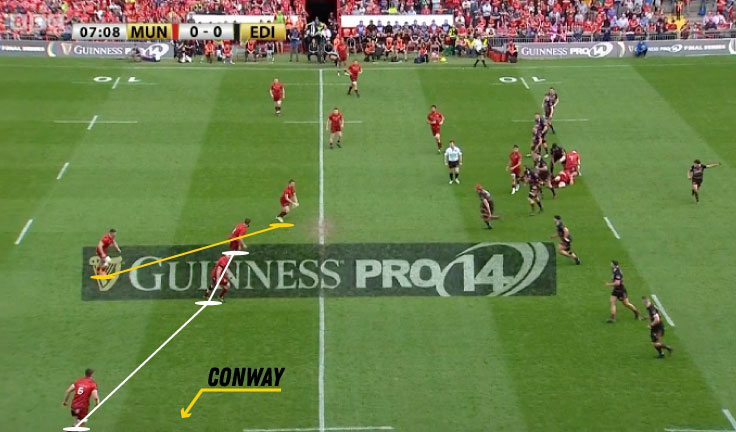 But if you want to see what Munster’s attacking pattern was really working towards here, we have to look at the guy who stunted his run after Holland checked. 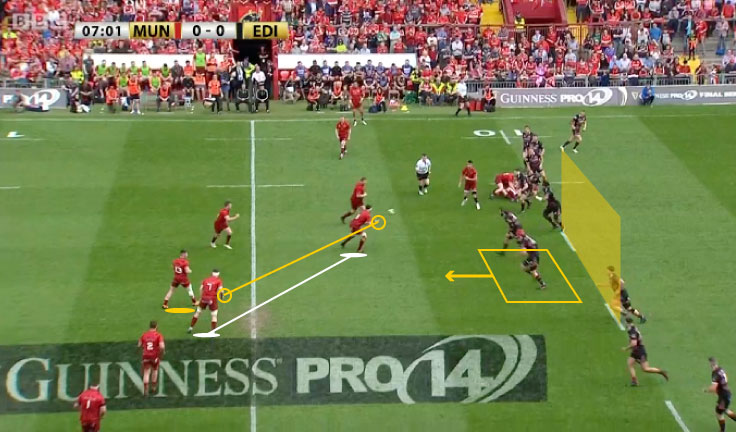 I think the play option here was Holland to O’Donoghue, with Holland drawing out a block of Edinburgh heavy defenders for O’Donoghue to attack at pace with Arnold on his shoulder. One phase, multiple options.

That’s why having more than one distributor is such an important part of Munster’s gameplan right now. Hanrahan, Scannell and Zebo alternate at first receiver to allow Munster to have multiple carry/screen options all the way across the pitch.

Here’s another failed example but that failure illustrates what Munster were trying to do; 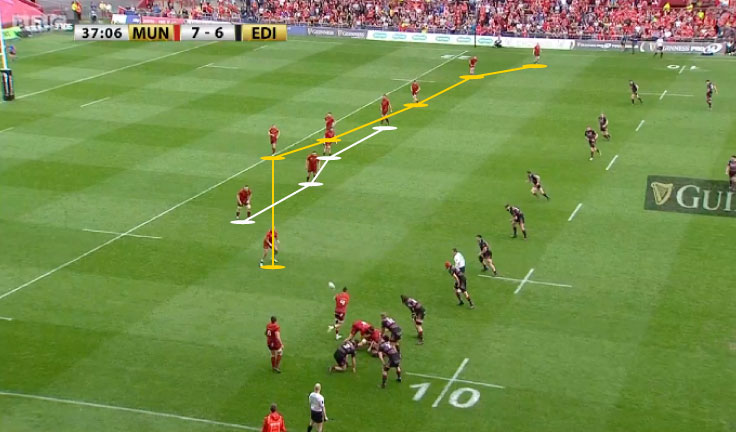 The four forwards across the middle of the pitch act as a magnet for the opposition midfield defence and, with retained possession off this phase, allows Munster’s backs (in yellow) to slide around the corner and overlap Edinburgh. Let’s play through what happened. 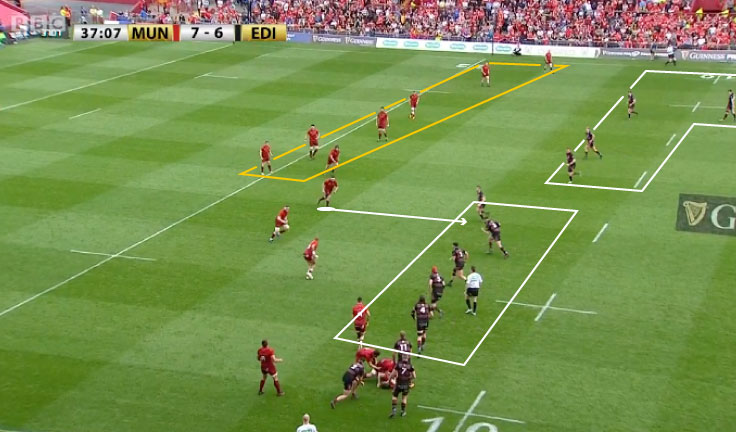 If Munster retained the ball here, Murray could slip the ball to Hanrahan running at Edinburgh from an angled position and with multiple options outside him but we couldn’t retain the ball in the pressure phase – that under-resourced centre field ruck that would have sprung the whole attack wide open.

We’ve become quite good at attacking on this style of play but the accuracy hasn’t been there. Even here, on turnover ball (that’s why Murray was on the touchline) we managed to generate an angle on the outside

This is the kind of spot where, ideally, you’d have a Chris Cloete coming onto the ball but O’Mahony got good traction nonetheless and had the ball not been spilt by Parker on the next phase, this had real potential to develop into something positive on the reverse.

Will this kind of structure be enough to worry Leinster? Yes – but only if it’s accompanied by an increase in the accuracy we saw against Edinburgh.