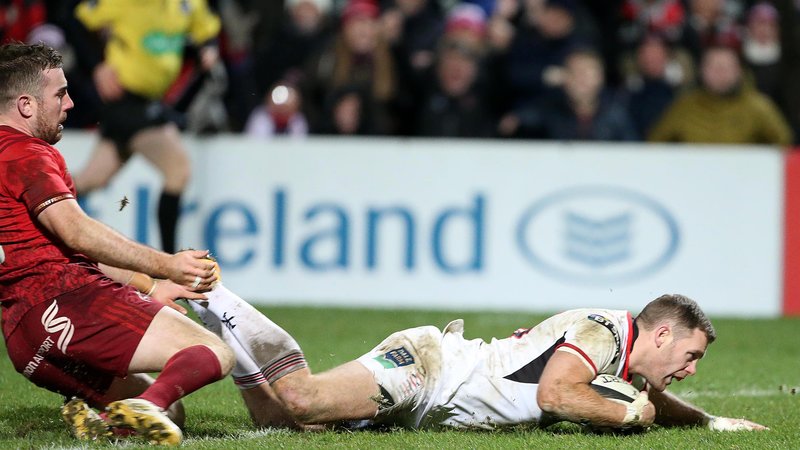 In a lot of ways, a professional rugby player has to have a goldfish memory to succeed.

The ability to forget performances like this might not be a bad superpower to have for a few lads this week. Failing that, they may be hoping some of the coaching staff have a memory loss episode of some description, given how badly things went in this game.

But before we get to that, let’s look at why they may be hoping for a case of coaching amnesia this week.

Throwing It All Away

Munster went in at half time 17-0 up after as good a half of rugby as I’ve seen from them this year. The forwards were eating Ulster alive at every scrum and maul to the point that every other setpiece looked like a potential Munster penalty. When Jack O’Donoghue split an Ulster 5m drive in half on 40 minutes, it looked like a case how much Munster would win this game by, not if they would win at all.
Yet just forty minutes later, Munster were standing under their own posts, a mere kick of the ball away from leaving Belfast with nothing. Cooney’s kick drifted wide, and Munster left with one bonus point instead of the five that they probably should have had.

So how did it happen?

To throw away a 17-0 lead in 40 minutes, you need a confluence of Terrible Events.

You could probably survive with a narrow win with one of those things but all four? Tough.

But we won’t pretend that these Terrible Events make Munster hostages to bad luck here. Losing Holland, Scannell and O’Donnell was bad luck, for sure, but the rest was all Munster’s own doing.

First things first, you can’t leave 7 points on the tee in any away game, regardless of how well the forwards are doing.

Munster lead 17-0 at the break but even then, you felt that those missed kicks would come back to haunt. At 24-0, or even 20-0, you’d feel that Ulster may have started to consider jacking it in ahead of Leinster this coming weekend but instead, there was a chink of light left open for them – however small.

What was needed was clinical, ruthless, relentless exits. Intelligent kicking. Discipline. What happened was the exact opposite.

From a tactical perspective, I’d have liked to see Munster kicking for territory and continuing to attack the Ulster throw. Ulster were getting wiped out there for most of the game – even during their revival – and a few booming exits beyond the 10m line or a few wiper kicks on an angle with a big challenge in the air to follow would have probably yielded positive results.
Munster needed accuracy and the old cliche of playing the game in the right areas of the pitch but couldn’t make it happen.
At that point, it was vital that Munster kept the crowd out of the game and the referee’s head but kicking errors, missed touches and a succession of silly penalties invited the Ulster men into the game and eventually lead to Fineen Wycherley taking a yellow for the team on 54 minutes.
Even then, that isn’t so bad.
At that point, Munster were still 17-0 up and just needed to up the kicking again – but into the stands, not the waiting hands of Charles Piutau, Craig Gilroy and Rob Lyttle. Ulster’s momentum was such that a try seemed inevitable and it eventually came through Darren Cave.
Again, that isn’t so bad. At least until Sam Arnold was red carded for a challenge in the build-up to that Cave try. Then it became very bad indeed.
17-10 with fourteen men for 10 minutes is doable. Managing that scoreline while down to 13 for six minutes and then 14 for 20 minutes is a much bigger challenge.
So it would prove. Ulster would score again three minutes later in the aftermath of another poor kick transition and from there, the Northern Province were rolling and the momentum kept coming until they took the lead on 73 minutes – a lead they would not relinquish.

A seemingly cast-iron win becomes a gutting loss in 40 short minutes. Not good. But that’s what next week is for.

You either win, or you learn and we’ve done a lot of learning the last two weeks.

I can’t really fault the starting pack’s performance. En masse, they were physical, accurate and dominant in the scrum and maul –  both in the opening 40 minutes and for large parts of the second half. All three of the tries came directly from the pressure they exerted on Ulster.

Fineen Wycherley, yellow card aside, came on and had a really good impact.

That performance, at least, bodes well.

The forward replacements were decent enough when they came on without excelling. Stephen Archer’s good scrummaging was almost ruined by two very dodgy maul interventions.

I thought Duncan Williams had an OK game too. Some of his passing was a bit wayward and his box kicking in the second half was far from perfect, but overall he was snappy enough at the pace and made decent decisions the most part.

Keith Earls, Calvin Nash, Alex Wootton, Simon Zebo and Stephen Fitzgerald were OK. As a mix and match combo, I thought they handled Ulster’s cracking back line relatively well while there were 15 men on the pitch.

Not great, by any means, but decent enough.

Look – these lads just had bad games, there’s no other way to put it.

Sam Arnold had a decent game up until his red card, bar missing a tackle on Cave for Ulster’s first score but it was what happened beforehand was the killer. Arnold’s tackle on Leali’ifano was a yellow at least, a red at the ref’s discretion but fairly needless in the context of that moment.

That tackle gave the referee a decision to make and it was incredibly, incredibly costly.

He’ll know that, though. Arnold’s a young guy and just after five heavy games in a row so we can forgive a rush of blood to the head against his former club.

As for JJ Hanrahan – big chances come with big consequences.

I said pre-game that this 80 minutes would be a real opportunity for JJ to put a marker down as the season turns towards the business end but it ended it being a poor display. Forget about the missed penalty and two missed conversions – they happen – my problem with this performance was the unforced tactical errors, attacking misreads, poor exits and missed touches.

At times, he seemed to be trying too hard to make an impression and in doing so, made high-risk decisions (like a solo kick chase while down to 13 men) instead of the low percentage options required.

As learning experiences go, this will be a tough one but nights like these can be valuable.

I’ll be reviewing all this game’s action and technicalities on TRK Premium this week. It won’t be fun but hopefully it’s illuminating.