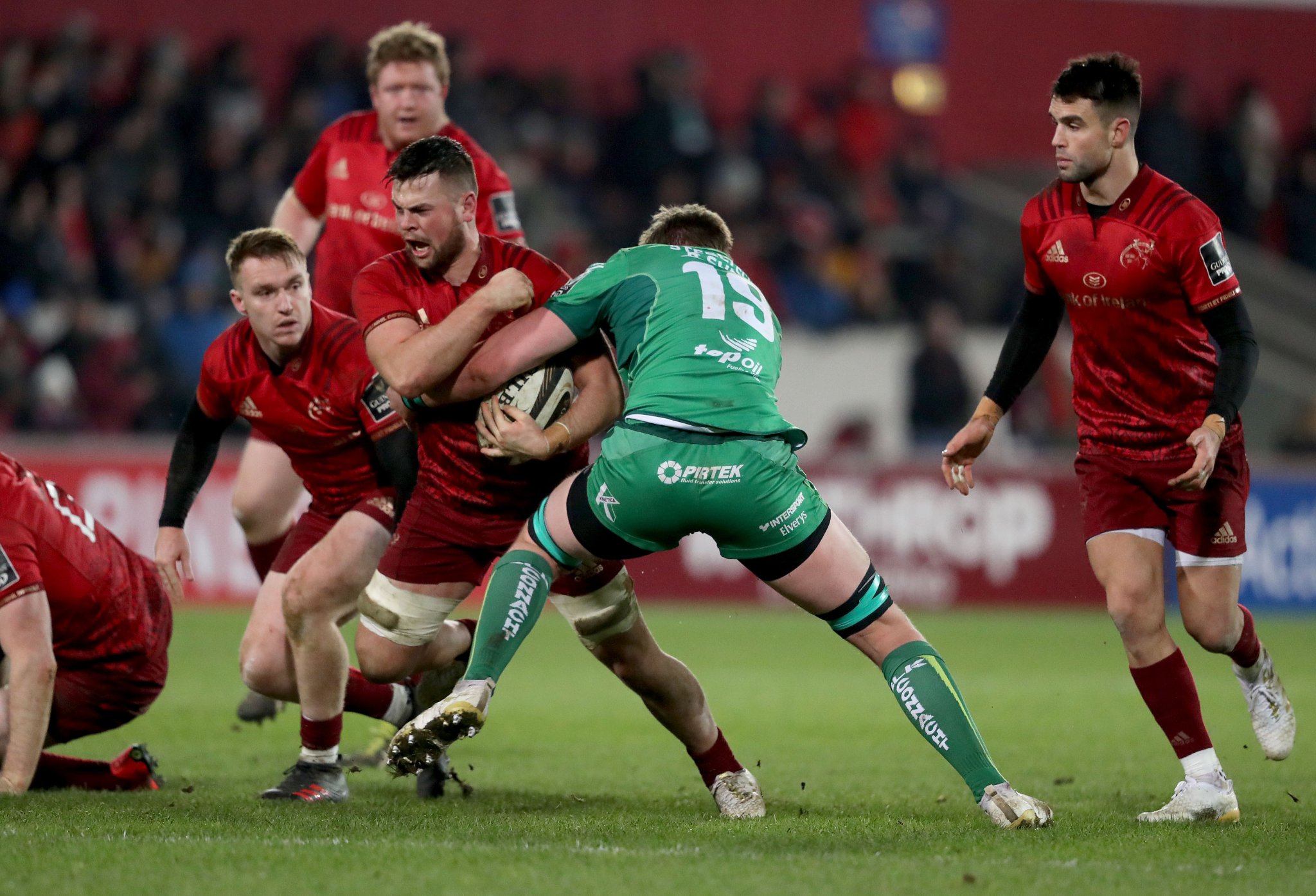 It was far from perfect when you factor in the bitty first half but you can’t complain about the end result; a 5-0 match point win puts Munster well clear of Connacht and Cardiff in the hunt for PRO14 playoff spots. Combine that with a loss for the Cheetahs away in Treviso and it all adds up to a superb weekend for Munster in Conference A.

This win puts Munster 13 points clear of the Cheetahs, 19 points clear of Cardiff and 20 points away from Connacht with only eight regular season games remaining. Barring a Six Nations Test Window collapse against the likes of Zebre, Cardiff and Edinburgh, Munster are all but guaranteed a quarterfinal spot and that can only be a good thing for the squad as they kick up a few gears ahead of a daunting trip to Racing 92 in the Champions Cup.

The first half had some good elements – far from the lows of the halves we saw against Leinster and Ulster – but it was undone by the kind of indiscipline of week’s gone by. Munster conceded 8 penalties inside the first 40 minutes and that really killed any momentum they were looking to build. Some of those penalties came in the scrum, where a fitful refereeing performance from David Wilkinson turned the scrum into an old-fashioned lottery for both sides. When Connacht had the put in, they won a penalty off the boring in of their tighthead Carey on Kilcoyne. When Munster had the put in, it was the reverse.

It added up to a stop-start game which put a high premium conservative handling as the risk of a straight arm penalty from the resulting scrummage was too great. That narrowed the passing games of both sides in the first 40 and added to the start-stop, bitty nature of the first half contest.

Some of the other penalties were fairly avoidable – a kick out of the ruck, a high shot, a harsh enough deliberate knock penalty and a holding on penalty moved forward 10m for backchatting – but they gave Connacht an early foothold in the contest that would keep them well in contention until the tail end of the third quarter. Munster’s second-half start was good without being spectacular but it marked a real uptick in physicality that began to take a toll on the Connacht heavy defence. Connacht’s up and down time started to increase after every Munster carry and with that came space and penalties. Munster were winning collisions, getting decisions and began to tighten their grip on the game until Connacht finally broke.

The tail end of the third quarter saw Munster sticking three converted tries inside a 10-minute spell that ended the game as a live contest. By the time Conor Murray burrowed over for his second try and Munster’s fifth, it was cotton wool time but that shouldn’t take away from the impressive nature of the win in the end.

Once Munster got out of their own way, the win came easily enough in the end and we managed it without giving too much away ahead of next week.

But I got the impression that this wasn’t the only game Munster were playing here. Racing 92 seemed to be looming large over this contest. The situational pressures of the InterPro series to date meant that Munster had to pick a side with a little more first string guys than perhaps they would have liked ahead of the Racing 92 game. That seemed to affect some of Munster’s work in the lineout. Up until this game, Munster’s lineout work had been characterised by a lot of movement and ingenuity in their maul setups but that all disappeared for this game. It meant that a lot of Munster’s lineout ball wasn’t really turned into good mauling situations but that’s mostly down to not wanting to give Racing 92 too much to look at ahead of next week’s game. That game is going to be dominated by the set-piece battle and Munster definitely kept a lot under wraps in this game.

But we can’t get carried away, and I doubt anyone is. Beating this version of Connacht in Thomond Park isn’t on the same planet as going to Paris to face Racing 92. This Interpro series will have taught a number of lessons but they’ll only count if they’re learned. It hasn’t been a great holiday period but we saw last year that there are no trophies handed out for being Winter champions.

Onto Paris, and bigger beasts.

Dave Kilcoyne, Stephen Archer and John Ryan didn’t have outstanding games but they managed the scrum lottery as well as they could.

Rhys Marshall looked quite good on his first game back post-concussion without blowing anyone away.

Mike Sherry looked decent when he came on and looked pretty solid in the set piece.

Bill Johnston had a nice little cameo too – sharp passing, brave tackling and some nice ideas with the ball in hand.

Jean Kleyn, Darren O’Shea and Jack O’Donoghue spent most of their Saturday night buried in heavy, tight work but came out the other side with some key victories on maul defence in particular. All three rucked quite well, especially in the second-half. Darren O’Shea, in particular, impressed me.

James Cronin was close to man of the match for me. He scrummaged incredibly well, carried intelligently and hit rucks like a serial killer. That made sense in my head but damn, he was good here.

CJ Stander had a quiet first 40 minutes but what impressed me was the consistency of his carrying – he trucks the ball up with the same intensity and quality in the 70th minute as he does in the 10th – and that durability makes him grow into every game he plays. Quality.

Conor Murray scored two tries that a back row would be proud of, while also displaying his effortless range of passing and defending like a midfielder. This guy is unreal.

Ian Keatley ran this game fantastically. He just made the right decision, almost every time. His exits were rock solid, he kicked the goals he needed to and he had a key hand in three tries. Keatley is calmness and maturity personified right now.

I thought Andrew Conway had a really sharp game. He scored one try, made another and chased everything. I’m loving his spiky attitude, too.

Rory Scannell had a poor enough opening 30 minutes discipline wise – three avoidable penalties – but he more than made up for that with a bruising performance on both sides of the ball. He just keeps showing up for work in defence, wins attacking collisions and can still stick a ball in the corner for you with that dinger of a left foot. Excellent.

Chris Farrell slotted back in post-injury with the same performance quality that he showed in green before his injury. He’s an extremely dangerous man on the ball and his carry in the build-up to Darren O’Shea’s try was outstanding.

Keith Earls was the Moyross Express personified in this game and looked borderline unplayable with the ball in hand at times. Get him the ball in space and he will score tries – as this game showed. The real quality of the man was on show here; just ask Quinn Roux. I’m sure if Keith Earls wanted his fellow international Quinn Roux to get a red card for his reckless, dangerous tip tackle in the second half, he could have stayed on the deck, got the physio on and made a meal of it. That’s not Keith Earls, though. Instead, he popped back up to his feet ASAP and probably saved the Connacht second row from a red he probably deserved. If anyone ever asks “who’s the man?” in your earshot, it’s your duty to tell them “Keith Earls”.

Conor Oliver injured his shoulder in pre-season and fairly badly at that. It was a pity – everyone you spoke to reported how he was tearing it up in training to that point. That injury meant that this game was his first of the season and you’d expect him to take it easy. Not a chance with this guy; he ended up as Munster’s top tackler.

This was a high energy performance of huge quality from Oliver. He tackled, he carried and he stepped in as halfback to set up O’Shea’s try. Superb stuff.

I’ll have a tonne of Video and GIF analysis of this game on TRK Premium this week, as well as the usual Premium Podcasts and other content.