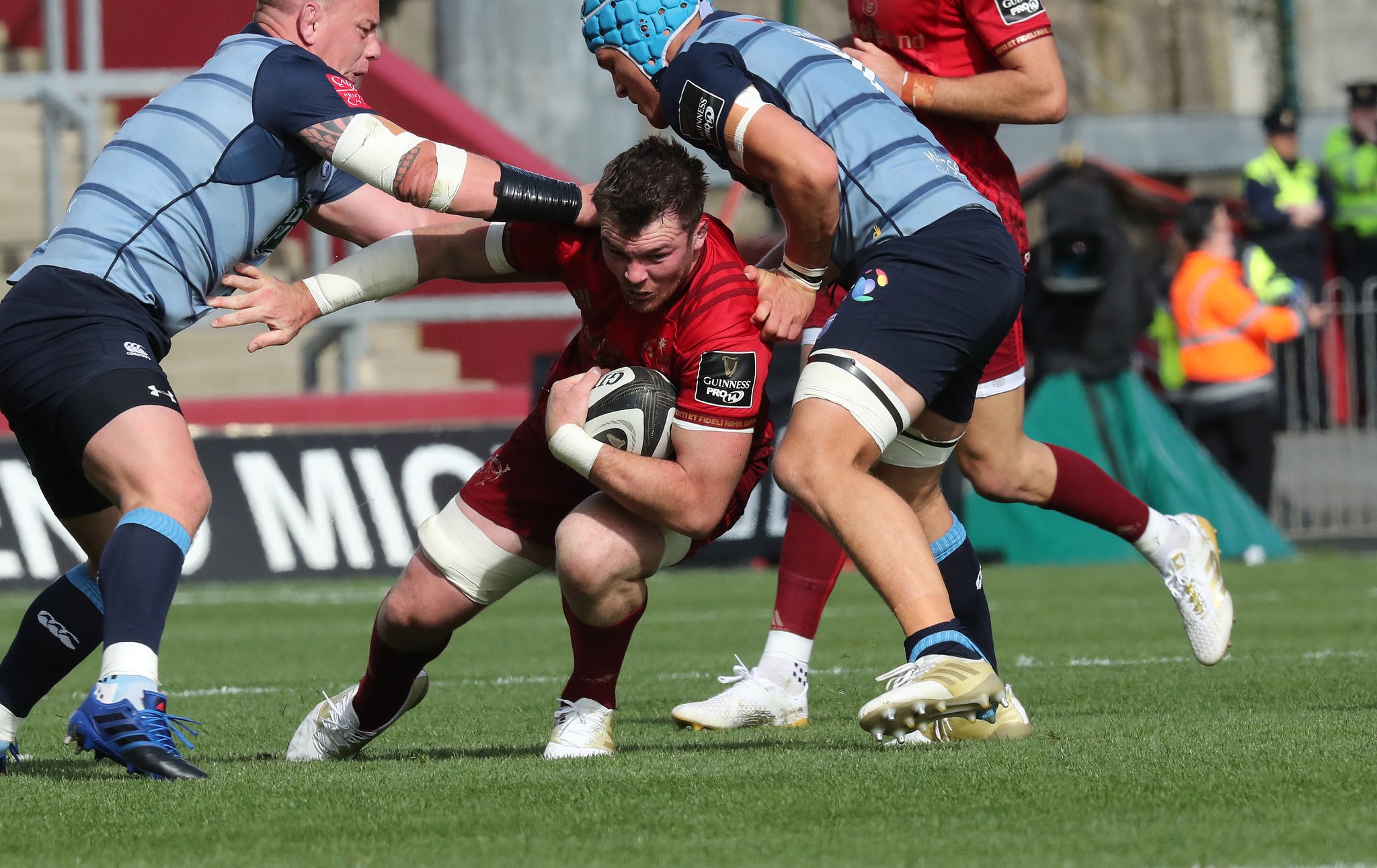 “We were beaten up last week in Glasgow. [The coaches] during the week – they questioned whether we wanted it.”

Those were the words of Man of the Match Ian Keatley at pitchside post match. Those interviews are usually fairly bland affairs but occasionally they can provide some valuable insight into the preparation for a game like this. Today, it delivered. And it wasn’t the only thing that delivered.

That was the question posed to Munster pre-game by the coaching staff and eventually they answered with a fairly resounding “yes”. I say “eventually” here because it took Munster 40 minutes to get to grips with referee Quinton Immelman’s breakdown interpretation and, almost more importantly, get a handle on an enthusiastic Cardiff side that took a deserved 3 point lead into the sheds at half time.

Up until half time, Munster were disjointed, rusty and a little muddled. In a way, this was to be expected as this was the first time most of the combinations on display here had started a game with each other since last season but it lead to an iffy first 40 minutes, to say the least.

It wasn’t all bad – we showed some lovely work on turnover ball that was only missing the last pass at times and a few lovely touches from the outstanding Ian Keatley – but for the most part we looked like a side that was still getting to grips with our expanded game plan and the different ruck resourcing it requires.

I know that sounds a bit dorky but it’s true. An expanded game plan means that your rucks are going to be a little further apart then normal and if you’re still getting used to the pattern, you can find yourself a step or two off the pace in a game environment. That certainly looked to be the case in the first half and we turned over a few balls that we’ll be unhappy with on review (I’ll cover this in the GIF Room this week).

Our defence, too, looked a little misaligned and we ceded a few wide linebreaks that owed more blame to the packed nature of our A/B/C ruck defence than the guys defending the outside channels, who were getting it in the neck on Sky Sports. We were very tight around the fringes and that, for me, owes more to new combinations more than anything else.

Confident, familiar defences leave that bit of extra space that you need to defend at an elite level. Sure, these guys train with each other every day but the demands of a game are different. In that kind of tense scenario, you often see teams clustering a little closer together than normal and we certainly showed that here.

On the positive side of the ledger, we slowed down Cardiff quite well at the ruck at times and put in some excellent hits. Those excellent hits were somewhat mitigated by some pretty reckless shooting in defence on second touch movements, which would surely be punished much more harshly against the opposition we’ll be facing over the next few weeks.

The first half left us with some questions to answer and it was satisfying from a technical perspective to see our approach change up a little in the second half. We came out looking for trouble, and immediately set about grinding the Cardiff scrum into submission over a period of 10 minutes of pressure. In that set we won a yellow card but nothing else after a frustratingly soft free kick awarded by Immelman lifted a scrummaging siege that lasted 10 minutes and won 4 penalties.

It was a big moment from a mental POV – would it break Munster’s resolve? Would that frustration lead to a limp third and fourth quarter? Basically, did we want it? The answer was a resounding “yes” and from that point Munster tore into the Blues with renewed piss, vinegar, fire and brimstone.

All of a sudden, Munster were vaporising rucks, melting Cardiff in the tackle and putting the ball through the hands with pace and accuracy. Cardiff would have no answer and before long, the bonus point would drop into our lap with minimum fuss.

Munster saw out the game with little in the way of resistance. Even a late surge by the Blues was met with the kind of defiance you’d expect if we were defending a 2 point lead. The tackles kept coming, as did hugely effective maul defence embodied by a massive shunt in the last 2 minutes.

Did we want it? You tell me.

A bonus point, 5 tries and a healthy 23 point margin of victory is a fair reflection of the game, such was the power on show in the second half. It wasn’t perfect by any means but it was enough on the day. Cardiff were game, brave and showed good energy before gassing out. Tough times await for them but I saw some good things from them today, and hopefully they push on. This league needs a strong Cardiff side.

As for Munster, bigger challenges await, of course, but we’re not far off where we need to be. Let’s get down to business.

Williams, Flanagan, McCarthy, Taute and O’Connor not rated due to not enough time on the pitch.

A decent outing for these lads; here are the standouts.

Robin Copeland had a very decent game. He was out of position but gave everything he had in the scrum and showed up well around the pitch. Some of his lineout work and bracing in the maul wasn’t top class – if I was being picky – but those are specialist traits that it’s unfair to expect him to have in a week. Deserved his try.

Alex Wootton, Andrew Conway and Darren Sweetnam had a fairly good day out too. Some of their kick positioning could have been better but they grew into the game as it went on.

Rory Scannell mixed the good with the bad here. One rash shoot in defence and a blown pass to put Sweetnam over blotted his copybook slightly but he made up for it with a beautiful line and offload for Hanrahan’s try and by vaporising lads in the tackles he did make.

Tommy O’Donnell just worked himself into the ground. A hard nosed grafter and team man. He went to the well again today and topped our tackle charts. A selfless performance.

I thought Niall Scannell, Dave Kilcoyne and John Ryan had a very effective day on the front lines. They powered the Cardiff scrum and were efficient around the pitch. They really upped the power in the second half. Encouraging signs from our international front row as he head into the Champions Cup.

Billy Holland, too, had a great game. He worked hard in defence, did trojan work in the lineout but really impressed with his passing, handling and ability to keep the tempo of the ball going when it hit him. A good day out for Holland.

Peter O’Mahony and CJ Stander got right into this game after a slow start and showed their quality as the game wore on. Stander’s carrying was relentless and he made more and more ground as Cardiff tired. O’Mahony worked the lineout, threatened on the Cardiff throw and hit rucks all day long – he’s the King of the Dirty Work.

Conor Murray mixed the elite with the average in this one – so it’s a good job his “average” is better than most scrumhalves best. He just eased his way into this game with the kind of assurance that you get when you’re one of the best players in your position on the planet. He scored an excellent try and his work in setting up the two killer scores was elite as they come.

Chris Farrell came on a little earlier than planned due to Jaco Taute’s unfortunate injury and he really impressed me. Power, pace and some excellent flat, pacey passing were the highlight on a day when we needed some attacking impetus. His powers will only grow as he beds in with those around him – defensively and offensively.

A lot of that second half energy I spoke about earlier was provided by the electric JJ Hanrahan who was an absolute nightmare for the Blues on his return to Thomond Park. He came off the bench like a man with a point to prove and attacked from the second layer, created space off both sides, and pierced the gainline with a pace and step that is just plain exciting to watch. His two tries were just dreamland stuff. Ask yourself, What Would JJ Do? The answer – score two tries on your second Munster debut. TASTY.

All this would have been much more difficult without the absolute excellence of Ian Keatley. Rock solid off the tee, a constant danger with ball in hand, a surgeon with his tactical kicking and a real Commodore on the pitch when we needed one. But this isn’t anything unusual for Keatley over the last year. Since his last really poor game for Munster – ironically against Cardiff a year ago in this very fixture – Keatley has been consistently good for Munster and his early season performances so far this season hint at a guy who’s got a lot left to give in a red shirt. He was the standout player today and made a serious case for the first rate #10 shirt going forward. Outstanding performance.

For TRK Patrons, I’ll be looking at a lot of the technical details of this game in The GIF Room this coming week, as well as previewing the BIG ONE in the Aviva on Saturday all week. The schedule for the week’s Premium content is here.

If you’re not a premium member, you can gain access to all my TRK Premium content for as little as $2 a month on my Patreon page here.