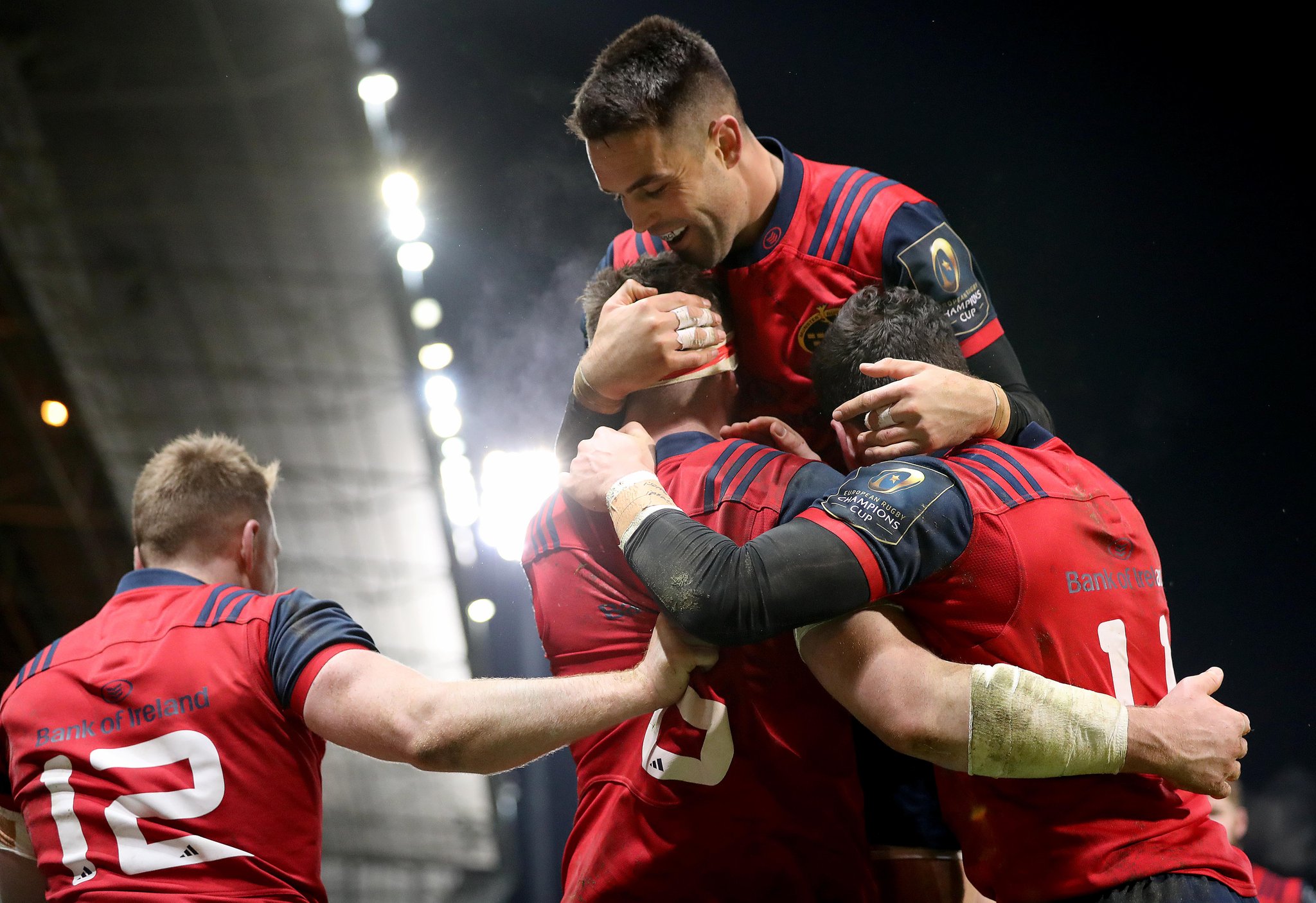 One moment summed up Munster’s approach to this game.

It wasn’t Simon Zebo’s excellently taken try straight from the video analysis room. It wasn’t Munster’s vicious work at the breakdown. It wasn’t even the Tigers settling for 3 points when they were already 20 points down.

It was the seemingly futile defence of the try line in the last five minutes.

At that point, Munster were home and hosed with a bonus point in the bag and Leicester were camped on the home side’s 5m line. No one would have held a late try for Tigers against them. Maybe the maul defence would be tough but, you know, let’s just get the try out of the way and get in the sheds.

Not this Munster side. Not in this game.

Munster defended their line as if this was a 3 point game, not a 23 point game. They infringed. They hit. They slowed down the ball. They scratched, they clawed and, in the end, they repelled the Tigers for the finish.

That was a little statement, squad-to-squad, that said that Munster were well aware that this was only half a job done.

It might not have been the 38-0 scoreline of last season but, in a lot of ways, this win was all the more impressive.

Munster shut down Leicester in the tight exchanges, followed Ford around the pitch with bad intentions and, crucially, absolutely vaporised the Tigers at the breakdown.

The pressure came from a few factors but mainly from Munster’s dominance of the gain line around the fringes and then, as a consequence, in midfield. That collision dominance allowed Munster to target the Leicester carriers over the ball, slow down their ruck and then blitz hard into Ford, Tait and Smith to excellent effect.

If Kleyn, Marshall and Stander were real dangers over the Tigers ball, O’Mahony and Cloete were more lethal than drinking an ebola smoothie.

That breakdown pressure forced the Tigers deeper, slowed their tempo and exposed Ford to serious pressure from Scannell and Arnold, who hunted him down all game.

In attack, Munster were able to use their width and forward handling to pressurise the Tiger’s wide defence, force them to realign in bad combinations and, in doing so, exposed their forwards to an awful lot of extra work.

Tigers had 51% possession in this game, carried the ball 105 times (just 7 times less than Munster) but were forced to tackle a combined 71 times. Munster’s pack made 50 total tackles on 49% overall possession – 21 less than Tigers.

Munster’s midfield duo of Scannell and Arnold made a combined 26 tackles. Leicester’s combination of Tait and Smith made 10 tackles – six for Smith and four for Tait. I wrote about Leicester cycling Tait out of the heavy channels pre-game, and his tackle count certainly backs that up. The big losers here were the Tigers pack who, in a 12 man line, went through an awful lot of extra work that aided Munster’s game plan.

When we needed width from our forwards, we got it and with that handling, we found Tigers outside edge at key times. Peter O’Mahony’s try was a key example of this; Cloete passed to Kleyn, who passed out the back to Keatley.

That side of Munster’s game is seriously overlooked. Munster’s pack passed 25 times with the likes of Holland, Kleyn, Stander and Cloete putting serious width on the pass. That width played a huge part in this dominant win.

The results from earlier in the day had meant a Munster win would be substantially more valuable than it was on Friday. A bonus point win was even better and it left Munster on 11 points – five points ahead of Racing and Leicester. Castres win against Racing in Castres mean they sit in second place and, all of a sudden, the draw there in round one doesn’t look as bad.

A win next week – something that Munster will be targeting off the back of last season’s lessons – would put Munster into a commanding position in this pool.

In fact, I think the mirroring of last season’s result will, in a lot of ways, help focus minds in the Munster camp ahead of a trip to Welford Road. Last season, we didn’t perform in the second leg of this series and these Tigers have shown that bad results like this motivate them to show up at home. Munster will have to go out and prove that they’re ready to advance on the foundations of last season.

Tigers weren’t great here, but they were made to look it by a Munster side that hit a groove we haven’t seen since this time last season.

We know that you nothing gets won in December, but you can lose plenty. This week was a real statement but it was half of one. A win next week would be the kind of signal the whole of Europe will see.

But wounded Tigers are dangerous, as we well know. Last year, we had the killing shot in sight but our hand wavered in the last minute; let’s see if we can finish the job this year.

As per usual, players are rated based on their time on the pitch (no rating if on less than 15 minutes bar extraordinary circumstances), if they were playing notably out of position, and on the overall curve of the team performance. Jack O’Donoghue, Kevin O’Byrne Duncan Williams and JJ Hanrahan were not rated due to less than 15 minutes on the pitch.

The baseline rating for this game is Three Crowns for everyone.

You don’t put a dominant, powerful 33-10 beating on the Leicester Tigers without your entire team performing incredibly well. Here are a few of the notable performers;

The inclusion of Stephen Archer pre-game ahead of John Ryan raised the usual eyebrows but this guy has become adept at pulling those eyebrows down this season. This was another great performance from the tighthead. Excellent in the scrum, a rock in defence and put in some really powerful cleanouts.

Dave Kilcoyne had a good game too. He was his usual physical self on the ball and scrummaged quite well. He’ll be a little bummed at the pass he didn’t give to Zebo on his break but other than that, all good for Killer.

Brian Scott and John Ryan came on and kept up the forward pressure really well.

Jean Kleyn and Billy Holland looked the perfect mix of power and grit. Kleyn was a powerhouse in everything he did and was a behemoth for Munster all over the pitch. He was desperately unlucky not to touch down at the start of the second half after making ground he had no right to from 5m out in the heaviest of heavy traffic. An animal.

Holland wasn’t as visibly prominent as his second-row partner but I guarantee when you watch this game back, you’ll see Billy near the top of the attacking ruck charts as well as spreading the ball 8 separate times. Mr Dirty Work does it again.

Darren O’Shea‘s cameo off the bench was quite good, I thought. He showed up well in defence, scrummaged well and defended Leicester’s maul extremely well.

Alex Wootton didn’t get his name on the scoresheet but he’s fast turning into a guy that sends jolts of electricity through the crowd when he gets his hands on the ball. He ran some powerful lines today and looked like a guy constantly capable of breaking the line. More than up to this level, to say the very least.

Andrew Conway had a very good game prior to his head injury and hopefully, he’s not too shaken up by it. Prior to that, he looked very sharp. Dangerous under the high ball and always capable of a break.

Darren Sweetnam came on and kept up the high standards – his assist for O’Mahony is the example of the unselfish player he’s turning into.

Simon Zebo looked like a player that has energy coursing him through him once again. He made some lovely breaks, was rock solid on kick return and took his try with all the magic dust you’d expect from the man. He’ll be missed around here, that’s for sure.

Rory Scannell and Sam Arnold had stand out games here. You really do have to check Wikipedia to confirm that, yes, these lads are 23 and 21 years old respectively. Scannell absolutely battered the Tiger’s midfield on multiple occasions on both sides of the ball.

The same can be said for Arnold, who looked like a guy on his 20th or 30th European appearance, not his second ever European start. Arnold annihilated almost everything that came down his channel in defence and put in some bone shuddering carries of his own. Seriously impressive.

Conor Murray and Ian Keatley were coolness personified. Flawless exits, excellent kicking and making the exact correct decision at every juncture was the difference between the two pairs of half backs.

Keatley’s moment on 73 minutes was a player coming full circle. Every inch the #1 flyhalf at the province, and it’s not even close at the moment.

Murray is a different class. He wasn’t even all that excellent today – it’s just that his “decent” is better than every other scrumhalf in the world not named Aaron Smith. Don’t believe me? I’ll sign a sawn afterdavided to that effect.

Rhys Marshall had the kind of game that would make you forget that, a few weeks back, he was the impact hooker. He might yet be again but what a player we have here – he was the outstanding front row forward on the pitch by a mile.

Peter O’Mahony and CJ Stander looked every inch of what they are; elite, world-class players. Stander just bullied his way through a mountain of carries and tied up two defenders every time. O’Mahony did what O’Mahony does – chewing through all the work that players love him for. His try was a perfect riposte to the week we all just put down.

Get both men signed up.

It’s your first game in the Champions Cup. You’ve already played a full season of Super Rugby and travelled all over the Southern Hemisphere before moving north to Munster and bossing all four games you’ve started.

This guy is the real deal.

He was outstanding here. I’ve watched the game back a second and third time now and he was everywhere. He was tracking their ruck ball, attacking it, harrying their carriers and pillars and still ended up being our top forward tackler as the stats currently stand at 3 am on Sunday morning.

Throw in three clean rips, a steal on the floor, some outstanding passing from halfback, a killer choke tackle with O’Mahony and a mauled try that showed off all of his power and dexterity and you have a performance worthy of the biggest stage.

He was, quite simply, everything I thought he could be in this game and more.

Welcome to the Gun Show, baby.

Join me on TRK Premium this week for detailed analysis of Munster’s Breakdown Warzone, how we videoed Leicester to death, how we used Leicester’s midfield weakness to stretch their defensive system to breaking point and the usual premium podcasts looking at Munster’s game in detail.