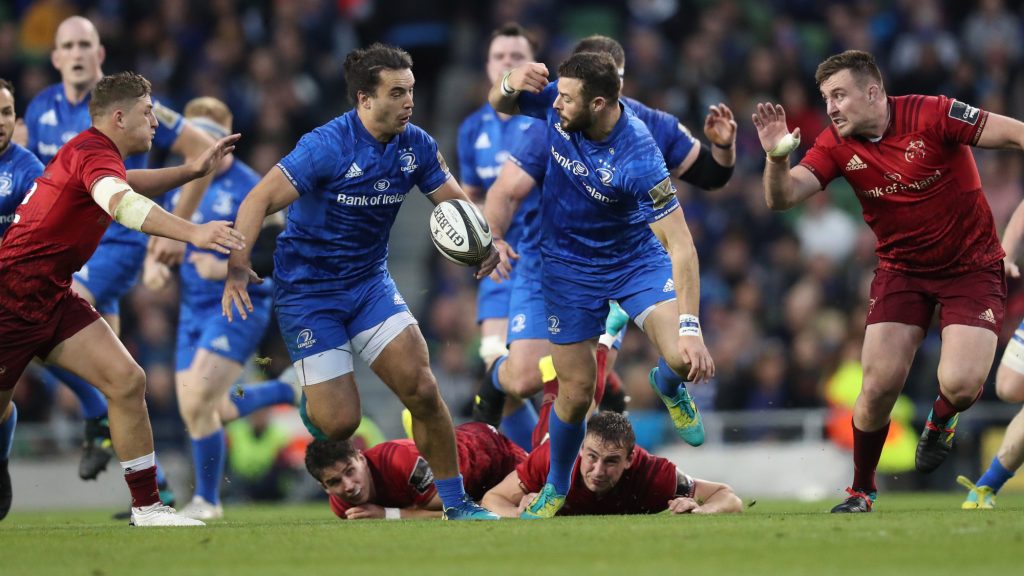 We can’t talk about this game without first talking about Ben Whitehouse Jnr and his team.

The penalty count was fairly even on the night – mainly courtesy of one 5m offside penalty and then four subsequent scrum penalties in succession under the Leinster posts in the second half – but most of the big moments in the game were based off contentious penalty decisions.

First, there was this one;

The touch judge called this a deliberate knock-on which was then confirmed by Mr Whitehouse Jnr. We can debate over whether or not Arnold even touched the ball and, if he did, whether Earls handling of the ball constitutes a penalty or whether Arnold’s supposed contact merely makes it a scrum for Leinster rather than a penalty.

But it was called as a deliberate knock-on, something on which I share CJ’s scepticism. 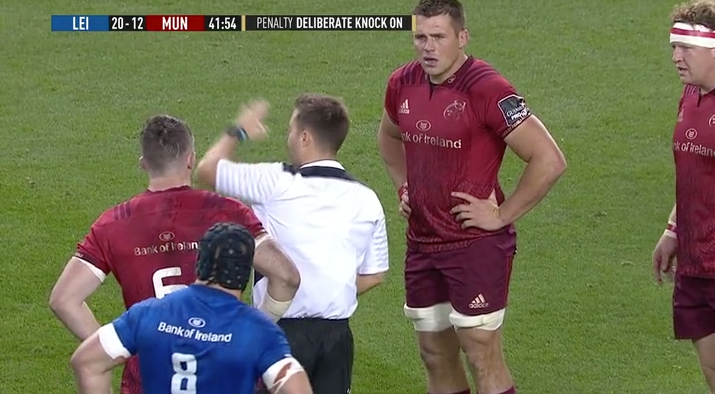 When errors like this happen, players lose confidence that a referee is being even-handed with his application of decisions and you have got a recipe for discontent. It isn’t corruption – as I had suggested to me multiple times last night – it’s just the pressure of a big occasion.

As I said though, the biggest issue was consistency.

I actually agree with the initial penalty try decision earlier in the game but just wish that the harsh interpretation here was applied later in the game.

Personally, I’m not that sure that the ball was heading to Lowe in this instance but Earls’ contact is marginally early for sure. A big strong lad like James Lowe seemed to go down awful quickly here but the impact from Earls must have been something else. That motion sold the penalty try to the TMO and referee, Earls went to the bin and Leinster went seven points up. Fair enough.

In my opinion, Munster’s four penalties under the posts in the second half should have earned the same reward of an instant seven-pointer and a yellow card. Even the last one right before Mathewson’s try was a little unusual in its application of the law by Mr Whitehouse Jnr.

When the scrum is stationary and the ball has been available at the back of the scrum for three-five seconds, the referee calls “use it”. The team must then play the ball out of the scrum immediately. Sanction: Scrum.

Barely two seconds compared to three to five when, right as he called “use it” Munster surged forward for another probable penalty? It’s the little things in a game as intense as this. This scrum develops to another penalty and surely a Leinster card and a penalty try would have followed. That creates a very different last 10 minutes. A small decision here, a small decision there, and things get a little unbalanced.

Instead, Munster conceded a silly penalty directly from the restart that undid a lot of the work of the previous seven minutes.

No complaints here. We’d got away with one previously but Archer made a tired man’s block and was rightfully pinged for it. It’s hard to dump too hard on Archer though – he was 68 minutes into a mammoth shift against Healy and McGrath in the scrum and directly after four massive efforts under Leinster’s posts.

That penalty, converted by the nerveless Ross Byrne, stretched Leinster out to an eight-point lead that they would not surrender.

I’ve spent a lot of time talking about Ben Whitehouse Jnr here because I’ve been inundated with messages about his performance in the aftermath of this game. They were extremely contentious decisions and helped decide the course of the game. In some areas, I definitely think he was mistaken – including Peter O’Mahony’s illegal scrum-binding on Archer.

But does this mean that Munster were robbed?

Of a losing bonus point, perhaps, but overall Leinster deserved the win here. I know that Leinster fans who decided to hate-read up to this point will be somewhat surprised at that but Whitehouse and his crew’s poor performance ≠ Leinster being fortuitous winners. Some of Whitehouse’s decision making gifted them position, yes, but they then converted those positions into points – almost everytime. Who’s to say that, under a different referee, Leinster wouldn’t have created similar chances without the unbalanced refereeing we saw here? It’s a testament to the efficiency that runs through their squad deep into the depth chart.

We expect dodgy refereeing in the PRO14 at this stage, especially away from home, but you just hope that the bullshit evens out over the course of the game. It usually does, which makes it a little easier to take, but I don’t think the bullshit was spread evenly here when it comes to the decisive moments.

Whitehouse aside, this was a pulsating clash between two sides playing high octane, high tempo rugby in front of a packed Aviva Stadium that made a mockery of the doom-mongers in the press who spent most of the week worrying about stardust like they were Tinkerbell with a Macbook, an 800-word print deadline for an hour’s time and an unhealthy obsession with Johnny Sexton’s whereabouts.

Despite the warnings in the press that Big Well Known Rugby Man might not be playing, 48,000 rugby fans decided to show up regardless and provided a fantastic atmosphere almost from the get-go. There were fantastic passages of running rugby, superb defending, a top-drawer, ultra-technical set-piece battle and a hugely physical confrontation at the breakdown. It had everything you could want in a collision between two of the top sides in Europe at a venue like the Aviva.

From a Munster perspective, I thought this answered a few questions that may have been lingering about our work since the start of the season. Our attack was varied and effective, for the most part, with the final pass often being the difference between a line break that leads to a try and something else.

I spoke about this very sequence in The Red Eye pre-game;

Two moments stick out here – the timing of Earls’ pass (fair play to him for not making a meal of James Lowe’s high shot in today’s environment by the way) and Beirne’s decision to carry on the outside edge. I think if we get one but not the other, we have a high potential moment with our pod of three forwards surging on the outside edge. This opportunity was created by taking Leinster’s big strength – their power in the middle of the pitch – away from them by working the ball to the edge while drawing out their blitz.

We generated another opportunity through a similar move a few minutes prior.

Getting the ball to Sweetnam with space to make a pass or kick decision at the edge was the aim here and Munster won a scrum off the back of Sweetnam’s decision to stab this one through the line. Again, we moved the ball beyond the Leinster heavy defence and got access to the edge.

That could only work with our middle of the field pod – Carbery, Goggin and Arnold usually – going deep to the gain line, running hard decoy lines (and disrupting thereafter) and passing well out of the back when the opportunity arose.

Those decoy lines could only work when you sell the threat of your power in the carry. Arnold and Goggin in particular certainly did that.

… and you’ve got a much-improved performance from Munster with the ball in hand.

Throw in a dominant scrum – thanks in part to O’Mahony’s bind on the tighthead side it must be said but mainly due to a superbly physical performance from our front five – and a fantastic mauling performance and you have got a lot of reasons to be cheerful despite leaving Dublin with little more than overpriced Krispy Kreme doughnuts.

We won’t go too far yet with grand proclamations – Leinster were missing Sexton and Furlong – but I don’t see how even the most ardent of critics could have remained unimpressed with Munster’s work against a formidable Leinster side. We deserved more than we got but got more than the scoreboard might suggest.

Now for the Heineken Cup and two English opponents. If we play as we did here, we’ll be on the right track.

The Wally Ratings: Leinster (a)

Stephen Archer might have conceded a crucial penalty right at the end but I thought he was excellent here overall. He had 68 minutes of hard scrummaging against two Lions and came out mostly on top. His rucking, passing and especially his work in the maul were all superb.

Alby Mathewson had another excellent performance at scrumhalf. He brings the kind of reliability of tempo that Munster usually only get from Murray. Hopefully, his leg injury sustained scoring our third try doesn’t keep him out of the Exeter game.

Dan Goggin had another hugely impressive outing with rock-solid defence backed up by physical breakdown work and monstrous ball carrying. He made a huge case to start in Sandy Park with this performance – that’s how good it was.

I thought Jean Kleyn and Tadhg Beirne had a superb evening. Kleyn’s set-piece power was massively important, as was his ball carrying up the middle of the field. Beirne’s subtle work in the wider channels, as well as his passing and breakdown work, were all really good.

Peter O’Mahony continued his excellent run of form in the last few games with another all-encompassing performance of breakdown skullduggery, lineout skullduggery and scrum skullduggery. Basically, he had more skullduggery than a barful of angry pirates in 17th century Port Royal. If he’s playing like this in Exeter, we’ll be halfway to where we need to be.

Munster did lose this game, we shouldn’t forget. We do have some issues to iron out ahead of Exeter but this was about as good a workout as we could have hoped for. All we’re missing is a point or more to show for it. If we bring the ingredients of this game to Exeter, there’s the potential for an excellent result but there can be no backsliding from here.