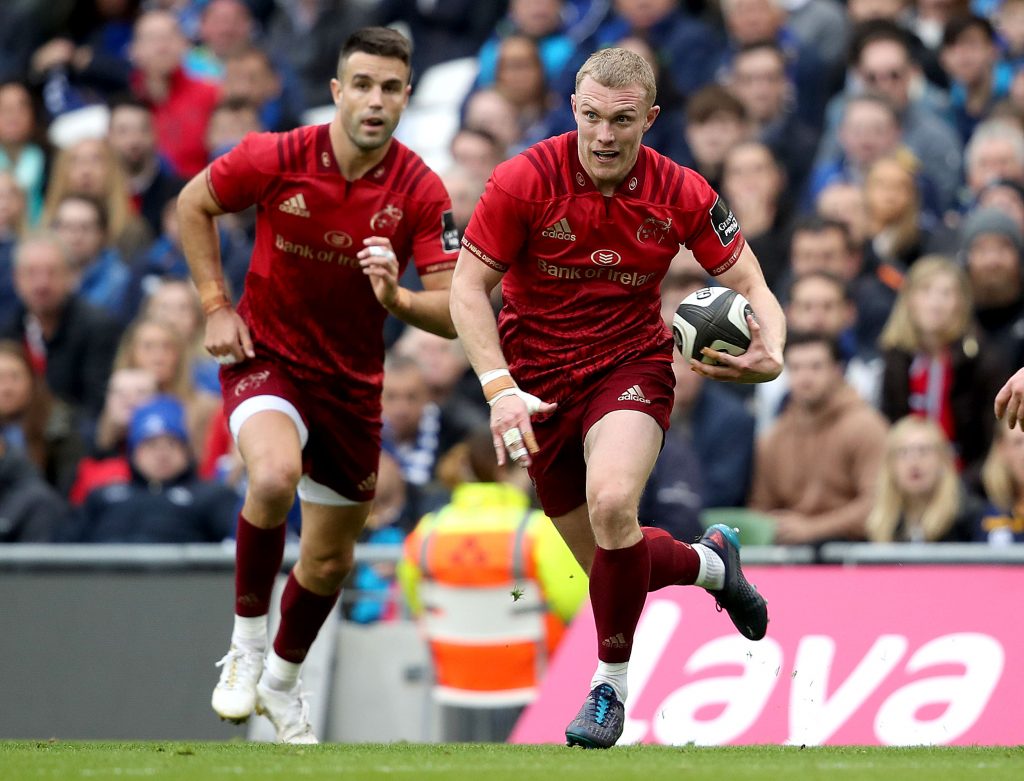 I’m one of those guys that wouldn’t take the sexy mystery box option at the end of a game show in lieu of hanging onto my €20 HMV voucher and free weekend in Trabolgan – so if you’d offered me a losing bonus point pre-game here, I’d probably have taken it.

Yet, now that we’re sitting here with that losing bonus point, it feels like an Aero we robbed from a Centra – something cheap and, ultimately, unsatisfying. There were positive takeaways, of course, but the fact remains that this was another defeat to Leinster in Dublin and, more specifically, another loss in the Aviva.

That’s four in the last year. So the learnings and positives we garnered from the “experiment” – along with the point for our trouble – have to be taken in that context but also in the context that there’s absolutely nothing of consequence won or lost in October.

Given the experimental nature of our backline and the makeshift nature of our second row, we had to prevent Leinster from getting easy access to our 22 with a premium on not giving away ground on the maul or . That meant good maul defence, excellent scrummaging and rock solid discipline. We had two of the three but that wouldn’t be good enough. Indiscipline in our phase defence meant we spent most of the the first half exiting from our own half and defending lineout mauls. You can’t do that against a team ran by the Johnny Sexton and expect anything good. We gave away 11 penalties to Leinster’s 8 but most of ours were given away in short order during the first half and through that field position, Leinster would go on to take a lead they would never relinquish.

Throw in a few missed tackles, strife under Sexton’s expert high ball and some unfamiliar defensive combinations at 12, 13 and 15 put us under stress that we didn’t handle all that well.

In the second half, we gave away a few more silly penalties and, with a seven point cushion, Leinster could afford to kick for goal and stretch the lead out to the point that we were chasing a losing bonus point a little sooner than we would have liked.

A lot of our problems came from our ruck alignment on defence and, more importantly, in attack.

In defence, we had a deliberate ploy in place to make the tackle, avoid the ruck, fan out and deny them numbers and repeat. Good in theory, but we didn’t slow Leinster’s ball down well enough in the tackle so we were giving up quick ball on top of quick ball. In that scenario you have to be rock solid on your offside line and we weren’t – giving away multiple penalties in dangerous areas for offside in the first half alone. This – along with the maul – was where we missed Kleyn and Grobler making dominant tackles.

Ultimately, we didn’t contest Leinster’s ruck ball and paid for it. Even then, I’d be hesitant to say we defended badly – average would be fair – but what really killed us was Leinster’s ability to kick the ball away after getting nowhere on multi-phase ball and then reliably get it back through Adam Byrne. Even off restarts, our unfamiliar set up led to at least three knock ons in the air that should never have been conceded. Sexton spotted out weakness there and hit it with precision again and again.

We suffered the same problems as last week on our own ball but with an odd facet; we didn’t really carry any kind of serious ball through the forwards. In a way, this is almost exactly what I expected pre-game but I was surprised to see it all the same.

We rarely went through three or four heavy phases and I suspect that had a lot to do with our second row make-up. We seemed to place a premium on the speed of the ruck rather than dominant position over the gain line, with intent to attack in the wide channels before Leinster could fold the likes of Ruddock, Toner, Fardy, Furlong, McGrath around the corner.

We weren’t successful in implementing this plan, despite some encouraging flickers.

Before the game, I posited that Munster’s selection of three outhalves in the starting 15 was a ploy based on trying to exploit Leinster’s slow defensive reset and get at O’Loughlin, Byrne and Daly in the wider channels. It worked, on occasion, but we were let down by a mixture of too much distance from the gain line at 10 and some inaccurate passing/offloading once the ball went wide.

You could see what we tried to do – and I’ll illustrate this in a Premium article this coming week – but what juice we got from this ploy wasn’t worth the squeeze. The frustrating thing was how close it seemed to coming off at times but this is what happens with an expanded game plan – it takes days like this to get the squad’s collective “eye” in. I’m sure we could have lined out narrow and hit phase after phase (after phase) but we’ve seen the ceiling of that gameplan in big games and the physical cost of it come the end of the season.

It’s like this; if you’ve ever said that Munster need to improve their attack then you must, logically, accept that there’ll be days like this in big games early in the season where it looks disjointed, where some passes drift forward and offloads don’t stick. Otherwise you’re just saying stuff because it sounds like it makes sense.

“We need to attack better!” – this is how that happens, game by game, minute by minute.

We turned the ball over 16 times (one less than Leinster) but we offloaded 17 times to Leinster’s 6 and beat 14 defenders to Leinster’s 13. Small margins.

Either way, it didn’t work here and we were fairly poor overall. We did learn a few things that will be useful going forward but that’s scant consolation when you remember that we lost by six points. Small margins, eh?

Anyway, let’s get to…

First, Rory Scannell. He was only on for just over 15 minutes but made a bigger impact on the game from midfield than we’d seen for the previous 65. He made some incisive passes, two impactful carries and added that x-factor that Munster needed to kick things into gear.

Keith Earls was excellent. Let’s agree that he got badly caught under two high balls but other than that he looked more dangerous than a rabid dog covered in syringes loose at a crèche. He scored two tries, could have had another and looked the most likely to make something happen for Munster today. He’s getting better and better.

“But we lost to Leinster! How is there not a One Crown Sad Wally scourging for every man jack of them?”

Go read a forum for that shit. You can probably read some stuff about whether X player played with enough “passion” and other vague nonsense while you’re there if that floats your boat.

The truth after a second watch is this; we were mostly bang average and that was the problem. Playing bang average ball might be enough to beat the Cardiff Blues of the world with a bonus point but it certainly isn’t good enough to beat Leinster in the Aviva, as we duly showed, even when they weren’t all that hot outside the imperious Johnny Sexton.

Sure, the likes of Tyler Bleyendaal and Ian Keatley were verging on a One Crown rating due to not doing much of anything at all with the ball in hand in Tyler’s case and playing a little too deep for our gameplan to work in Keatley’s case. But then you look at the excellent tackles Tyler put in at 12 and the intercept try that Keatley snaffled up to tie the game in the first half as a mitigating factor. They were both really average here and, like I said, that was the problem.

I thought the front row of Niall Scannell, Dave Kilcoyne and John Ryan did excellently in the scrum. It went way better than I expected given patched up nature of our second row and that we were giving up a crazy amount of weight in the pack overall. All three did give away six fairly needless penalties – especially in the first half – which drags their overall rating back to bang average.

We have to mitigate for Billy Holland and Robin Copeland a little bit in the second row. They were fairly bang average here but if Kleyn and Grobler were fit, I don’t think we’d see Holland and Copeland involved in the starting XV. They did as well as they could but lacked the low gear power to impact Leinster in defence, in the attacking maul or in the tight phase exchanges.

Peter O’Mahony, CJ Stander and Tommy O’Donnell had a mixed bag. They all tackled well, O’Donnell made a vital assist for Earls first try and Stander carrying became more effective as the game went on. O’Mahony put a great shift in defence, made some good appearances in the wider channels, worked well in defensive lineouts but found himself well marshalled on our own throw – again, a by product of being our only elite jumping option.

Conor Murray was fairly average. A few good moments here and there but not as influential as he can be.

Chris Farrell had a mixed bag. He had a few lovely fizzed passes and showed some good flashes of pace but he didn’t get the ball on the front foot and suffered from it. The defensive system puts him in a lot of shit or bust situations but even then, he’s far from the liability that some have already decided he is. A pretty average day out.

Conway, Hanrahan and Wootton were all fairly *gulps* average. Hanrahan made a few howlers at full back in defence but looked quite good when he slotted in at 10 in the second half.

The Replacements were mostly pretty mediocre but I really enjoyed the impact Boomer O’Connor had when he came on – a big steal at the ruck at a key time being the highlight.

Overall, you won’t beat Leinster (who themselves were fairly… ordinary) with most of your side playing about par or just below it.

The key point here is to remember that, while this loss was disappointing, I’d posit that we played a lot worse in the same fixture last season. The key now is to take the learnings that this game gave us and pushing on towards Castres.

On this week’s Premium articles I’ll be looking at Munster’s attacking shape in this game, looking in detail at our attacking rucks and focusing on how we’ll take this performance into the Castres game.