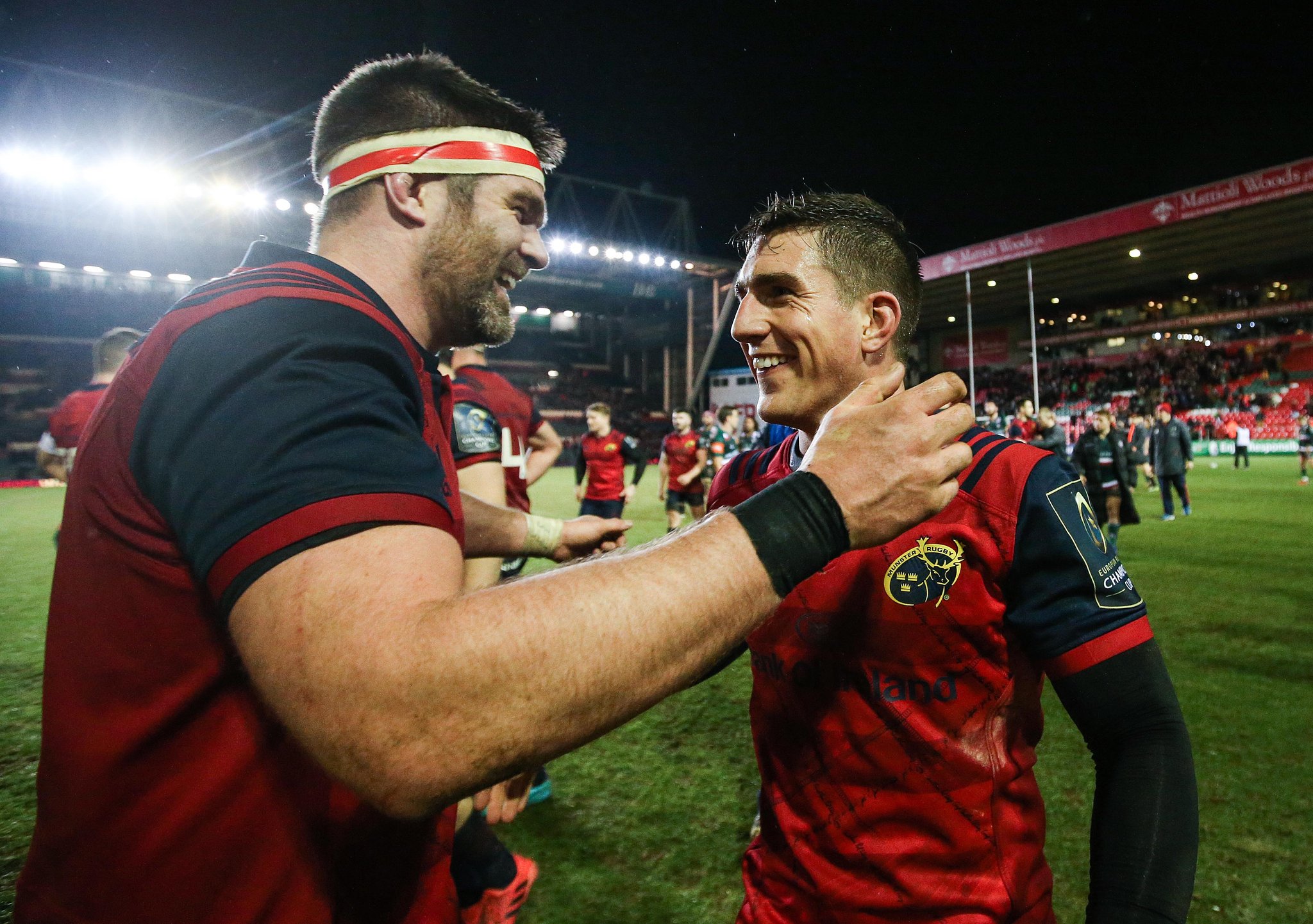 Everyone likes things that are certain – things that are reliable. The sun rises in the east and sets in the west. It’s a comforting thought because it’s universally true. We also know that a chicken doesn’t have lips, that bears relieve themselves in the woods and, so it goes, that Leicester Tigers just don’t lose at home in December back-to-back games.

On Sunday night, Munster smeared lipstick on a Jolie-esque chicken, gave the bear a portaloo and did what no other team had done in 18 seasons of European rugby – beat the Tigers back to back in December.

It’s not a trophy – obviously – but as scalps go, it’s a good one to collect all the same.

Let’s accept, firstly, that this iteration of the Leicester Tigers are a limited enough side and not really the force they were of old. Yes, they’re physical. Yes, they were motivated (almost too motivated, actually). Yes, they fronted up.

But despite all these things, they were quite average here and, more importantly, made to look it by a Munster side that bristled with cold, calculated intent. This gritty, gutsy, powerful win on the road was the perfect follow up to last week’s Thomond Park thumping. We didn’t need to come in screaming. We just did the job.

Beating this Leicester side in Welford Road isn’t the kind of thing that screams “Champions Cup winners elect” but any side that wants to be in the mix for that honour would expect to win there no matter the scenario. That Munster managed to do just that is significant.

This 26-15 (4-0 match point) win probably won’t show up on the radar of the anointed favourites in this competition but as far as engendering belief goes, this is a landmark result for this group of Munster players. Belief goes a long way.

In a way, Munster have had a good yardstick to track their development over the past three years. Three seasons, three Decembers, three back-to-back series against Leicester Tigers. 2015/2016 saw Munster lose both games. In 2016/2017, we saw one thumping home win and a narrow, disappointing away loss. This year saw Munster repeat the thumping home win and, crucially, get that elusive W in Welford Road.

Two losses, one win/one loss, two wins. If that’s not progression, I don’t know what is.

Let’s also accept that, outside a massive physical challenge, this Tigers side isn’t one that we should be measuring ourselves against in a European context. They have all the nark, niggle and pride that comes with being an Aviva Premiership playoff tier team but if Munster are to win silverware in Europe or the PRO14 this year, they’ll have to beat better, smarter teams than this.

But Munster will know that. This ruthless 4-0 dispatching will give them the confidence that they have more gears to run through yet. Munster won this with a bit to spare, without playing outstanding rugby and without having to dig as deep as we might have imagined pre-game.

The most satisfying thing for me was Munster’s ability to think it on the pitch. This is a team that you know runs scenarios after scenarios to game out the chaos of a game.

After a disappointing opening quarter that saw them concede a try and a penalty goal, Munster kept their heads, read the referee’s interpretations and allowed a wildly over-motivated Leicester Tigers side to repeatedly clock themselves in the jaw with their indiscipline. Leicester gave away 8 penalties (at least) in the first half and that just allowed Munster to kick away at the Tigers hard-won momentum.

And the weird thing is, Munster didn’t need to do all that much to get the Leicester Penalty Vending Machine paying out 3 pointers. Two phases in succession? Penalty. Maul moving further than five metres? Penalty. And Munster just kept punishing them over and over again to the point that we went in 12-10 up at the break without having to play all that much rugby.

The second half saw Munster move through the gears when necessary, take points when they were on offer (most of the time) and ride out the Tigers until they gassed and, eventually, broke. That break was coming with a while and it was never more apparent than when Geordan Murphy, a Leicester coach, spent his entire sideline interview complaining about the referee’s interpretation being different to what they have in the good ol’ Aviva Premiership. When excuses like that are coming from the men with the headsets and laptops, you know it’s permeating down to the players – and so it went.

Munster read Raynal’s intentions and adapted to them as best they could. Tigers, on the other hand, saw injustice and seemed to collectively lose their heads.

Murphy’s embarrassing sideline interview wasn’t the only coaching misfire for the Tigers. O’Connor’s gamble on Tuilagi and Toomua came to very little in the end. Both men looked a fair bit off the pace bar a few barnstorming runs from Tuilagi, who I hope has put his injury issues behind him – he’s a fine player.

The Tigers coach spent a lot of time talking about the referee during the week and it was said that this was a tactical move to influence Mathieu Raynal ahead of the weekend. If so (and if such a thing was possible) it backfired on two fronts; Raynal whistled the Tigers off the field for large portions of the game and his team were revved up to the point of red mist.

Counter-productive. They were so pumped up they lost their first-half discipline, and let us into. Fire in the belly, but steam in the head.

One moment summed it both sides approach to the referee. In the build-up to Tigers’ try, Coles held Billy Holland into a ruck and drew a penalty from Raynal. You can either write that down in your Book of Grievances or adapt on the field to the framework the referee is giving you. Munster did the latter.

A few minutes later, Billy Holland returned the favour on Coles, trapping him in a ruck to draw a 3 pointer in front of the posts.

Leicester couldn’t react in a similar fashion and, at times, seemed to be an on-field manifestation of a surly, sulky newspaper column.

Ultimately, if you want to know how this game played out – just look at the numbers. Again, they only tell a quarter of the story but they are illuminating all the same.

Munster carried more effectively than Tigers through the forwards (56 forward carries for 116m) and shut the Tigers forward carrying down (53 forward carries for 90m). Those numbers don’t look dramatic, but in the narrow confines of Welford Road, every metre counts and Munster just made more of them. Tuilagi’s carrying happened in non-dangerous areas of the field and was broadly shut down by the Munster midfield and back row. Matt Toomua didn’t really have a massive influence on anything.

It’s game over for the Tigers, you feel. But Munster look onward to Paris and a few dollops of hard medicine for the Castres boys in the Hurt Palace of Thomond Park.

But that’s for another day.

Beating Leicester Tigers in Welford Road still means something and hopefully, it always will.

But what a result and with it, I’m reminded of something.

A few years ago, Leicester came to Thomond Park and beat Munster, becoming the first side in Europe to do so. Then they became the only side to ever win there twice in Europe a few years later. That hurt.

On Sunday, Munster went to Welford Road and dragged a trophy of their own back to Thomond Park – Leicester’s 18 year long back-to-back streak. The circle of revenge continues.

Why do we keep doing this to each other?

You know, sometimes I think that Munster and Leicester are destined to do this forever.

As per usual, players are rated based on their time on the pitch (no rating if on less than 15 minutes bar extraordinary circumstances), if they were playing notably out of position, and on the overall curve of the team performance. Duncan Williams, JJ Hanrahan, Darren O’Shea and Keith Earls were not rated due to being unused substitutes.

This was an excellent squad performance. Whatever about the Tigers quality overall, you don’t win in Welford Road without playing extremely well as a collective. Some guys might have been in Two Crown City on another day but the curve of the result drags them up a notch.

Dave Kilcoyne had a good day of scrummaging and I was quite impressed with Brian Scott’s power and set-piece when he came on.

Jean Kleyn was a powerful presence throughout and really marshalled the Tigers maul quite well while being a constant source of go-forward on our own ball.

Billy Holland had another one of those games where he just kept showing up for work again and again. He’s relentlessly hardworking, durable and tough as they come. What a servant.

Chris Cloete and CJ Stander had another good day at the office.

Chris Cloete had another highlight game despite heavy, heavy attention from the Leicester pack. His chase back on May was table thumping stuff and he can be very happy with his game. Turning into a bit of a folk hero already.

CJ Stander just looked exactly like what he is; an elite #8. He carried well, tackled excellently and was the man of the hour with the crucial try. Outstanding.

Jack O’Donoghue hasn’t had many standout moments this season but he came into this game as a sub with real intent and made a super impact with a ball ripping tackle late in the second half. A big moment, and that’s what you want from your

Conor Murray and Ian Keatley were, again, the stand out halfbacks on the field. Conor Murray was, as usual, just a level above his opposite number. Ian Keatley turned in the kind of calming performance that has become his hallmark this season. He made some early mistakes but just threw them away and went back to rocking it. A great show.

Rory Scannell and Sam Arnold stood across from an all international midfield and, for my money, vastly outperformed them. They didn’t have too much attacking ball to work with but tackled everything that came down their channel in defence. Both men played a big role.

The back three of Alex Wootton, Simon Zebo and Darren Sweetnam were really good in defence and physical in the attack. Zebo’s tackle at the end of the game was incredibly satisfying. Wootton, in particular, had the kind of game that made him look like the next Munster outside back capable of ascending to test level. He chased everything, forced multiple turnovers and always looked like making something happen. What a player.

Kevin O’Byrne was on the verge of an Awed Paulie. Stepping in for your first European start in Welford Road and throwing perfect darts while scrummaging extremely well? That’s magical stuff. O’Byrne was playing AIL Rugby last year along with B&I Cup and he just plugs in seamlessly to a massive away win in the Champions Cup. We shouldn’t forget how special moments like that are.

And finally, what a captain’s performance from Peter O’Mahony. Sure, he blew a read for Tigers try but he more than made up for that with some excellent tackling, rucking and doling out an absolute masterclass in the lineout on either side of the throw. His speed into the air and jump quality are the best in the Northern Hemisphere – arguably the world, right now. A high-quality performance from a high-quality individual.

I’ll be focusing on Munster’s excellent Welford Road win all week on TRK Premium with video work, the GIF Room and podcasts. Subscribe to all of it for $2 a month on Patreon.