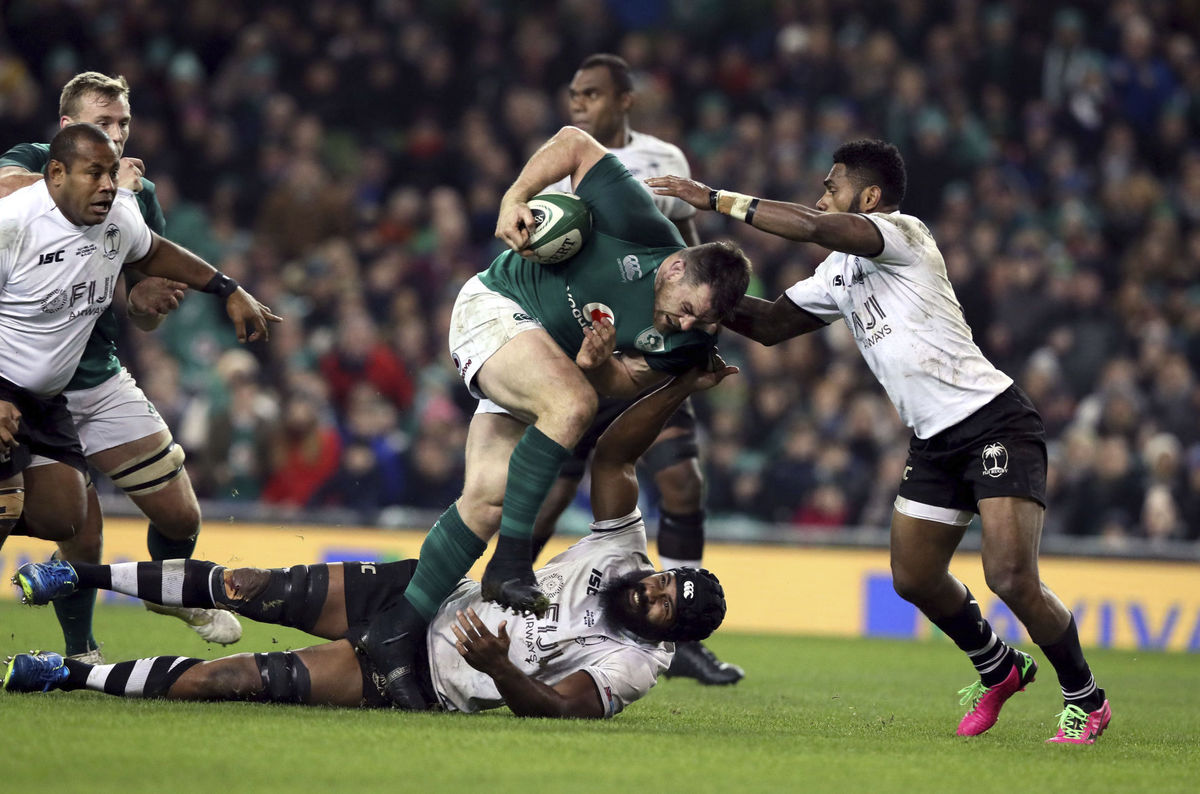 Let’s run through this quickly, shall we? I’m sick as hell today, and not in the good way.

Let’s have a super abridged Wally Ratings while I try not to cough up my lungs all over my laptop.

Fiji were not as ragged and 60 minute gas-out prone as they might have been and took the two tries Ireland gifted them (one more nicely wrapped than the other).

Ireland – not as game plan specific and accurate as they might have been but will be happy enough to have gutted out a win against what was a very solid Fijian side.

The result – a narrow Irish win in a good game blighted by numerous Mexican waves.

When you see any crowd indulging in Mexican Waves, it’s because they’ve half checked out of the game as a contest. Initially, it seemed that Ireland racking up the tries would be a foregone conclusion so, during breaks in play, why not do a Mexican wave? The game may have started like that, but it certainly didn’t end like it.

Ireland’s early clinical work with ball in hand certainly suggested that they had done their homework on the Fijians as they targeted their props and locks on ruck transition again and again.  The electric Joey Carbery could do no wrong for a spell, and had an important hand in most of the good work Ireland did.

But then I felt that Ireland started to go off script a little and abandoned the game that worked for a shoot out with the Fijians.

That goes a long way to explaining the 23-20 final scoreline. Ireland were almost trying too hard to impress at times and two errors turned into 14 points for the Fijians made this game a lot closer than it had any real right to be.

Fiji were game, immensely physical and snaffled up the opportunities a disjointed Ireland presented them.

In a way, it shouldn’t have been too much of a surprise.

When you consider 13 Irish changes and, amongst them, a raft of unfamiliar combinations there was always a chance that Ireland could fall into quicksand here. One wagers that’s why Schmidt picked what would be a very familiar Leinster backrow of Conan, Ruddock and Murphy – but it was their disjointed performance on the ball at the ruck that caused a lot of Ireland’s troubles. Ruddock and Conan carried quite well against massive opposition but our cleanout was consistently poor.

That scrappy ball played into Marmion’s poor day out. The Connacht scrum half was a little scrappy in his service from ruck to ruck – normally a strength of his –  and his kicking/passing was a constant problem. It wasn’t all bad, for sure, but it was inconsistent and that causes trouble for those outside.

The risk that Schmidt took here was quite profound and probably the biggest roll of the dice that he’s taken as Irish coach for a home game. Fiji came pretty stacked with Top 14 and Aviva Premiership calibre performers and they disjointed Irish performance played into their strengths.

But Ireland gutted it out.

Whatever about anything else, this Ireland squad – with 13 changes – went to the well and got the job done in the end. Was that a more valuable lesson than a 40 point spanking? I think so. Would Carbery and Marmion had a better day out if they were paired with Murray/Sexton? Perhaps, but what would they have learned about adversity then?

This 23-20 win (thanks in the main to the impact of Healy and Keatley off the bench) will go a long way to filling out Schmidt’s thoughts on this squad and, in a lot of ways, be of more use to him than the facile win I predicted before hand.

As per usual, players are rated based on their time on the pitch (no rating if on less than 15 minutes bar extraordinary circumstances), if they were playing notably out of position, and on the overall curve of the team performance. Robbie Henshaw and Luke McGrath were not rated.

The base line rating for this game is a default Two Crown rating. As such, here are the standout Three Crown and the One Crown players from my view huddled on a couch whilst literally dying.

Jordi Murphy had probably his worst appearance in an Irish shirt as far as I’m concerned. I’m a fan of Jordi’s fundamentals, but they weren’t really on show here. Normally, Murphy is a decent to good ruck specialist but here his timing and angles looked off and he blew a few cleanouts that he would normally make in his sleep. On the plus side of the ledger, he made two good steals and was very decent in the lineout. Overall though, pretty poor.

The same could be said of Keiran Marmion who had a canary in the coal mine type of game. When the ruck isn’t working, the scrum half suffers and that was certainly the case here. Marmion’s usually snappy service only came in fits and starts, he was a little slow at the back of scrums post “use it”, his kicking was generally pretty poor and he blew two exits fairly badly.

That said, Joe did leave him on for a while post reinforcements and I think that’s a reflection on the ruck circumstances he was dealing with.

Andrew Conway was pretty excellent here. His pace, kicking and awareness of options around him made him an extremely dangerous option in the second line. He’s really blossoming as an elite back three option at wing or full back. Also, he confirmed his Lunster heritage pre-game so it’s all good.

Joey Carbery had a great game overall. Sometimes he has a habit of passing a ball to an isolated player and his goal kicking needs work, but he has something special. His ability to attack the line and fizz passes off either side with little in the way of wasted motion hint at a special player in embryo. A really good day out in the 10 shirt.

Cian Healy had a real argument for Man of the Match, even though he only spent 25 minutes on the pitch. He was a MONSTER and proved that he’s the number one loosehead in the country at the minute with Kilcoyne not far behind.

Ian Keatley – delighted for him. He came off the bench and kicked Ireland to the win when needs be, as well as directing us around the pitch with some real poise. Where Carbery was electric, Keatley was assured and deliberate. He played like the 240+ professional game player that he is and was the definition of calmness. He’ll bench against Argentina for sure, and it’ll be richly deserved.