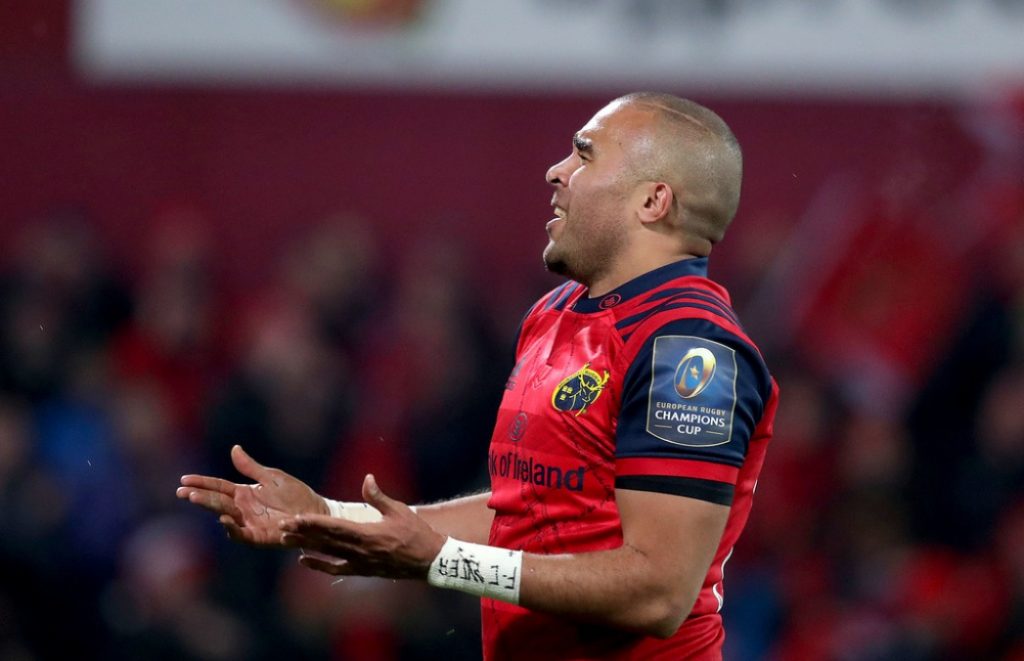 Losing the first leg of a back-to-back 5 match points to nothing when you’ve already lost once in the pool puts in sh*t or bust territory. That’s where Leicester Tigers find themselves this weekend.

That might go some way to explaining why Matt O’Connor has brought Manu Tuilagi, Matt Toomua and Tatafu Polota-Nau straight into his matchday squad with the two returning midfielders going straight into the midfield. When your European season is hanging in the balance you have to make bold calls and that’s what the Leicester Tigers coaching team have done (full teamsheet here).

The benefits of playing Toomua and Tuilagi is obvious, but it’s not without risk. Putting two guys who haven’t played together in quite some time (Toomua since October and Tuilagi since September) has a real risk of being caught cold, let alone the risk of coming into a game without being fully match-fit. I do have a sneaking suspicion that this lineup may not be the one we see Sunday and that this is a little bit of a pump-up but, for the time being, let’s just assume that the team named on Friday will start.

Basically, Leicester are all in and, because of the differences in pitch and personnel, much of what we saw in Thomond Park last week will be almost irrelevant to this week’s game.

Let’s have a look at how it might go this Sunday.

Lay of the Land

The first thing anyone who’s going to Welford Road needs to understand is that it’s quite a narrow pitch by regular standards. It’s shorter too, but that’s less of an issue than the narrow width, which plays into Leicester’s game plan perfectly.

What does a narrow pitch mean? It means it’s easier to defend wide-wide plays, it means box kicking has to be incredibly accurate, it means finding touch is easier (especially with a shorter pitch), and it means that the tight exchanges become exponentially more important because the pitch almost acts like a funnel, in that it makes tight, one out carrying all the more effective.

This is the basis of the Welford Road confrontation.

Leicester can pick bigger forwards (and they have) because the area in which they’ll operate in is smaller – they’re under less cardio strain immediately. A lot of this isn’t exactly revolutionary information, obviously. A narrow pitch is easier to defend than a wider one.

Here’s a quick comparison image to give you an idea of what I’m talking about. On the left of the image, we’ve got a decent defensive set up but one that’s still a little vulnerable at the edges and between #3 and #12. The natural width of the pitch means that #12 is in a tough position here tactically. He can’t go too near #3 because that would expose his flanker in the wide channel. He can’t stick to his #6 because that leaves a gap a mile wide outside the tighthead.

On the right of the image, you can see a similar alignment filling the pitch. See the difference? #12 can move closer to #3 to close that gap but also not expose #6. Even on this little example, the extra few metres makes a world of difference.

In practice, this generally means that forward rucks will be closer together so, naturally, this places a massive emphasis on winning the collisions and slowing the ball – almost more so than on a regularly sized pitch.

This is a place where you have to win the collisions. I know you do everywhere else but you can’t give an inch in Welford Road.

Last year, I felt that Munster managed this fixture badly, even though we took an initial 6-0 lead before being dragged back by the Tigers before halftime. We were struggling at #10 that day but the biggest issue was our management of defensive collisions and the ensuing breakdowns.

This was straight from the kickoff. See how quickly Leicester could run through the phases? Their forwards are absolutely blitzing the rucks here too because they know that they can spare the numbers.

Now, we’re deliberately staying out of most of these rucks but we’re not slowing down the Tigers ball in the tackle. That means we’re having to reset quickly to repel four or five tight punches from their heavy carriers which is fine but not optimal. You’re asking for a mistake or a penalty in these circumstances if you overheat your fringe defence.

We can’t allow the Tigers to settle into carrying patterns like these. They’ve picked a very heavy back five that is built to just run through phases like this until something cracks.

Put simply, we don’t want to be soaking up 6/7 phases of this kind of carrying with any regularity.

I’m not sure if attacking the rucks collectively as we did in Thomond Park will work here, or even be that advisable – Tigers tend to ruck much more aggressively in Welford Road where overcommitting to rucks isn’t a huge deal due to the width of the pitch.

I’d probably set up with a similar system to last year – stay out of the rucks, try to soak the carrier man on man and bait the Tigers into “righting the wrong” of last week. Let them burn their heavy back five doing up and downs and attack them later.

Getting Manu Tuilagi back from the witch doctor and into the #13 shirt was a no-brainer for O’Connor. Matt Smith, the fill-in #13 last week, did less than nothing for his time on the pitch and that lack of an outlet in midfield really choked up the Tigers attacking options.

Namely, as a 3rd/4th/5th phase carrier after the pack have punched the line. Look at how many players he draws in that outside channel – four, for those counting – and that means we’re numbers down on the reverse play. Not so bad last year, but this year the Tigers will have the likes of Ford and Toomua pulling strings.

He’s a dangerous runner when he’s coming into the line late like he is here because – wait for the elite analysis here – of how goddamn powerful he is on the ball. Yeah, that’s not a surprise. Tuilagi is a monster on the ball everywhere on the pitch and Arnold/Scannell/Wootton/Sweetnam will have their hands full dealing with him.

But that, too, has advantages for the switched on defence.

Chris Cloete’s role will be incredibly important this weekend, not least for his ability to deal damage to Leicester’s main wide strike runner Manu Tuilagi.

If we know that Tigers are going to run tight phases through their forwards (and we do) with the expectation that, man for man, we can limit their gain line, we also know that the next outlet will be Tuilagi in the wider channel. IF we can stop Tuilagi behind the gain line, perfect. If not, we can use their own gainline against him by deploying Cloete near the point of contact at #13 to attack the ball in the one area of the field where Tigers cleanout will not be heavily stacked.

Look at who was cleaning out Tuilagi in that last GIF;

Two backs? Interesting. This is doubly true when they are setting up for a big reverse play with the recovered forwards.

If we can get Cloete near the contact point of Tuilagi’s carry, we can be in with a real chance of stealing the ball with such light ruck support. If Toomua, Tait, May or Thompson are trying to clean out this ruck – as Tigers often demand – they could find themselves in a tough spot with Cloete.

Leicester will have seen Munster’s relatively diminutive midfield and will have been dreaming about getting Tuilagi into space up against Arnold and Scannell. If we deploy Cloete further out, we lose nothing in the tight (Cloete’s pace + narrow pitch width) but have a real chance to exploit Tuilagi’s ability to get over the gainline. It’ll only work if we can get him to the deck – easier said than done – but if we can, Cloete has the potential to steal ball all afternoon.

If we’re to stick a fork in the Tigers’ European challenge for this season, we’ll have to approach the contest with a little more aggression than we did last season. Man for man, we have to stop their forward carriers. In Limerick, their forwards carried 66 times for a combined 100m with 51% possession – 1.51m per carry. Munster carried 71 times for 131m on 49% possession – 1.84m per carry. That’s quite evenly matched.

Breaking down the Tigers won’t be easy unless they start missing tackles up the middle of the pitch. I think that attacking them narrowly around the ruck could be a good option. Their back row is very big and very heavy. The narrow pitch will mitigate a lot of the ruck to ruck running that they’ll be looking to do but if we can get dynamic ball on two medium spaced heavy rucks, we may be able to attack them like the Springboks;

Narrow, forward carries around the ruck transition area between rucks as Mapapalangi, Mike Williams and Sione Kalamafoni move across can give us an angle to run tight lines of two three down around the fringe areas.

Two quick rucks with good spacing could expose the Tigers slow back five later in the game or on multiphase.

Welford Road does allow some advantages to a side like Munster. Tait at fullback is someone I think we can hurt under the high ball and, with the narrow pitch, we have a little bit of room on kick transition.

This kind of kick transition turnover is less likely to happen in Welford Road;

That gives us a little more wiggle room with the scope of our contestable kicking game. I’d be looking to target here; Basically – targeting Tait up the middle of the pitch with the likes of Wootton/Sweetnam chasing and also targeting the transition area around Tuilagi’s #13 channel might be a soft target. Tuilagi’s never been the best under the high ball and I think Tigers will try to cycle him out of the heavy exchanges in defence – that makes him targetable from contestable kicks at #9 but especially #10. If we can work that with accuracy, we can force errors, gain territory and attack the Tigers on turnover ball where their pack are extremely vulnerable on the turn.

It’ll be tough, it’ll be physical, but we have the weaponry to win. Let’s see how it goes.