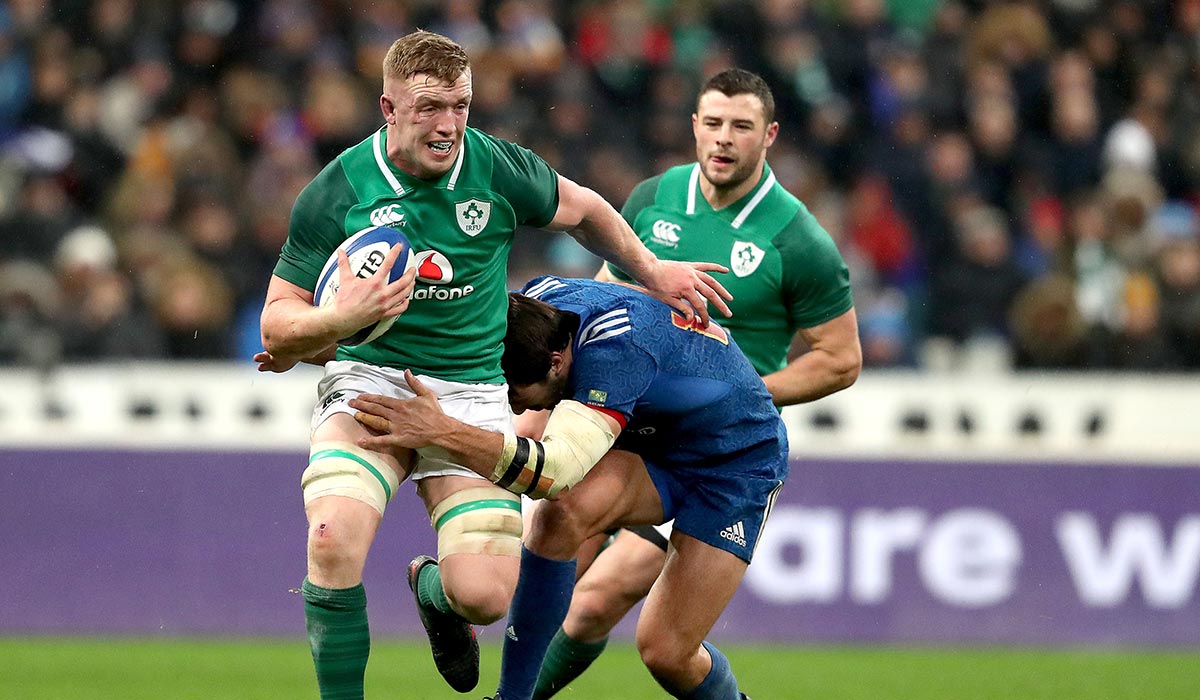 The challenge of playing Italy at home is the most personal challenge in the Six Nations.

When you play them at home, you’re really playing yourself. Can you break them down? Can you get the bonus point you’ll have targeted before the game? Living up to your own challenge and not falling into a pressured dogfight is the aim.

Italy are – by some distance – the weakest side in the Championship. We can talk about the improvements they’ve made under Conor O’Shea (and they have improved) but this is still a side that has won once in the Six Nations since 2014.

As a coaching challenge, that kind of record isn’t something that’s easily turned around. There’s no quick fix to turning Italy into a side that could even regularly challenge for 4th in the Six Nations. What Conor O’Shea is putting in place with Italian rugby probably won’t show benefits for another year or two yet but you can see the potential is there. O’Shea seems to be implementing a style of game that works for Italy’s actual strengths – not the traditional strengths that don’t actually apply to the Italian game in 2018.

If you asked the casual rugby fan where Italy’s rugby strength lies, they’d probably tell you about the scrum, the lineout, the maul and Sergio Parisse.

None of these are true of Italian rugby in 2018 – not even Sergio – and I think that Conor O’Shea is doing a good job in changing up how Italy play their rugby. In previous seasons, I felt that Italy were banging their head against a wall playing a “traditional” game that they didn’t have the players for. They were set up to play conservative, set-piece based rugby with a non-dominant scrum, a functional-and-that’s-it lineout/maul and half backs that couldn’t control a game territorially.

Since Conor O’Shea’s appointment, they’ve been slowly evolving how they play and you can see the roots of that approach in the way that Bennetton Rugby and Zebre have been playing in the PRO14. They’ve been more than willing to play ball at that level and O’Shea will be hoping that week to week approach will lead to dividends down the road at test level. The new way for Italy is based on a kind of “expansive conservatism” that puts a premium on ball retention, hand skills in close quarters and set-piece strike plays.

Here are the teams;

This Italian game was always going to be the “have a look” game for Schmidt with regards to options like Carbery, Porter, Conan and, of course, Jordan Larmour. I think we probably would have seen a bit more experimentation in the starting backline had last week’s game gone a little differently and no changes there says to me that Schmidt wants to get a bit of “flow” going between this combination before the mini-break and the Wales game.

Nothing gets a backline gelling like running in a few tries so that’ll be the aim here. I know that’s a tautology – obviously we’re going to look to run in some tries – but the fact we didn’t last week means no changes and a solid run before we see the likes of Marmion, Carbery and Larmour off the bench.

The starting Irish second row looks better balanced than the one started in France. The inclusion of Toner and McGrath should help Ireland’s rucking and take some of the rucking workload off Peter O’Mahony. The back row is filled out with Dan Leavy on the openside and Jack Conan plugging in at #8 with Stander dropping to the bench after his gigantic workload in Paris last week.

From an Irish perspective, I’d expect Henderson, Conan and Leavy to be our chief carriers with splitting the “startup” phase carry that Stander worked last week.

This selection has more than enough gas to get what we want (a 5-0 bonus point win) out of this game.

I won’t focus too much on what Ireland will be looking to do – it’ll be very similar to what we wanted to do against France. If we remedy the main attacking issues from the French game, we should perform much better.

The prevailing wisdom about Italy is that they’ll gas in the third/fourth of this game like they did against England. I wouldn’t rely on that at all. Most of Italy’s cardio burn in the last quarter against England was down to the massive workload they took on in that game. Italy weren’t just sitting back and tackling; they really pressed at England for long periods of that game. That attacking output came back to hurt them in the last quarter and England ran in three tries.

But we have to remember that this was a home game and Italy would be, naturally, looking to take the game to England in a way that they may not in the Aviva Stadium. I think they’ll play slightly differently in this game to frustrate Ireland and, ultimately, manage their cardio in a way that playing at home won’t allow.

Conor O’Shea is not afraid to try new things with Italy (just ask Eddie Jones) and the biggest change to the way he’s doing things is encouraging Italy to use centre field position and multi-phase possession to generate opportunities.

Here’s Italy’s ruck positioning against England in the first half of their game on Sunday, which counted towards 58% of their total rucks.

If you look at sections of Italy’s multi-phase possession from that England game, you’ll see how comfortable their forwards are with the ball in that field position. Here are three examples from early in the game against England;

You’ll see Italy playing off #9 here and you’ll have noticed how clustered they keep their forwards in the middle of the pitch. We’re quite used to teams playing a “pod” system in attack that sees forwards spread in different positions across the pitch; this is your “2-4-2”, “1-3-3-1”, “2-5-1” and so on. 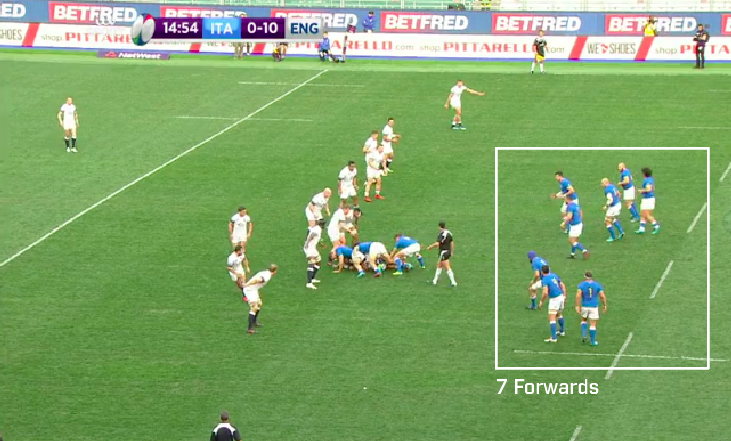 Italy use this formation to get their athletic, aggressive carriers into the game up the middle of the pitch and use their expanded array of close range handling and offloading to challenge the defence in and around the fringes.

Why do Italy use this pattern? It’s the most effective way to play to their strengths. Italy have an athletic pack, two heavy gauge midfielders and a quick back three. Their pack’s handling ability isn’t where it needs to be from a passing perspective, so playing a 2-4-2 would be pointlessly challenging when you want to win games. Italy want to narrow the opposition defence to amplify any mistakes they force out of you and also give their backs space to work in the wide channels.

Look at that image again; 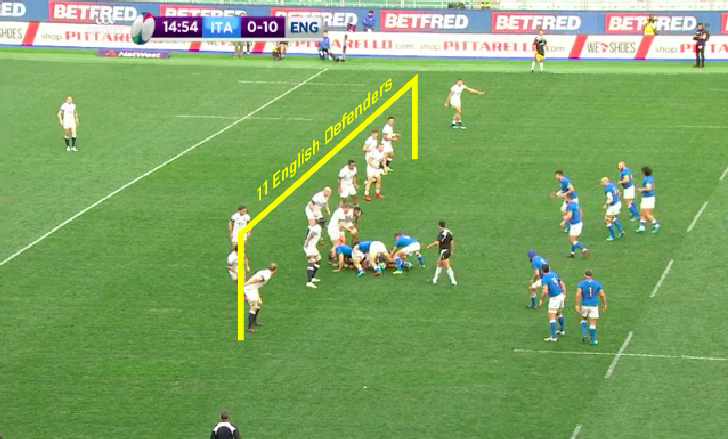 This pattern narrowed the English line, which gave Italy options they can work with wider out. Ireland will have to be wary of this Italian pattern, as it allows them to sustain possession for quite a while. They don’t necessarily always go anywhere with it (just look at the ruck map activity outside the 22) but they can produce breaks from it.

Their forwards are comfortable with short, tip on passes in this alignment. Here’s an example of a “big openside” gimmick they like to use with this narrow pattern;

Note the narrow alignment of forwards sitting off the first receiver in both instances. The end product of this set move is another offload, so watch them go to the well with this exact move more than once in this position.

We’ll need to make sure that Italy don’t get any separation in their forward carries because their tight alignment gives them a good opportunity to surge into space around the contact area. Here’s a good example;

See that? Parisse gets separation to attack Coles one one one and gets the offload away to the narrow run of Bellini for a massive linebreak.

This is Italy using their narrow alignment to cause pockets of defensive disruption that they can attack from ruck to ruck.

Look at the phase before Parisse’s offload;

You see Parisse attacking the space inside Cole before popping the ball to Bellini in the Disrupted Space left after the last ruck. Because he got that one on one, he created the opportunity to play the ball off the ground to the place England were least able to defend.

That said, if you can win the collisions in the middle of the pitch you’ll probably force a rash pass off them if they’ve passed to the edge of their forward support;

Close quarter handling skills seem to be the area that Italy are working on as the basis of their attack. I didn’t see many of their forwards passing further than 2/3 metres on Sunday (well, bar one, and I’ll show you that later) but their forward pack had 33 passes between them. England’s pack had 18.

That many passes, combined with their narrow alignment in the middle of the pitch should tell you everything that you need to know about their attacking plan.

That isn’t to say that they don’t play wide hands – they do;

But it all flows from the work of the narrow eight in the middle of the pitch.

They even go to it on set plays;

This is a great strike off a scrum. There’s nothing too fancy here – just simple hands – but look at the option they get when they come back inside;

There are those two pods of four forwards in the middle of the pitch with the key pass out the back coming from the loosehead prop (that pass I told you about earlier).

Italy use their 0-4-4-0 alignment to keep opposing forwards into the middle of the pitch, attack the fringe of the ruck, and create space for their backs to attack in the wider channels if they spot poor defensive folding.

How do Ireland combat this? Win the forward collisions (obviously), narrow around the contact area to stymie the Italian clean out pod/prevent the offload and then slow the ball to prevent Italy hammering their two forward pods back and forth like one-two punches as they managed against England. No better men than Dan Leavy, Jack McGrath and Peter O’Mahony for that job, you’d say. If Ireland can disrupt Italy on their ball, prevent them from bringing us through the phases and punish them at the scrum, then Ireland will stretch away early.

I don’t think Italy will have much for Ireland in the maul, and I think we’ll see a lot more ground made there than we did last week.

It should be a healthy bonus point win. Should be.