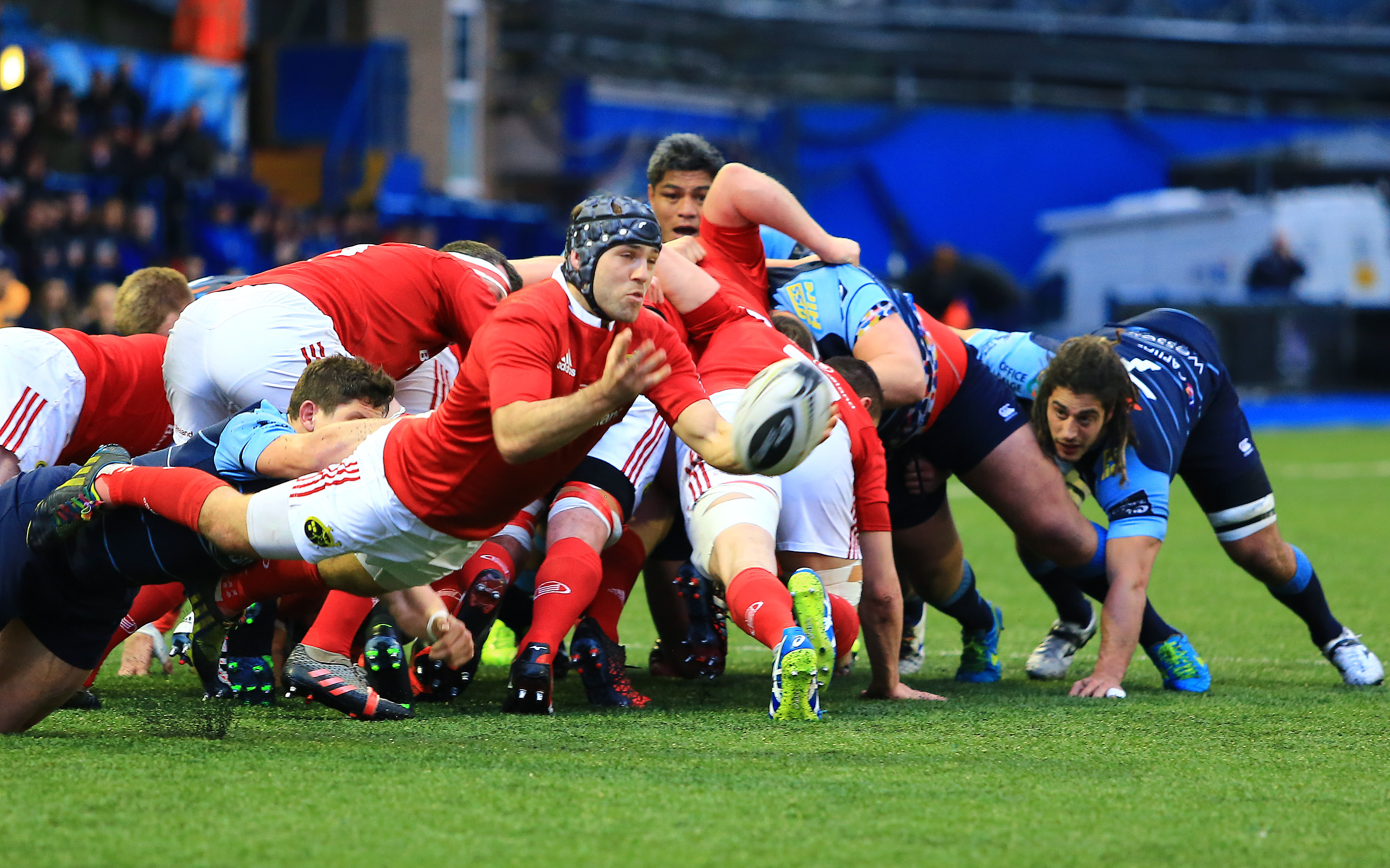 Munster lost twice at home last season; once to eventual champions the Scarlets and once to the Cardiff Blues, who rock up to Thomond Park for the first time in a few years this coming Saturday.

In a way, we have unique business with the Blues in this fixture. Avenging a loss from last season and looking to put the hammer down after a bad loss last week? That’s a recipe for a spicy meatball, and with that spice comes danger, too.

We will have to be more physical than them. More aggressive. More precise. If we aren’t, Cardiff have the ability to frustrate our ball carriers on the floor and really hurt us off the most dangerous turnover ball of them all – phase two/three turnover – just like they did last season in this very fixture. Our mentality will have to one of settling scores; both of the memory of last week and the memory of this game from last season.

That’s what makes this game such a mental landmine.

Cardiff will know the recipe for beating Munster is similar to the game they brought to Musgrave Park this time last year; use the likes of Turnbull, Dacey and Navidi to turn over any attempts at width we bring to our wider rucks and then punish us off set piece and on kick turnovers.

Last week against Connacht, Cardiff put in a strangely lopsided display. They had five players with tackle counts over 20 and three with over 15 but that’s more to do with Connacht’s shocking attacking patterns and decision making than anything else. Connacht were just running into brick walls again and again.

When I looked at this game, I saw that Connacht were badly hurting for ball carriers and that certainly made Cardiff’s defensive job much easier even though they still didn’t do that good a job.

Let’s have a look at the Forward Carrying Numbers;

That paints a picture of Connacht not getting over the gain line with any dominance. Heffernan – Connacht’s hooker – carried the ball 27 times for 27 metres, if you want an illustration of the frustration that Connacht had in contact.

If we get any kind of phase carrying dominance on Cardiff, I think we’ll win comfortably but again – that’s easier said than done.

Our weakness is the same as always – a super stack off a quick centre field ruck. Cardiff will have seen this against Glasgow and will be out to exploit it again if we don’t give them easy running avenues on kick turnovers. Whether Cardiff have the particular skill set to run that kind of style that catches us so badly remains to be seen but I’d be doubtful on what I’ve seen so far from them.

As for Cardiff, I’d rate them about average so far as scrum, lineout and maul goes; they shouldn’t really have anything for us in all three categories outside the 5m drive.

Where we can really attack them is on third or fourth phase, especially around the fringes.

It’s like this, if Connacht had their heads switched on, they could have blown Cardiff out of this game inside the first 40.

The key is to target the defensive pace of five specific players on phase 3/4 after a set piece. Filise, Williams, Welch, Dacey and Davies have very poor defensive speed and that is a critical weakness beyond three rucks spread across the field. This isn’t isolated to them either – Earle and Down – the two other possible locks they might select, are equally slow.

Ideally, you want to stretch these three rucks in such a way that you keep as many of these five players on the open side of the ruck on the reverse after phase 3.

Here’s what you get if you do; the ruck the GIF starts on is phase 3.

Look at that sloppy fringe defence from Dacey and Filise! If Connacht had a winger coming in to exploit that massive, gappy dogleg against the grain, it was a near certain linebreak. Even a pod with faster carriers than Dillane, Masterson and Roux are attacking that fringe, it’s serious trouble for Cardiff.

You can see this heavy alignment coming across the field right after phase 2; A fringe gap that big after three phases less than two minutes in? Concerning, from a Cardiff perspective.

Even then, Cardiff were set on making more errors. Look at the tail end of the first GIF – they’ve left Nick Williams defending the midfield. When Connacht get the ball back, they’re still on for a line break if they can just put the ball through the hands;

Connacht have isolated three of those heavy five on the reverse play, even after a slow ruck – Cardiff just haven’t realigned.

From the openside pillar to Halaholo, Cardiff have Thyer, Davies and Williams leading the “C” defensive line. Connacht’s set up and execution is horrible here; Deegan’s pass and no inside runner to hold Thyer/Davies/Williams means they can just lumber out towards the ball but from our perspective, the space was still there after two dangerous rucks. Exploitable.

This reckless alignment hints at a lack of defensive awareness and “ruck fever” – almost like they’re being judged on getting to the ruck, and forcing something there rather than making sure that they aren’t killed on the phase afterwards.

Why they persisted to use Williams as the “C” defender and as the tail gunner on defensive lineouts, I’ll never understand; he’s just not mobile enough when attacked with pace.

Connacht had the right idea here;

And, as I’m focusing on this moment in the game, I want to draw your attention to something that I spotted on a few occasions; Cardiff just not working to get back in the line after mauls and some wide rucks.

Connacht have clean ball, 13 Cardiff players on one side of the pitch and if Connacht get this ball to Deegan, it’s almost a certain try but… that isn’t what happened.

You’ll note Williams leading the linespeed here too which, for me, is madness. Should they repeat that tactic this weekend (and why wouldn’t they?) then I’d hope we’d bring some speed in off the wings to exploit that space.

He was exploited twice here – he’s doglegging right before Connacht spill the ball and he was buzzed at the lineout; something Connacht would go back to a few times to good success.

Look at this move (maul feint, break at tail) that left a collossal hole for Connacht to attack.

And while I’m on repeating bad habits, look at them cramming 10+ players into one half of the field on defence while Connacht are on a yellow card. This one is particularly bad, so remember this for later. Only Connacht’s poor attacking alignment and decision making stop this from going to the outside edge where – you’ve guessed it – Williams is the “C” defender with Filise outside him.

Buckley does exactly what Williams and Filise would have prayed for him to do – trot into them from a near standing start and proceed to get wiped out in the tackle.

These defensive errors and misalignments were systemic for Cardiff and it’s an indictment on Connacht that they didn’t put them away in the first half. The weather didn’t help, for sure, but the space was there again and again.

Cardiff continued to align their slowest defenders alongside each other and Connacht just couldn’t take advantage.

Williams at “C”, Dacey inside, with Filise and Davies outside and a gap you could park a Fiat Punto in between Davies and Halaholo. Connacht – again – answer Cardiff’s prayers because any kind of pass out the back and their were numbers outside. Cardiff’s alignment and defensive pace problems were such that sometimes they overlapped themselves in defence.

I’ve highlight the four heavies in the line with Williams at “C”. They make a dominant tackle and keep Connacht behind the gainline but their linespeed and spatial awareness is so slow that they end up, somehow, defending an overlap on the very next phase when they had numbers and Connacht were down to 14 men. And on the very next phase they ended up with 11 players in shot defending a 14 man Connacht side off dominant tackles. You’ll remember this pic from earlier. This kind of alignment trouble and slow defensive pace didn’t just happen outside the 22 either. It was all over the pitch. Look at this giant fringe under their own posts 10 minutes into the game;

Cardiff’s remarkable tacking numbers are almost more down to Connacht’s willingness to literally run into them than any excellent defence from Cardiff. If Munster can bring real pace into the fringes, there will be space there to exploit on phase 3 and 4 if we can get their pack sprinting-stopping-sprinting across the pitch. For big lads like Filise and Williams in particular, it’s not the sprinting that’s the issue, it’s starting and stopping in between. Hit them there, and we should have a reliable means to attack them as long as we retain the ball and do a number on Navidi before he gets a chance to settle into a turnover rhythm.

If you enjoyed this Premium Article, be sure to recommend it to your followers and friends.