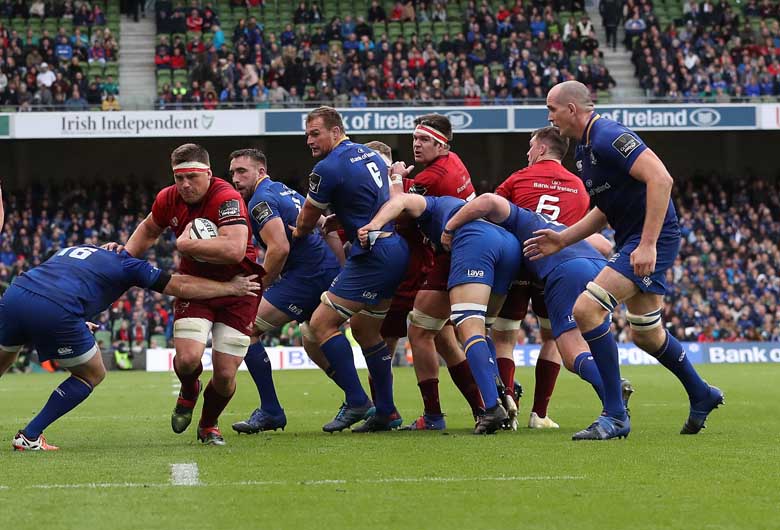 The GIF Room :: Working The Maul

Of all the stats that Saturday’s defeat to Leinster produced, one was quite predictable – Munster’s ineffectiveness in the attacking maul.

The stats here were quite grim when looked at out of context. We had 14 successful lineouts but only four mauls, two of which were “unsuccessful”. That isn’t a good return by any metric so I thought it might be a good idea to look into why that was.

The very first reason to look at is personnel; we just didn’t have a specialist bracer. An archetypal second row forward doesn’t just have to be tall and a good jumper, they also have to possess a strong bracing game at the front of the maul. So, basically, when a good second row comes back down from their jump they have the power to lock the maul in place, brace against the opponents counter shove and then use their power to drive the scrum forward as the “point of the spear”. If the point of the spear breaks, the shaft of the speak will bend and break under pressure.

So when Munster worked most of their lineout ball away from the maul, I think it was mainly a reaction to a lack of specific personnel in the second row. In Copeland and Holland we had two hard workers (and in Holland’s case, a real lineout guru) but for me, a lack of that top end grunt you need in the second row when it comes to the very specific set of skills that an attacking maul requires.

Here’s a quick example of what I mean;

Leinster challenge in the air but also manage to nail us back at the point of landing. We just can’t stop that initial counter surge and the point of our spear collapses.

Here’s a further example of what I’m talking about. First, look at the point where we take the ball in the lineout – the front.

This is to be expected. Leinster would assume that we were going to go to the front here and would have been planning a strong counter shove on landing. Ruddock gets trapped on the floor under the maul after a failed sack, which impedes our initial motion but we don’t get the initial strong surge we need to get this going. You can see Holland moving in as a spoiler in front of Copeland to break up Leinster’s front wall but don’t manage the landing with the power that a Kleyn, Grobler or even an O’Shea would bring here.

Leave Ruddock grabbing onto Copeland’s ankle on the floor aside for the moment – (Law 17.2 D would have this as a Munster penalty in my opinion) – we’re just not getting the strong push from the front that we’d get from a specialist second row. Worse still, our maul is starting to peel to the side which means our flank is getting exposed to Leinster’s counter shove.

With the flank getting gobbled up, Leinster can get onto the ball carrier and sack the maul for a big turnover and a big turning point.

Remember – it takes less energy to successfully defend a maul than it does to attack with it, if your defensive effort can read the point of landing.

Leinster read our point of landing here because – in fairness, we were hardly going to throw anywhere else at this point in the game.

Our lack of ballast and a noted strong jumper meant that we had to a little more inventive in our lineout play. We moved a lot of ball wide and, on certain defensive throws, shortened our lineout to make it a race into the air – something I’d always back Peter O’Mahony to win.

First, look how deep Furlong has to get to lift Fardy at the front at a comparable speed to O’Mahony. He also has to stay hands on with Fardy to try and shave a few nanoseconds off the counter lift. Compare that with how shallow Kilcoyne has to squat and how hands off he is; this is because most of this jump is O’Mahony himself. It really is remarkable how quickly he manages to get into the air.

On attacking throws, we tried to mitigate our lack of maul ballast with some interesting schemes. This one towards the end of the game was very nice.

We throw a maul feint with Stander the target for the tap down off the top. Lovely action – Stander is coming in as he would for a maul and Leinster bite in completely. Watch out for this one at the weekend with a pass to Marshall or Scannell down the blindside.

In general, we had to work a little harder than normal for clean ball due to Leinster being confident enough that they could prevent us gaining ground or penalties from our attacking maul.

This meant a lot of ball to the tail, disguised with quite a bit of motion.

Ignore the fact that we spilt this in the air. I mean, we scored a try directly from the spill so we can forgive it – look at the movement.

Copeland’s feint at the front triggers Toner and Fardy to the front and the middle. Stander starts as halfback to feint a maul on Copeland’s landing spot but ends up stepping in as lifter for Holland. Holland spins around to feint a lift on O’Mahony before turning back towards the throw to go up at the tail. This one caught Leinster cold at the tail with four players caught at the front. The ball didn’t go to hand, but watch for similar detailed movement this weekend.

For me, the key point of maul defence is reading the point of landing. If you can tell where the maul will form, you can beat the attack to the punch and kill their maul before it has a chance to build momentum. Our motto;

It takes less energy to successfully defend a maul than it does to attack with it, if your defensive effort can read the point of landing.

Munster were excellent at this against Leinster and prevented a heavy pack from gaining any kind of momentum.

There’s a lot of Leinster movement here – Fardy feints hard, Ruddock chops in and out of the line – but the key man here is Jack McGrath. If you spot the lifter, you spot the jump. O’Mahony reads Jack McGrath’s positioning and footwork, sees he’s the lifter and can ignore almost everything else to focus on timing the counter shove. When Toner comes down, we nail him in unison and stop Leinster’s maul before it gets a chance to get going.

That strong counter shove exposes Leinster’s flank and Stander gets in on the ball carrier. This was called as a penalty against Stander for changing his bind but, for me, it was quite harsh. Especially considering Leinster would receive a vital turnover later in the game in an almost identical situation. But that isn’t what this is about – the point is that our maul defence was smart and well positioned, which negated our weight disadvantage completely.

Here we see it again. This is a long GIF, so let it play out.

What do we see? We read the point of landing and, crucially, get Peter O’Mahony spiking into the maul drive shaft to kill their forward power transfer. He’s rolled the dice here given how close we are to our 5m line – he hasn’t changed his bind since the land but a lot of ARs would blow up for “swimming up the side of the maul” here. O’Mahony’s spike exposes Leinster’s flank and Holland gets hands on to stop the maul dead.

And here’s an example of good maul defence and bad attacking power transfer.

We get our landing point wrong – but not wrong enough to slow our counter shove. O’Mahony is the key man here again in that he gets under Toner’s arse before the big man lands. By forcing the counter shove under Toner’s centre of gravity, Leinster’s giant lock can’t transfer his power through the “point of the spear”. As a result, he’s actually helping Munster’s counter shove by spreading Leinster’s push over a wider area. Look at how high his arse is and how he can’t keep his feet underneath him!

We’ll need all this maul defence and inventiveness this coming weekend. I’ll deconstruct Castres lineout in the Red Eye this week. Should be fun.