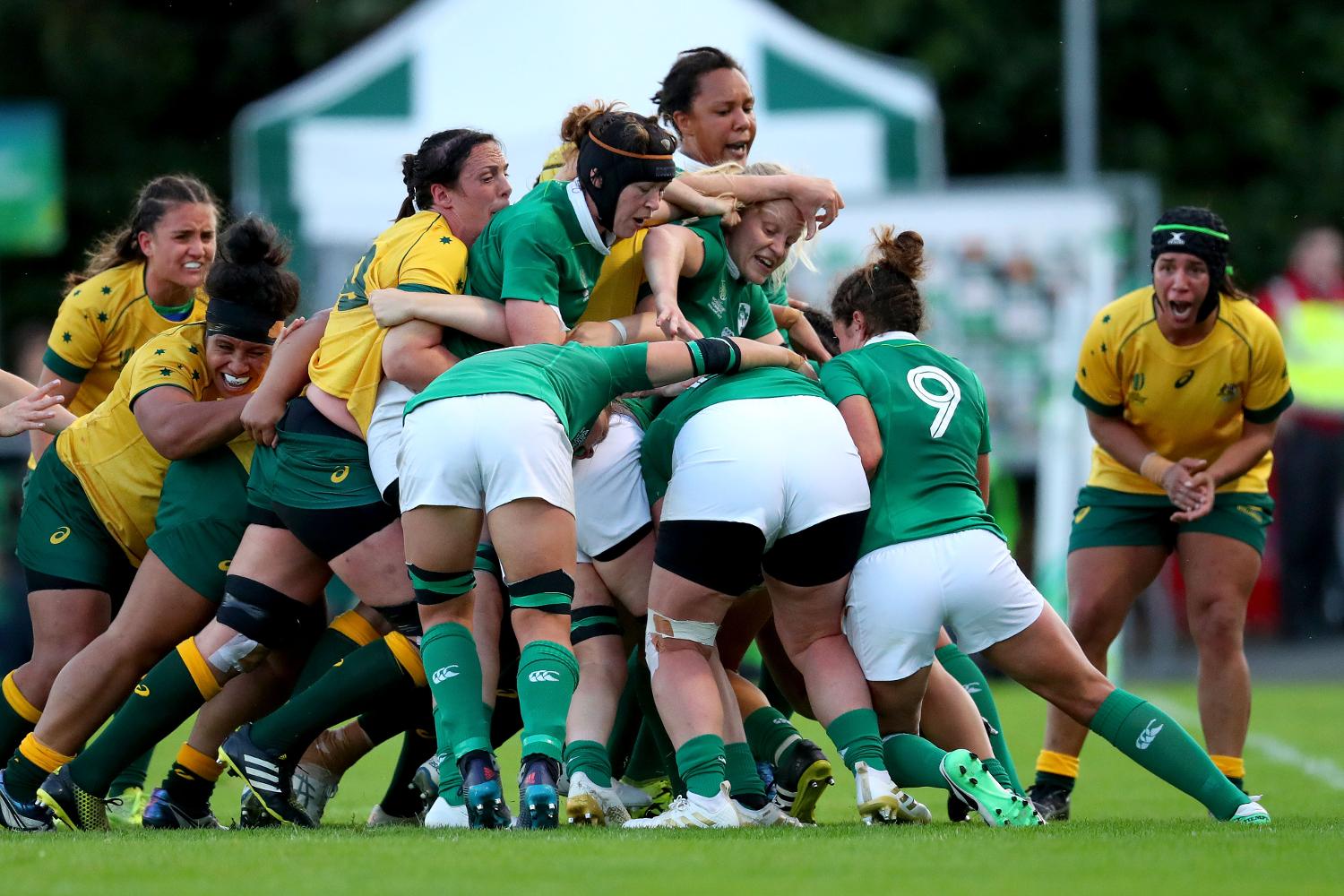 Your opponent will always hide their weakness in how they present themselves. The key is to find out what their movements are trying to hide and then exploit it. Every team has a weakness that they’re trying to mask with an equal show of strength on the flip side. In rugby, this is mostly seen in your defensive layout because it’s the picture you’re presenting to the attack and the key is to bait the opposition into attacking you where you’re comfortable and avoiding where you feel weakest.

When Australia lined up with a 13 up 2 back defensive line against Ireland in the opening game of the World Cup this week, they were doing two things; they were challenging Ireland’s hands to exploit the space on the trams that a 13 up 2 back system entails and, in doing so, trying desperately to avoid Ireland kicking for territory.

Australia hid their real weakness  – their lineout – by giving up space out wide that Ireland couldn’t resist trying to exploit.

And it almost worked; Ireland eked out a narrow 19-17 win but from an Ireland perspective, this was a game we could have easily lost. Having watched the game back a few times, Ireland seemed to give up our most powerful Winning Sequence in favour of attacking where Australia felt most comfortable.

Winning Sequences are a term I use to describe the successful chain of events that lead to a win in a game.

Munster used their good kick chase, territorial kicking game and strong defence to force errors that their strong scrum and heavy forward carrying could then punish. This is how Munster won a lot of big games last season.

Ireland’s performance on Wednesday night showed that their Winning Sequence needs a bit of tweaking and, in my opinion, could do with being a lot more conservative. Ireland’s game plan could have done with more kicking and less ball through the hands, at least based on my analysis of this game versus Australia.

When we attacked the Australian lineout, we invariably disrupted their possession and, at the very least, forced them into defensive carries. In Maz Reilly, Ireland have a superb defensive lineout option capable of disrupting any team’s throw – so why don’t we use her as an offensive weapon by kicking more in loose play?

In this GIF, she disrupts an Australian ball just outside the Irish 22;

Now the throw isn’t straight, but look at the height she gets; that’s a formidable challenge for any hooker and jumper combo to get around. Ireland’s defensive pod is really quick into the air here too, especially with Australia getting in the air a good half a second before Ireland.

This next one is even better;

How Ireland didn’t win a penalty here is between the ref and his TMO but look at how cleanly Reilly beats her opposite number; she’s got a smooth, quick jump, an excellent lifting pod and it looks like this ball could’ve been thrown to her it’s that clean a steal.

Reilly’s physical attributes – she’s 6’4″ with a huge wingspan – allow her to disrupt the lineout from everywhere in that she doesn’t need to get up in front of the jumper;

This has all the hall marks of her lineout work; smooth jump, long arms and efficient disruption of the set piece. She was the Player of the Match by some distance and ended up with 5+ lineout steals but she should and could be used to much greater effect.

Australia’s defensive set up in phase play was leveraged to avoid as many defensive lineouts in their own half as possible. That’s why they kept as many as three players covering the back field on phase play – the only reason you’d do set up this narrowly is to mask your problems at lineout.

When you have two or three players in the backfield you concede the wide channels to make sure that any kick into the backfield gets covered to avoid any defensive lineouts deep in your territory.

There are two kinds of defensive lineout; one where you’re defending an opposition throw, and one where you’re throwing close to your own line for any loss of possession to be a serious defensive threat. When your lineout is in trouble, your own throw is almost as dangerous as the opposition.

Australia had a lot of trouble here, as I’ve detailed, and they didn’t really disrupt Ireland in a similar fashion. Ireland’s lineout looked really good and we showed an ability to get the ones we really wanted when we wanted. This one to the tail in the first half was a great example of throwing technique and jumper variation.

Look at the way Ireland use Reilly as a decoy to separate the Australian rear lifting pod – giving clean lineout ball at the tail on the half way line. Australia didn’t have this kind of platform and we really should have punished them more than we did.

Ireland are a serious threat to any side’s defensive throw but to fully exploit this, we need to kick more of our possession. Better use of the boot in open play would be a great addition to our arsenal, especially in the tightened format of this World Cup.

Watching the game back, our kicking was incredibly limited in its scope. I can think of few kicks from open play that had any intent on them, especially from our half backs. Kicking, when done right, can be a hugely effective weapon for exhausting the opposition and Ireland didn’t really do it at all against Australia.

When you have defensive weapons like Jenny Murphy (who’s got more big hits than Coldplay), Sene Naoupu, Lindsey Peat, Heather O’Brien, Claire Molloy, Cliodhna Moloney and others you can really punish teams without the ball and “soften them up” for later in the game. Kicking allows you to move the play into the opposition’s half of the pitch and put their skillset under serious physical pressure in an area where you can win scrums and penalties.

When you kick well, you can hurt the opposition on their ball and force mistakes – as long as you make your tackles.

The way Ireland set up against Australia put an awful lot of pressure on our own skillset and gave the Wallaroos a foothold in the game that they should never have had. Essentially, we ran absolutely everything. Some smarter use of the boot and a slight tweak to our alignments on phase play would have been just what the doctor ordered.

When Stapleton took the ball in this instance, I’d have liked her stabbing a ball in behind the fractured Australian defensive line for someone like Considine or Miller to chase. Instead, she feeds a wide pod of front row forwards and while we make good ground, we have to work hard to retain the ball and were lucky enough to win a penalty that could have easily gone the other way. We’re working hard and keeping the ball in hand but we’re using a lot of energy at the same time.

For me, Ireland were almost working too hard. Take this example from the second half when we were already seven phases into a sequence;

It doesn’t look like much but when you look at it a little closer you can see the opportunity we didn’t even look at; Australia have 14 players in shot so any kind of kick over the top here would have been into space and put Australia under huge pressure but instead, we’re just using up our finite number of impactful carries on a full Australian defensive line for no real gain and we turn the ball over a phase later.

And this reluctance to kick didn’t just cost us energy in the carry, it cost tries too. Look at this example from the last 10 minutes.

I’d want my 10 kicking the synthetic leather off the ball here but instead the ball gets shipped on to Naoupu and while she does well initially, the ball gets turned over just outside our 22 and Australia end up scoring a few minutes later. It didn’t have to be a wonder kick – even a straight blast down the middle of the pitch would have done the trick as Australia had all their defensive numbers on the openside – but the pass inside did nothing but draw Australia onto our carrier and increase pressure on the ball.

Better kicking here would have relieved the pressure on our line and brought the play into the Australian half where we could have forced a handling error in contact or, at the very least, kept Australia hemmed in where they couldn’t hurt us. Instead we played too much ball and let Australia back into a game that they had no right to be in.

A little more conservatism from Ireland is just what the doctor ordered as far as I’m concerned. Either way, I’m looking forward to seeing how we handle the unique challenge Japan pose this Sunday.