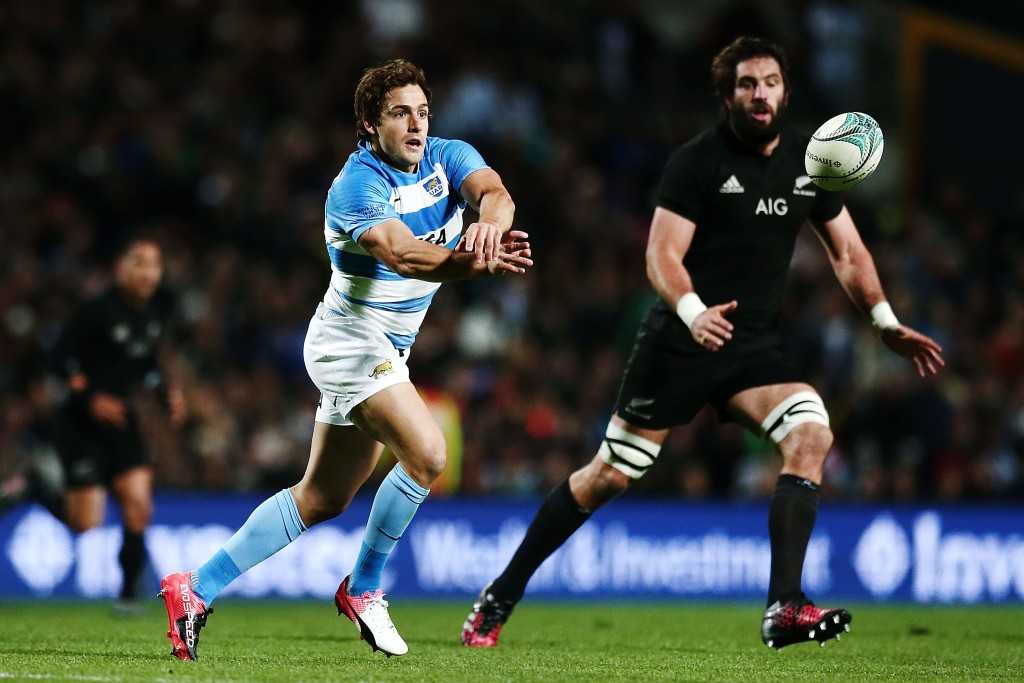 “Oh great,” says you, “another rugby article that compares the movements and strategies within a game to the tactical demands of warfare.”

I know it’s a monstrous cliche to use Sun Tzu as the start to an article like this but stay with me here. Against Argentina, Ireland had one key advantage in their attacking intentions – the structural weakness presented in the Argentinian set piece defence by having Sanchez defending the 10 channel off scrum and lineout.

The weakness is so pronounced that it’s a surprise they have him defending that channel at all.

On phase play, they move him as far away from the point of the ruck as they possibly can.

Compare that with Sexton’s ability to front up to heavy traffic like an inside centre and you have some idea as to why he’s so crucial to everything Ireland do on either side of the ball.

Here he is stopping and then stripping an #8. Having a flyhalf that you don’t have to cycle out of heavy traffic is an organisational god send for any defence. Argentina don’t have this luxury but, that said, they are quite good at hiding Sanchez in phase play. When they do that effectively, you can’t get the targets you need to Hurt Sanchez in defence.

We can pretend that teams don’t try to do this to opposing lynchpins but it isn’t the reality. You might not go out to specifically injure a guy but let’s say that if you know a guy isn’t the best tackler, or if he’s just back from injury, it would be a very charitable rugby side that wouldn’t target that player repeatedly.

On Saturday, Ireland attacked the 10 channel (directly or indirectly) on set piece again and again, with every target being successful to a degree.

I assumed they would look to do this and an interesting shadow game was the lengths Argentina went to avoid kicking the ball out for lineouts. Ireland only had 9 lineouts for the entire game which would be low by regular standards when you consider that Argentina kicked the ball 17 times. Each of those kicks was to avoid the lineout at almost any cost.

Look at this kick here – they had just successfully completed a defensive lineout on their own 5m line and had free reign to kick this as far into the stands at possible but instead, they did this;

That isn’t a mis-kick or, if it was, it was one he’d repeat again and again. Argentina were willing to risk a kick transition to avoid defending the lineout. Why?

Let’s have a look;

A minute prior, Ireland had sent Bundee Aki straight up the 10 channel at Sanchez with Farrell on his shoulder. Sanchez had nothing for him in the tackle and bailed out after the initial contact. We made a good 6/7m post contact which is nightmare stuff on lineout defence.

Argentina did a good job limiting his exposure to Ireland’s set piece attack because we were able to attack him directly and indirectly almost every time.

The problem with a player like Sanchez is that you have to bring others around him to cover his channel in cases like the above where he bails out of the tackle.

Here’s a quick GIF on how Ireland narrowed the attack on Sanchez, forced the 12/13 to squeeze on in the 10 channel and then spring the ball to attack the space created out wide.

This particular instance wasn’t successful, but you can see where the space is and how Ireland were able to create it by feinting traffic into the 10 channel and then springing wide. Schmidt will probably look at Aki’s pass being half a second too late back to Murray’s loop as the killer here.

Argentina did a good job limiting the amount of scrums they gave up too – we only had 5 all game. We did play a fair bit of advantage on their knock ons though as I think we were a little wary of their defensive scrum as the game wore on.

We did do major damage on the scrum set piece for Stockdale’s try with Sanchez the key target.

Let’s have a look at the action straight off the scrum;

Look at Sexton taking a slight drift on his action to draw Sanchez away from the tail gunner and into Aki’s line – ruthless stuff. Aki’s carry has such impact that it hurts Sanchez’s shoulder, and he’s forced to stumble into the line with no ability to defend the next phase.

Sanchez is so keen to get out of the line he actually cycles across the “C” defender on the next phase – about as cardinal a sin as it gets. That forces the 12 and 13 to zone in on Farrell to cover the space left by Sanchez and Ireland can attack the space on the outside edge.

This was about as perfect a targeting as you can hope to achieve in the test arena. Ireland’s only concern was that they couldn’t do it more often.