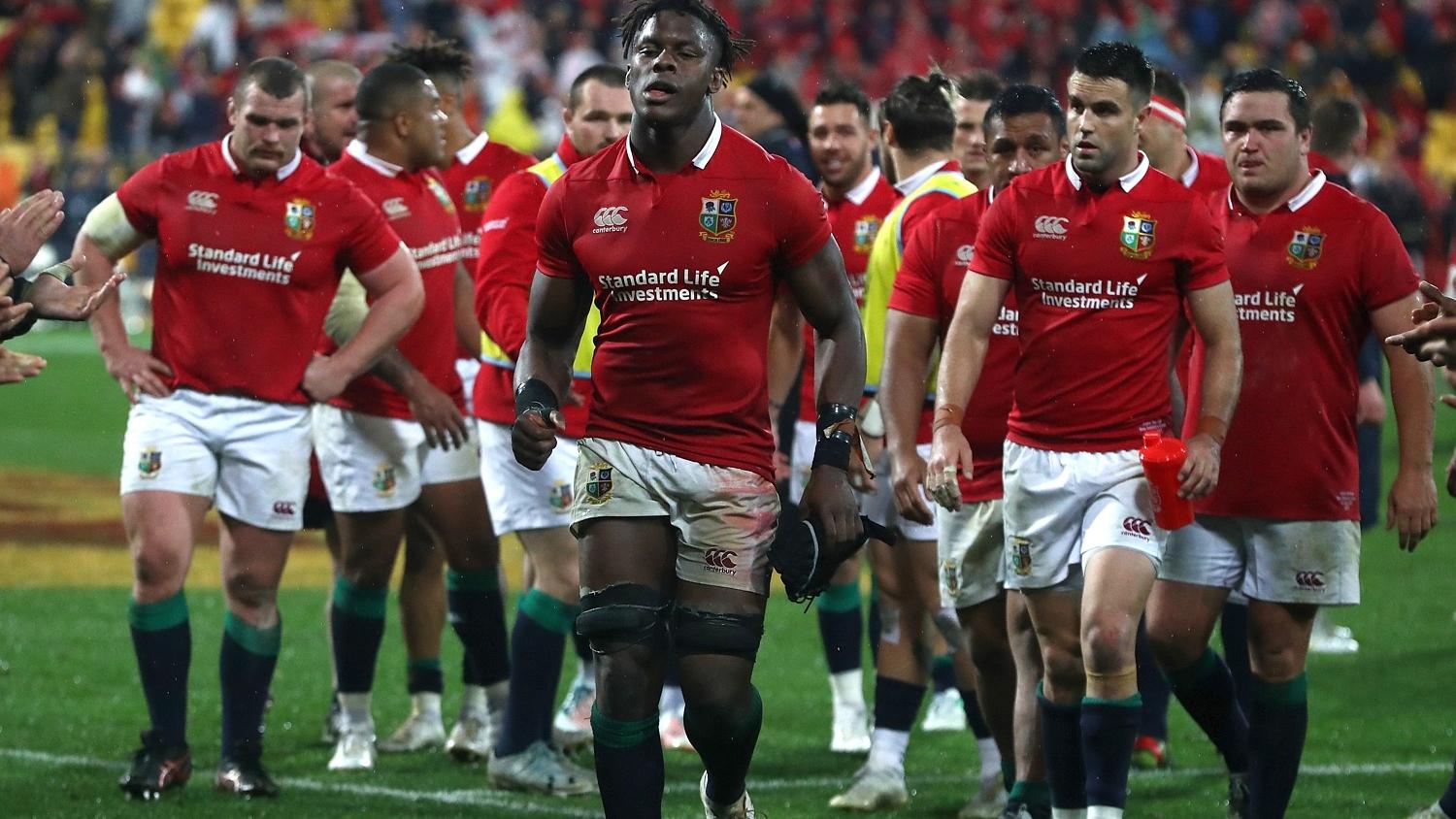 “The fight is won or lost far away from witnesses – behind the lines, in the gym, and out there on the road, long before I dance under those lights.” – Muhammad Ali

When the British & Irish Lions edged out the All Blacks at the Westpac Stadium in Wellington on Saturday morning, I couldn’t help but think of the above Muhammad Ali quote. This hugely physical win was built on a pack performance that was worked on since the first review on Sunday morning after test 1.

Sure, the heavy leather was dealt out on the pitch, but the prodding and fire that went into taking this performance from board to pitch happened in the meeting rooms of the Lions pre-game.

Last week, the All Blacks vaporised the Lions front five. Embarrassed them. The Lions would have been confident that, whatever about anything else, the front five would at least go toe to toe with the All Blacks but that was far from what happened. With the front five losing collisions on the fringes, the back row were always forced to firefight and the Lions “no ruck” defensive system got taken apart at the seams. The All Blacks went straight up the middle of the pitch for their important scores with one out, fringe passes.

This ruck map show’s their narrow progress up the middle of the Lions defence. It is the kind of thing that Andy Farrell will have been hammering home to the pack this week – “This cannot happen again.”

You can imagine the sessions this past week – highlighting where the All Blacks physically dominated their opposite numbers, how many times they stuck one on and beat up the Lions.

“Behind the lines, in the gym, and out there on the road” the Lions coaches and players will have prepared for the war to come in Wellington. If they lost this forward battle as they had done the week prior, the series would go with it and an ignominious 3-0 series loss would surely have followed.

This week, the Lions made some changes in personnel and – almost more importantly – in their defensive alignment. The flankers had more licence to step in and hassle the contact area but this wouldn’t be worth a damn if the front five didn’t put it up to the All Blacks.

Battles like this aren’t one with one decisive moment. They’re won by building up little victories. They’re won by generating rhythm and momentum in the physical collisions. The early exchanges are hugely important in this battle because it allows you to show the opposition and your team mates where you’re at mentally and physically.

The Lions’ approach to the forward exchanges was focused on working the All Black front five – tiring them, hurting them and taking their energy.

Take this attacking scrum 7 minutes in as an example;

Whenever I see a hooker as accomplished as George not striking the ball, you get an idea of the Lions focus in this scrum. They wanted to leave this one in as long as possible to put the squeeze on the All Blacks front five. Look at the pressure here! By keeping the ball in the second rows for 7 (!) seconds they put a serious strain on the All Blacks engine room. This kind of scrum rewards you later in the game.

Further to these kinds of engagements, we have to also look at the carry outside the context of metres gained. Sometimes – not always – you want to use your time on the ball to bludgeon the opposition. I often see teams criticised during games for making one out carries and playing up the guts rugby with palpable metres gained.

Not every carry is there to bust the line. Now, obviously, if it ends up busting the line – great – but sometimes you want to work the opposition on a carry. Make them stop you and then hurt them at the ruck.

This carry directly after the scrum I mentioned is a good example. There’s no intention from the Lions to run anything off this play, just carry hard into Kaino and see if Itoje can stick one a defender coming over the top. This carry was just a platform for the Lions to let the All Blacks know what they were about. The earned less than half a metre over the gain line, but the energy expended here was worth it. This was the way the Lions approached these early exchanges – with an intention to dominate.

This was the way the Lions approached these early exchanges – with an intention to dominate.

Around the 14th minute, the Lions tight five made their biggest statement to the All Blacks in the early exchanges with a superbly physical defensive set. Nobody wants to be defending too much in a game, but it’s often an opportunity to hurt the opposition and steal a little of their belief.

These exchanges are where the Lions lost out badly last week, so making an early declaration that it wouldn’t be happening again.

First up – Itoje and Vunipola on Cane with Kaino and Taylor assisting.

Great line speed from the Lions lock and loosehead, and they make a solid slowdown hit that stops the All Blacks just behind the gain line.

Furlong’s excellent speed off the line makes a “corner” for Warburton to make a good hit on Whitelock that plants the All Blacks behind the gain line again and looking at a wall of red jerseys on the next phase.

Alun Wyn Jones and Jamie George stop Retallick behind the gain line again and the All Blacks are forced to burn Taylor, Cane and Barrett in the ensuing ruck. Jones and George make a good job of dirtying the ruck without committing to it either and the Lions have plenty time to reset Furlong, Vunipola, Itoje and Warburton on the fringes, ready for the next set.

Retallick would crawl out of the tackle here (I have a suspicion he was held) and make an extra metre but the Lions comfortably track it.

Another gain line loss for the All Blacks. After Retallick’s clever crawl on, the All Blacks had gain line for the first time in a few phases. The Lions slowed the ball down through Jones and George on the previous phase and the defensive line was well set.

This Whitelock on O’Brien, with Jones and Warburton assisting. Good strong hit from O’Brien, and strong support from Jones. What stood out to me here was Warburton’s strength in contact under massive pressure from Kaino. Look at it closely – blindside on blindside – that’s massive strength from Warburton to withstand Kaino like that. Both guys will have registered that micro-battle and who won the physical contest.

Overall, this is slow, manky ball for the All Blacks and they’ll have known that they were losing this sequence physically.

Unlike the Lions earlier work, the All Blacks are losing the gain line collisions, burning guys in supporting rucks and going on a slow backwards march.

Another dominant hit – this time from Itoje on Reade. Read takes this a great pace but Itoje forces the spill, which Warburton mops up to regain possession for the Lions.

Ultimately, this would end in a scrum for the Lions but this set of defensive pressure from the Lions was a declaration of intent that what happened the week prior wouldn’t happen again.

Two minutes later, Itoje would make another big play – this time at a maul.

Kaino takes smooth ball at the front, transfers the ball for a shift drive but Itoje makes a powerful surge up the middle. He swings his left arm over the top, latches onto the ball, forcing the turnover.

This was a huge physical win for the Lions in the context of the game as a whole. It’s one thing to turn over a maul up the field, but another to take one from the All Blacks that they really wanted.

And then, in the ensuing schmozzle post turnover, Jones wasn’t long showing his opposite numbers what was up.

That’s what I want to see as a coach – guys ready to fucking rock, sickening their opposition. Jones was backed by Gatland by keeping his place and he showed up to fight – big time. Look at Farrell right in there too – great to see.

The Lions showed up ready to go out on the shield physically and they certainly made themselves felt in the first quarter, where so much mental and physical warfare is conducted.

ADDENDUM: Ultimately, I thought these exchanges were particularly interesting in the context of the red card, mainly because Hansen chose to sacrifice Kaino in the aftermath. That “polluted” the forward battle for me, as Hansen (rightly), reckoned shoring up the midfield was a better tactical option in the aftermath of Williams’ lunacy.