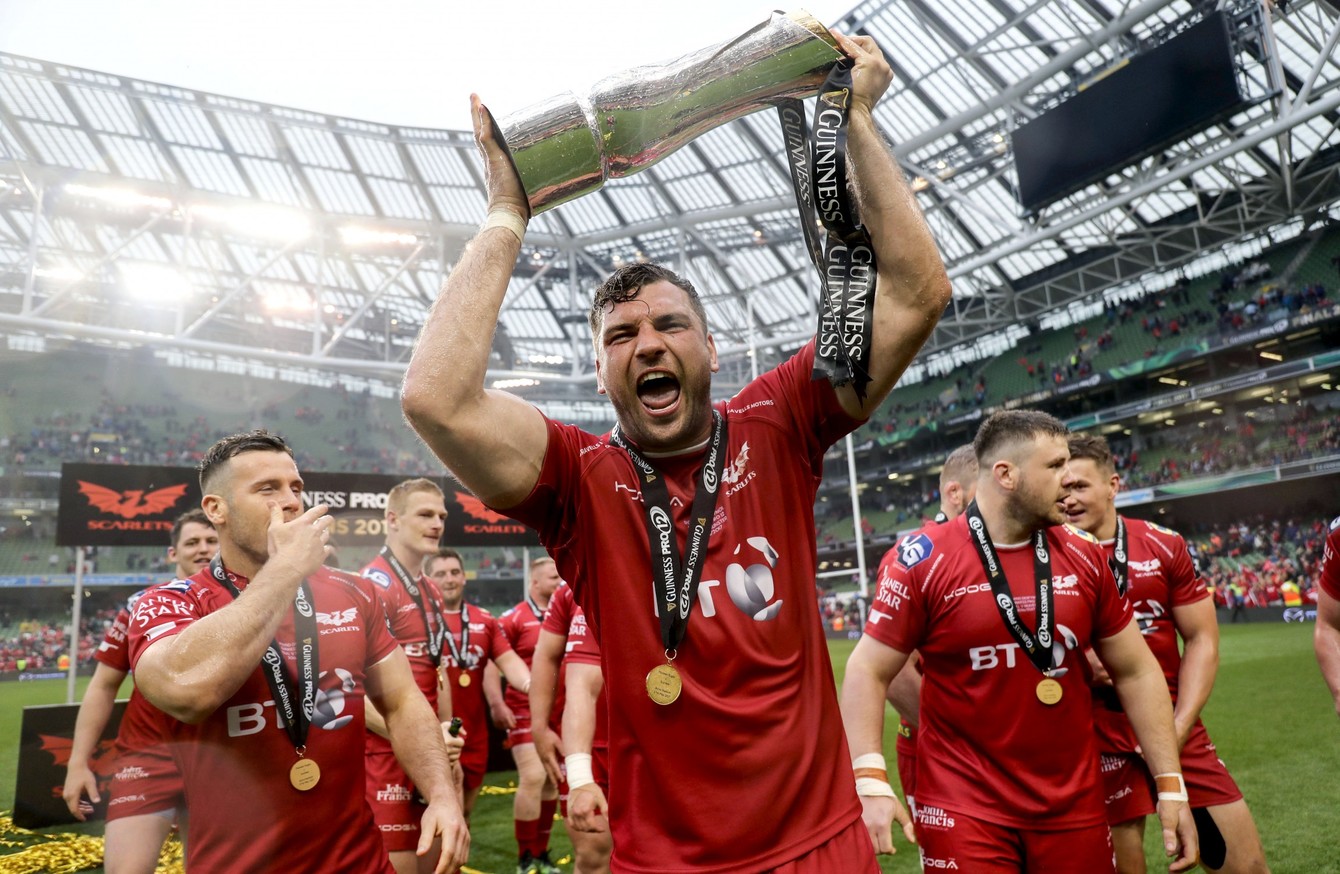 The GIF Room :: Feel The Beirne

When I got the word that Tadhg Beirne was going to be joining Munster next season, I was a little conflicted. Sure, he’d just battered Munster around the Aviva in the last ever Pro12 final but was he The Real Deal™ as a front line signing?

To examine that, we have to look at why and how Tadhg Beirne was signed. First, we have to acknowledge that at this point, Beirne is still very much a Scarlets player so my work here is more to show Munster fans what to expect from this guy, rather than throw the mockers on another team’s player. With that out of the way, let’s get into the detail.

The push to bring Beirne back into the Irish system started last season and was coming to a head around the time of the Pro12 final. Beirne – rightly – showed some loyalty to the Scarlets by signing a one year extension to the one year deal he signed at the start of last season but a one year deal basically means you sign it in March and reopen negotiations in July. All in all, given he was probably the best Irish lock in the club game last season it was incredibly likely that a return to Ireland beckoned after his one year extension – the only question was where he’d end up.

Connacht was always unlikely. Ulster would be a difficult sell with Iain Henderson already in situ as a loosehead lock – given that’s Beirne’s ideal position, it would seen to be a poor fit. Leinster have Toner on a central contract for the next three years, Scott Fardy signed up to play in the second row for two years and James Ryan in place as one of the most high potential second row prospects I’ve seen anywhere in Europe in the last 10 years – no room there, you’d think.

So that left Munster. We have Jean Kleyn lined up as being the first choice tighthead lock going forward so signing a potential first choice loosehead lock of Beirne’s quality made a lot of sense, especially in the aftermath of Donnacha Ryan deciding to take up a contract at the tail end of his career in Paris and a number of our young locks being 2/3 years out from maturity.

So what kind of guy have we signed? We’ve signed an athletic loosehead lock forward that can – potentially – play on the blindside even though we’ve 100% signed him as a second row going forward. I know “loosehead lock” will get some people’s eyes rolling like a slot machine coming up lemons but it really is the best description of his abilities. And it’s those abilities that make him such a stand out signing.

When I got the word that Beirne was on the way in late July, I naturally went on a bit of a GIF hunt to get the detail on his game. There’s the turnovers – and I’ll get to them – but the thing that stood out to me was his engine. So much of the modern second row game is based on mobility and cardio; Beirne has both of those in spades.

Here’s an excellent example of his pace as a second row; Watch Beirne in the blue scrum cap when turnover happens.

He starts behind the halfway line and is right there to shove Munster back over the touchline when the ball breaks. His pace here is outstanding for a second row forward.

One look at any of his performances and you’ll see this pace and with it, near constant motion. In the Pro12 final, there were a few defensive sets where he literally pillared five rucks in a row across the pitch having originally started out as the line speed leader in midfield.

Sometimes saying a lock is “mobile” and “pacey” is doublespeak for “he’s not that powerful” but that certainly doesn’t stack up when it comes to Beirne. He’s got some serious beef to throw around.

Look at this standing maul he gets moving in – again – the Pro12 final.

Look at him powering through this Ulster maul in the Pro14 a few weeks back;

He did the same to the Munster maul in the Pro12 final. Look for the blue scrum cap.

That’s power, agility and dexterity to get in and sack a maul that’s going forward at a decent clip. Impressive stuff.

Sure, he’s not a maul killing monster like Jean Kleyn – few are, really – but he uses his natural mobility and footwork to get real value in his maul defence and, indeed, every physical contact he engages in.

I’ve been asked a few times if Munster’s style will suit Beirne. Those that ask that question really haven’t been playing close attention to Munster’s second row play this season – Billy Holland in particular. Beirne’s attacking ability with ball in hand will certainly come in useful for Munster, especially on wider plays.

This pass doesn’t look like much but it basically kills the Munster defence and sets Scarlets up for a try. It’s a bit of a meme to expect Munster to try and turn him into a fringe carrying heavy hitter but that certainly won’t be the case. I’d expect to see him used very similar to how he is now for Scarlets.

In contact, Beirne isn’t a guy that’ll mess you up man on man with raw power but, again, it’s his footwork, intelligent body positioning and mobility that stand out. Look at this leg drive here;

That leg drive is a real hallmark of his work with the ball in hand. Here he is landing the killer blow against Munster in the final – look at the footwork before contact, the shoulder shift and the leg drive to get over the line.

We know that Beirne can move, can pass the ball and can work his maul defence but what’s he like in the rock solid basics of lock forward play? The answer is; really good. Honestly, it really isn’t any major surprise that the IRFU/Munster were making a big play to get this lad back in the system.

His loosehead scrummaging is really good, for the most part – nice straight back and good power transfer in the legs. Pair him up with the likes of Jean Kleyn and you have a serious scrummaging second row unit.

His lineout work is good on both sides of the ball. He’s a good pattern reader and he’s really quick in the air on opposition ball;

He read this throw pretty well and was a hair away from getting in ahead of O’Donnell.

On his own ball, he’s a good handler, a quick jumper, an excellent maul platform and he’s got good timing. For me, any top loosehead lock shows their worth when they’re taking a ball at the tail of the lineout – the timing, speed in the air and handling (both in maul and pass situations) are stressed the most here.

He’s really good here too. His basics are top notch in almost every way you could look to judge and they aren’t even his best quality.

Beirne’s standout quality for me is his work at the breakdown, where’s an absolute monster over the ball on attack and defence. His timing, speed and dynamism in contact mean that he’s a reliable ruck hitter on your own ball and an absolute no pants and shoes in school nightmare on defensive sets.

He’s not top of the turnover charts in the Pro14 this season so far and, indeed, since January.

We saw that first hand in May;

He lurks right by the “C” defender like a backrow, gets a fantastic wide base over the ball and gets the steal.

Look at him do the same here against Toulon in last season’s Champions Cup;

He tracks the contact, spies the separation between carrier and cleaners and makes a go for the ball with a wide, powerful base. He’s under heavy pressure there but survives the clean to get the steal.

Look at this steal 20 seconds to the Scarlets’ game against Ulster this season;

He tracks the kick with that pace, times the contact and is on the ball like green on grass. He’s got the ability to be a wide second row defender, a fringe tracking fringe defender and give you jackal options over the ball all over the pitch.

Ruck defence like this is the next frontier in defensive evolution and in Tadhg Beirne – and Cloete – Munster have signed the exact personnel they need to compete here.

As second row signings go, he’s as good as we could have hoped to get whether they were IQ or not. I, for one, am looking forward to seeing him in the red of Munster and, possibly, the green of Ireland in the next year.

If you’re not a premium member, you can gain access to all my TRK Premium content for as little as $2 a month on my Patreon page here.