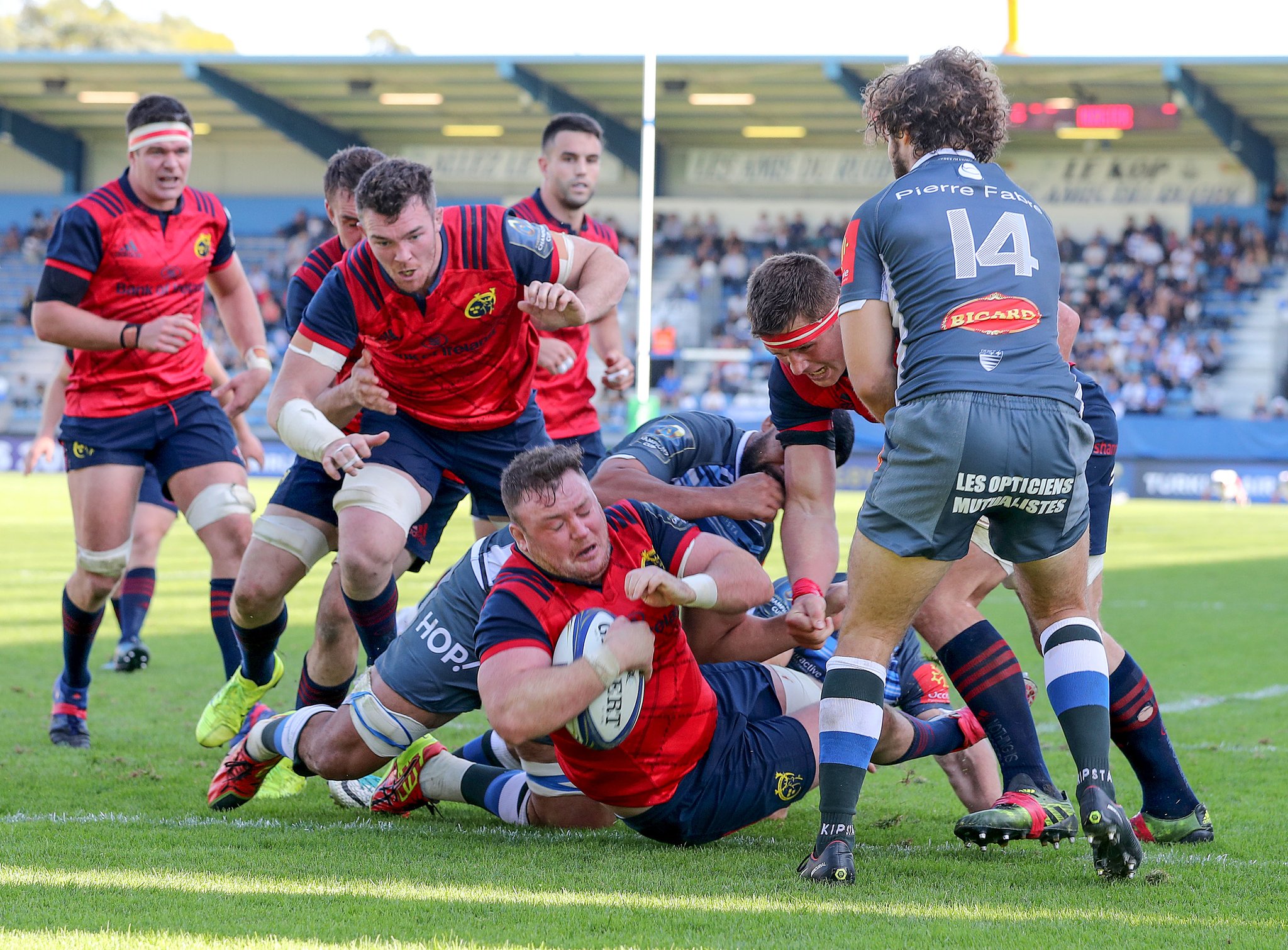 In January, these two points garnered in the south of France may well seem like a net positive for Munster but in the direct aftermath of a nervy, sloppy performance like this, let’s call these two points what they are; two points nabbed from the jaws of a last gap defeat.

First of all, let’s put this draw in context. The last time Castres played European Rugby in this stadium, they drew 24-24 against a mightily relieved Leinster side so, in one way, we shouldn’t be too shocked at the intensity of Castres’ performance. As I wrote pre-game, this is probably the worst time to take on a side like Castres at home. This game is probably the one home European tie this season where they won’t have to mentally square away any Top14 concerns and they played with the freedom and physicality that implies.

From a Munster perspective, there was a way to win this game as I mentioned pre-game. That is to say; pace on the ball, accuracy at the breakdown and direction from 10. It’s the French Recipe – and it’s easier written than performed – but there was precious little of those ingredients on show for the 80 minutes. Early on, we just couldn’t get hands on the ball and that invited phase after phase of heavy Castres possession. Yes, our defence held up to that examination but it produced a yellow card from Conor Murray and almost the same for Simon Zebo a few minutes later. Good maul defence (which would be a constant) would see Munster escape the hairy situation landed by the sin bin. A frantic reaction from Chris Farrell at first receiver on a nothing phase would undo that good work a few minutes later though, and see Castres striding under the Munster posts after an intercepted pass.

It was was nervy, muddled and symptomatic of much of Munster’s work in this game.

The wind played a factor, of course. A manic breeze whipped over the top of the stadium and snatched any ball that went above the blue roof of the Stade Pierre-Antoine. That directly affected a lot of Munster’s exits in the first half and, in a concerning development, a lot of our attempted work with the ball in the second.

With the powerful wind at our backs, you’d imagine that sticking the ball into the corner and squeezing the ropey Castres lineout would be the smart play but, instead, we seemed to play attacking rugby by numbers and, with it, more frantic rugby than the high tempo ball we needed to affect the win we briefly looked like attaining.

The way to beat Castres was simple enough in principle, if not execution. First up, stop them in the scrum and maul – Munster were quite successful here. Second up, they had to work Castres in phase play to gas them out and create space on phase three, four or five.

We needed tempo – instead we got frenetic, hare ’em scare ’em rugby that had very little pattern and useful pace.

For me, a lot of this comes down to our lack of direction at 10. It’s here – at fly half – that we seem least comfortable with our new attacking pattern. Do we kick or move? Do we go wide or come back inside?

On second look, it seems to me that first receiver is where the pace of Munster’s ball slowed and width that initial slowness, our lines and attacking patterns were forced into hurried, snatched possession that was begging for a fumble.

That isn’t to say that the back five was great either. There was some excellent moments from Stander and O’Mahony but not enough to compensate for some underpowered work on phase play and our cleaning out at the ruck in particular. Castres mitigated for their defensive slowness by slowing our ball on almost every carry and turning us over on occasion.

We will need to better because this kind of performance will not be acceptable next week. But we know this.

Overall, it’s probably sensible to stow the two points, hope our rivals don’t beat it, and move onto the looming shadow of Racing 92 in the Big House next week.

We didn’t have many performers playing at their peak here but I thought these lads were the best of what we had on show.

Yes, Dave Kilcoyne gave away a stupid penalty but other than that he was excellent in the carry and rock solid in the scrum. Stephen Archer, Niall Scannell and John Ryan were equally good in the scrum and really fronted up in the face of powerful opposition. A decent showing.

Peter O’Mahony was nowhere near his best but he was an effective presence in the lineout and played an excellent role in our maul defence, which repelled Castres again and again.

Tommy O’Donnell and CJ Stander worked incredibly hard in defence bit just couldn’t make anything stick when they were on the ball. They had a little more carrying duties then I think they would have liked due to that lack of an elite carrier in the second row but the good work in the build up to both tries and O’Donnell’s work rate in defence save them both from a One Crown scolding.

I thought Rory Scannell was excellent, and probably our best player on show. His poor kick lead to the second Castres try but other than that he made some excellent carries, decoys and superb defensive reads.

Keith Earls and Simon Zebo were decent with what possession they got and looked really sharp for the most part. Zebo looked good under the high ball, quick on the counter and took his try well. Earls looked consistently likely to make things happen.

Not great by any means but decent enough.

Not a great show from these lads;

Mark Flanagan and Billy Holland were willing, for sure, but just couldn’t make anything stick in phase play. Both defended reasonably well – Flanagan more than Holland – but neither had the quality in the heavy phase exchanges in either ruck or carry.

Conor Murray had a poor enough game, dotted with one moment of quality – his pass for Zebo’s try. Other than that, he didn’t get anywhere near the level we know he can perform at.

Chris Farrell was well below his best here. His intercept try was a needless mistake when a carry would have sufficed and he never really got into the game afterwards

Tyler Bleyendaal and Ian Keatley were both quite poor, with a number of poor decisions and poor executions between them. I thought Bleyendaal looked incredibly stiff in almost all his movements and looked like he’s either carrying some kind of niggle or, more concerning, a desperate lack of confidence. Keatley came on in a tough spot – with momentum very much against us – but he made two poor enough kicking errors from hand that put us under real pressure and took a few tunnel vision decisions when better options were in play. The kick he attempted was a tough enough one and didn’t really factor in to my rating.

Either way, both players seem to be playing without the pace, variation, gain line depth or decisive thinking we need to make our expansive attacking plan work right now.

I’ll go into our attacking problems in more detail for TRK Patrons in the GIF Room this week as we build to Racing 92 next weekend and look at the changes that personnel will bring to both our attacking and defensive patterns.